The $750,000 Wood Memorial (G1) at Aqueduct over 1 1/8 miles is the major East Coast prep for the Kentucky Derby. In recent years this has been a key race, having yielded Derby winners Funny Cide, Monarchos, and Fusaichi Pegasus. As well, six of the eleven Triple Crown winners used it as their final prep. In the 2006 edition, a field of nine Derby hopefuls went to the starting gate with Keyed Entry sent off as the even-money favorite off his second place finish in the Gotham and his win in the Hutcheson Stakes. Also in the field was 2-1 second choice and California invader Bob and John, coming in off a third in the San Felipe and a win in the Sham. It had been raining steadily for hours at Aqueduct and the track was rated as sloppy but sealed.

When the field was sent on its way, jockey Edgar Prado hustled the favored Keyed Entry to the front, but kept one lane off the rail to avoid the deeper going over the rain-soaked main track. He got the quarter in 23.10 and the half in 46.26 while staying 1 1/2 lengths clear of the pack. Entering the far turn, Bob and John, who had stalked the pace in the three path in third place the whole way, had closed the gap to just 1/2 a length after six furlongs in 1:11.01. Jockey Garrett Gomez timed his move perfectly as Bob and John drew even with the favorite with a furlong to go, then drew clear in the final sixteenth to win by 1 1/2 lengths in a time of 1:51.54. 16-1 longshot Jazil, who sat at the back of the pack early, rallied well through the stretch to pass the tiring Keyed Entry in the last 50 yards to gain the place spot by 1/2 a length. It was 6 lengths back from Keyed Entry to the rest of the field.
Results Chart from DRF. 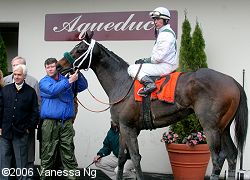 Bob and John in the winner's circle. Winning trainer Bob Baffert (left side of photo) said, "Just goes to show you that there is so much speed in California, it's like a vacation when you get away from there. We tried something different. When he hit the wire, his ears went up and he wanted to shut down. I brought him here because of his style. There is going to be a hot pace at Santa Anita, and I knew he would run much better here. He needs a bigger track. The last time, he was completely wiped out and never got a chance to run and he needed the race. I wasn't really hard on him. I was hoping that if we tried something different, it would work and it did. Good horses run on any track. Garrett (Gomez) rode the horse with a lot of confidence; he's been working the horse the last several times. We've gone over how I thought he should run. When you have a horse that good with that kind of breeding, you know he's going to get better. This was a good test. Keyed Entry is a bulldog. He didn't let us by too easy." 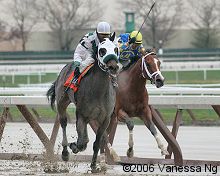 Bob and John starts to draw away from eventual third place finisher Keyed Entry in the stretch. Winning jockey Garrett Gomez said, "He's done everything Bob (Baffert) asked him to do, and he came into this race really good. I had to make some adjustments in this race, and he did everything. I think 1 1/4 will be right up his alley. He had to ship from the warm weather to the cold weather, and he handled the deeper racetrack. Going into the first turn, I had a really good spot, but the 8-horse (Marco's Tale) came over really fast and tightened it up. I checked him out of there and pulled him to the outside. When I ask him, he pretty much stays the same. He's a big, long-striding colt. I knew when I pushed the button, he really wasn't going to go anywhere. He's a grinder. I was very impressed with the way he handled everything." 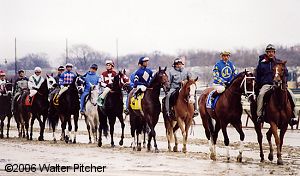 The post parade for the Wood Memorial shows just how nasty the track conditions were. 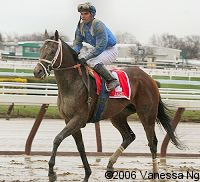 Second place finisher Jazil returns after the race. His trainer Kiaran McLaughlin said, "We're very happy that he was able to close, that's his style. Fernando has been on him his previous three or four races, and he always comes running late. So, we were happy that he showed that same run today again, especially against this caliber of horse. It looks like he will like 1 1/4 and we are sure looking forward to the opportunity." Jockey Fernando Jara added, "I needed just a little more distance. After the wire, he passed (Bob and John). I would love to see him go to the Kentucky Derby. 1 1/4 would be a perfect distance for him. I thought he had a chance to win when he made his move. I'm very happy with this race." 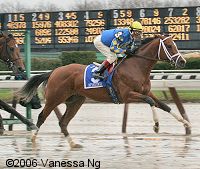 Third place finisher and beaten favorite Keyed Entry goes right to the lead at the start. His trainer Todd Pletcher said, "I thought he dug in and tried hard. Originally, I thought the sloppy track was a blessing. I don't know if that was the case, considering they went the final eighth in 14 seconds. It looked like they were all laboring. It is disconcerting that he didn't win. I don't like to make decisions right after a race, so we're not going to jump to any conclusions just yet. We'll see how he comes out of it, let the smoke settle and figure it out." Jockey Edgar Prado added, "He tried hard, but a mile and an eighth appears to be too long. I was running easy early. He lasted for about a mile, but the last eighth, he just really tired. He tried, and he still will be a very nice horse later on." Asked who he would ride in Louisville, Prado said, "I have one less Derby horse now, but I think (Florida Derby winner) Barbaro is the horse."