The feature race on the final Friday of the 2009 Saratoga meeting is the $100,000 With Anticipation Stakes (G3). The 16,325 in attendance enjoyed clear skies and temperatures near 80. A field of nine 2-year-olds went to post in this 1 1/16 mile trip over the Mellon Turf Course, with Jung Man Scott sent off as the 2-1 favorite exiting an 8 length romp breaking his maiden last out. In to challenge the Richard Dutrow Jr. trainee included 5-2 second choice Paddy O'Prado, winless in 2 lifetime starts but a close second last out, and the two-horse Dogwood Stable entry of Zapster and Golly Day, coupled in the betting as the 9-2 third choice, each exiting a victory in his career debut.

Jockey John Velazquez sent 11-1 Mississippi Hippie to the front first time past the stands and he set early fractions of 23.87 and 48.99 over the firm turf, while as many as 1 1/2 lengths ahead of 10-1 Red Rally who stalked him in second. On the turn, 16-1 Interactif, who was 6th early, came out four wide to take over the lead at the 3/8 pole, getting the 3/4 in 1:12.54. Jockey Kent Desormeaux asked Interactif to draw away and he did, quickly opening up a 4 1/2 length advantage in mid-stretch through 1 mile in 1:35.43. Favorite Jung Man Scott, who was fourth early, put in a strong rally three wide but was left with too much ground to cover, as Interactif cruised under the line 4 1/4 lengths in front in 1:41.41. It was just a nose back from Jung man Scott to late-rallying Paddy O'Prado third. 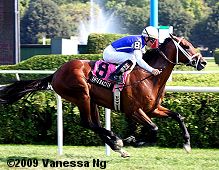 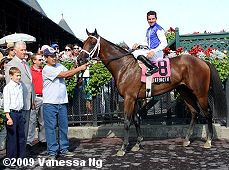 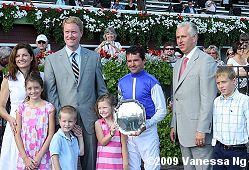 Left: Interactif in the winner's circle with trainer Todd Pletcher on the left with his son. Pletcher said, "It wasn't the plan (to try turf) until he worked on the grass the other day (4f in 48.95). I thought he worked exceptionally well and he has a little turf pedigree on the bottom side. He was a colt that had shown talent, but we thought maybe we were missing a step. It's nice when they produce the way you hoped they would - I was impressed with the margin he won by and the way he kicked through the lane."

Right: Trophy presentation for the With Anticipation Stakes. 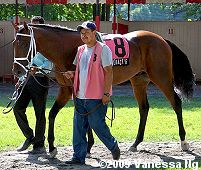 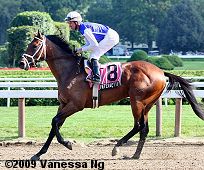 Left: Interactif in the paddock before the race.

Right: Interactif returns after the race. His jockey Kent Desormeaux said, "I think this is a very serious horse. He gave me a serious ride. When I asked him to run, he exploded. He was just floating along the course. His ears were up and he was focused. He was watching where he was going and paying attention to what was in front of him. I was fearful about him being aggressive since he was coming out of those sprint races. Todd knew he would enjoy the grass and I am appreciative of the opportunity to ride him." 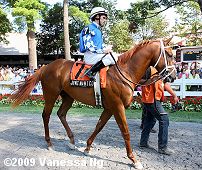 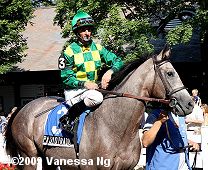 Left: Second place finisher and beaten favorite Jung Man Scott in the paddock. The 2-1 favorite raced in fourth early under regular rider Ramon Dominguez, then rallied three wide on the turn but was no match for the winner, holding off Paddy O'Prado for second money, beaten 4 1/4 lengths. The Richard Dutrow Jr. trained son of Freud improved his record to 1 win, 1 second, and 1 third in 3 starts, earning $52,600 for owners Winter Park Partners.

Right: Third place finisher Paddy O'Prado in the paddock. The 5-2 second choice trailed the field for the first 6 furlongs under new jockey Robby Albarado, came out 5 wide into the stretch and closed well, just missing second place in a photo. The Dale Romans trained son of El Prado improved his record to 0 wins, 1 second, and 1 third in 3 starts, earning $21,347 for owner Donegal Racing. 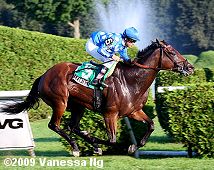 The undercard feature on Friday was the $80,000 Voodoo Dancer Stakes, a 1 1/16 mile inner turf event for older fillies and mares who have not won a graded stakes on the turf this year. Savoir Bien, making her first American start after shipping in from Argentina, was sent off as the lukewarm 7-2 favorite in the field of 9, over 4-1 second choice Belle Allure, third in the Donor Stakes last out, and 9-2 third choice My Baby Baby, exiting a close second place finish in the De La Rose.

When the gate opened, new jockey Jeremy Rose sent 7-1 Leamington to the front and she set easy fractions of 24.09, 48.65, and 1:12.13 while as many as 1 1/2 lengths in front of My Baby Baby who stalked her in second. Entering the stretch, Leamington accelerated away from the field, opening up by 3 at the 1/8 pole. Belle Allure, sixth early, closed late on the outside but was no match for Leamington who finished 1 1/4 lengths ahead in 1:41.00 over the firm course. It was just a neck back to late-running 22-1 longest shot Eissoai third, while favorite Savoir Bien finished fifth. 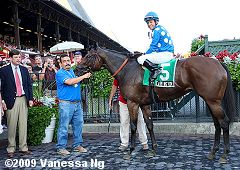 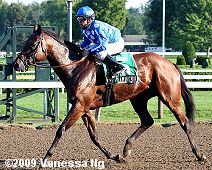 Left: Leamington in the winner's circle with trainer Graham Motion on the right.

Right: Leamington returns after the race. The daughter of Pleasant Tap started her career in England, shipping to America early this year. With the win, in her first try in stakes company, she improved her lifetime record to 4 wins, 4 seconds, and 2 thirds in 12 starts, earning $123,315 for owner Hickory Tree Stables. 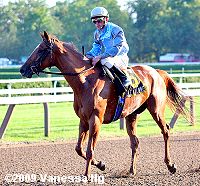 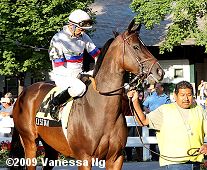 Right: Third place finisher Eissoai in the paddock before the race.