The 2009 Saratoga meeting concluded on Labor Day with two graded stakes races. A crowd of 29,589 was on hand on Monday afternoon, with clear skies and temperatures in the lower 70's. The highlight race was the $300,000 Three Chimneys Hopeful Stakes (G1), featuring a field of twelve 2-year-olds sprinting 7 furlongs on the main track. Dublin was sent off as the lukewarm 3-1 favorite, exiting a 3 1/4 length win to break his maiden last time out. In to challenge the son of Afleet Alex included 7-2 second choice Enumerate, exiting a close second place finish in the Sanford, and 9-2 third choice Backtalk, undefeated in 3 career starts including the Bashford Manor and the Sanford.

37-1 One Note Samba and 42-1 Flatter Than Me battled for the lead down the backstretch through fractions of 22.10 and 44.97, with 5-1 fourth choice Prince Rooney and 17-1 Westover Wildcat stalking them third and fourth respectively. Entering the stretch, the pacesetters tired, as Dublin, who stumbled at the start but was hustled into midpack, came out four wide for room and gained a short lead at the 3/16 pole. 8-1 Aspire, 10th early, put in a strong rally between horses late but was no match for Dublin who drew off to win by 2 lengths in 1:23.52. It was another 1 1/2 lengths back to 20-1 Aikenite third. 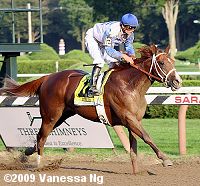 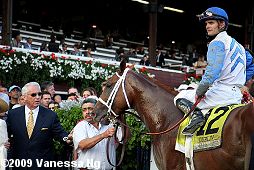 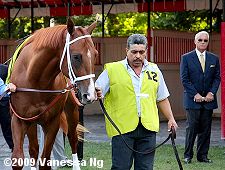 Left: Dublin in the winner's circle with trainer D. Wayne Lukas on the left.

Right: Trainer D. Wayne Lukas watches Dublin in the paddock before the race. Lukas said, "The first thing we're going to do is pack him in Styrofoam and I'll put my layaway down next to him. I expected him to run well. He had a good month up here since his maiden win. Jamie (Theriot) said he was green in the stretch, but that's the first time he's really knuckled down on him. We've never really asked him to lay it down in the morning. He stumbled badly leaving (the gate). He almost went to his knees. He has a long, rangy stride. He's got a lot of balance to him. He's pretty gifted. I feel like he's going to develop. This was my No. 1 pick in the sales. I still haven't lost my eye in that part. I like to play in the main arena - these 2-year-olds, when they turn 3, that's the name of the game. Bill Mack and Bob Baker are the reason this horse is here." 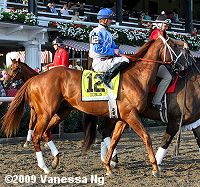 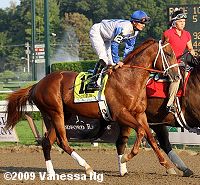 Left: Dublin heads out on the track.

Right: Dublin in the post parade. His jockey Jamie Theriot said, "I went into the race with confidence because he had broken his maiden with fashion. He stumbled badly at the break, but he recovered very quickly. He was a little green coming down the lane - if I hit him right-handed he'd duck left a little, if I hit him left-handed, he'd duck right - but he'll grow out of that. I think (more) distance won't be a problem for him. We will see a different horse when he goes two turns. My idea was to come to Saratoga and find myself a Derby horse. We think he's a good one." 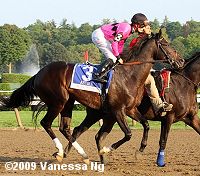 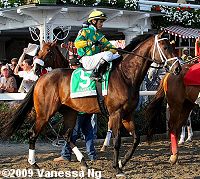 Left: Second place finisher Aspire in the post parade. His trainer Eddie Kenneally said, "He ran great. He was a little green but I know the longer he goes the better he will get. I knew this was a jump up in class for him but he ran great." His jockey Julien Leparoux added, "He was still a little green but he will learn a lot from this race. That was a big step up for him. He ran in a 6-horse field last time and now in a 12-horse field in a Grade 1 which was a huge difference. He broke sharply but he took himself back a little bit because he was next to a lot of other horses. It was a big step up for him today and I expect he will be better next time."

Right: Third place finisher Aikenite heads out on the track. His jockey Alan Garcia said, "He was a little slow in the beginning and then he was a little scared by the dirt hitting him. Just like Todd said, you have to keep riding, keep pushing him. The harder you ride, the better he is. He broke OK and I had a good trip. Todd said to sit on him and make one run and he did run at the end. He's a nice horse."


Immediately before the Hopeful, a field of 10 older fillies and mares contested the $100,000 Glens Falls Handicap (G3) at 1 3/8 miles over the inner turf course. Mushka, exiting a 7th place finish in the Diana and winless since an allowance race at Keeneland in April, was sent off as the 5-2 favorite over 3-1 second choice Tejida, fourth in the Diana after finishing a close second in the All Along. R.G. Dick Memorial winner Caprice and Donor Stakes winner Bubbly Jane went off at identical odds of 5-1 as the co-third choices on the toteboard. 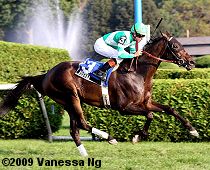 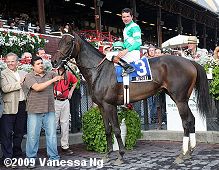 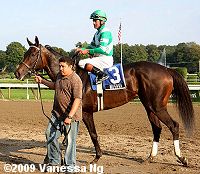 Left: Mushka in the winner's circle with trainer Bill Mott on the left. Mott said, "She ran well. It was a good set up and she was on the bridle and traveling really well. Kent said when she turned the corner, she did it all on her own and opened up." Asked about her loss last out in the Diana, Mott added, "The 1 1/8 miles is not a bad distance for her, but I don't think she likes soft ground. She has run sub-par races on soft ground."

Right: Mushka circles after the race. Her jockey Kent Desormeaux said, "She broke real smart and everything went according to plan after the break. The distance was fine for her. She was full of run. I can't do it without an eager mount; and my mount was eager. She cornered in hand, and I hadn't encouraged her to run yet. She started lengthening her stride, so she was telling me she wanted to go faster." 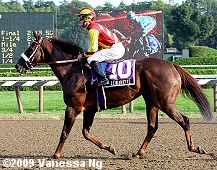 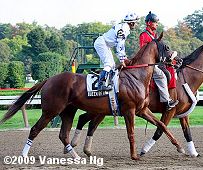 Left: Second place finisher Lemonette returns after the race. The 15-1 shot was outrun early under new jockey Julien Leparoux, circled 5 wide into the lane and finished fastest down the center of the course beaten 1 1/4 lengths. The Eric Reed trained daughter of Lemon Drop Kid improved her record to 3 wins, 9 seconds, and 3 thirds in 23 starts, earning $175,552 for owner Jerry Jamgotchian.

Right: Third place finisher Queen of Hearts in the post parade. The 24-1 shot saved ground around all three turns under regular rider Jose Espinoza while tracking the favorite in third early, then finished well while drifting out to hold third, nosed out at the line for second money. The James Jerkens trained daughter of Thunder Gulch improved her record to 2 wins, 1 second, and 2 thirds in 5 starts, earning $97,062 for owners Susan Moore and M and M Thoroughbred Partners.