The $1 million Whitney Stakes (G1), run at 1 1/8 miles over the main track, is the premier contest at Saratoga for older horses and is a Breeders' Cup Challenge "Win and You're In" race earning the winner automatic entry into the Classic (G1) at Keeneland on November 5. As is typical for early August at the Spa, it was sunny with temperatures in the high 80s but feeling like the mid 90's with the humidity.

After Stephen Foster (G2) runner-up Americanrevolution scratched, a short field of just 5 went to post with Pegasus World Cup (G1) winner Life is Good sent off as the 4-5 favorite off his win in the John A. Nerud (G2) after finishing fourth in the Dubai World Cup (G1). In to challenge him included 9-5 second choice Olympiad, winenr of 5 straight including the Alysheba (G2) and Stephen Foster, and 4-1 third choice Hot Rod Charlie, second in both the Dubai World Cup and Salvator Mile (G3). Due to the short field show wagering was not available. 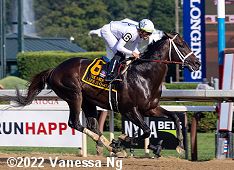 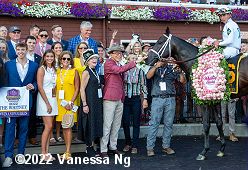 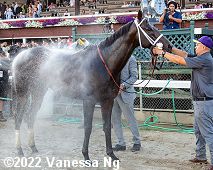 Left: Life Is Good in the winner's circle. Winning trainer Todd Pletcher said, "There are so many factors to worry about with heat, the humidity, the track's been playing pretty demanding, but during the race, it looked like he was always in control. I thought he was in good position. It looked like he kept finding more and I was happy to see him get there. When you feel like you're bringing over the best horse, you worry about everything. Today we got the rain, the deep track, the heat and humidity. All those things can be concerning, but he was able to overcome all of that and just show how brilliant he really is. To me it's the premier older horse race in the country outside of the Breeders' Cup Classic. So, it means a lot."

Right: Life Is Good gets hosed off after the race. Elliott Waldem, president of winning owner WinStar Farm said, "It felt like he was the best horse all along and he showed it today. It's real exciting, that's what we're here for. These kind of dreams and these kind of horses. To have [Triple Crown Champion] Justify and this horse three years later is just incredible." 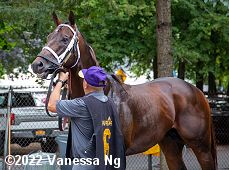 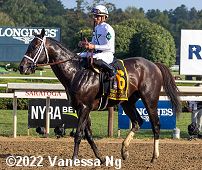 Left: Life Is Good in the paddock before the race. Winning jockey Irad Ortiz Jr. said, "He's a nice horse. He deserves all the credit. He does things easy. He might make things look easy but he was running since the three-quarter all the way to the wire. He was the speed of the race, honestly. He's fast out of the gate. He broke good and then I just let him do his thing. This means a lot. It's a great race to win. I'm happy for the connections and the horse, too. He stayed and just never quit. He was in control and the horse deserves all the credit. I just ride him and he was in the front the whole time."

Right: Life Is Good returns after the race. Ortiz added, "When we got to the three-quarter pole and along the backside he changed leads and he just took off. Two jumps. He was strong. After that, I didn't want to fight too much with him and he surprised me today. I just started to let him do his thing. It was a little early but I had just a little hold of him. I can't fight too much with him. I was clear [in the stretch]. I looked and came down a little bit. I know if he felt somebody that he would give me another run and more. I know he's coming back a little, the track is not that fast, so if he feels somebody he will fight. I know he will fight, so that is why I was looking." 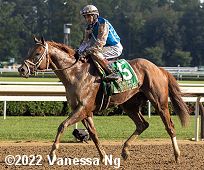 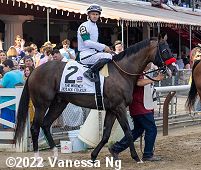 Left: Second place finisher Happy Saver returns after the race. Jockey John Velazquez said, "[Life Is Good] was two lengths in front of me, there was nothing I could do. Even if I claimed foul there was nothing they were going to do – he was clear. Obviously, he was really clear when he went in and I pulled mine out and that was it. We just switched positions, that's all it was. He was that clear when he went in that I went outside with no trouble at all. I thought he ran really well. From the three-sixteenths pole, I thought I had a really good chance but the other horse had another gear. When I put him out, he stayed the same pace and the other one had another gear, so he won."

Right: Third place finisher Hot Rod Charlie heads out to the track before the race. Co-owner Bill Strauss said, "The effort was there. He was moving well and he always tries. He just didn't get there today. I was surprised he didn't finish second. I don't know if the winner would have been beaten today. He came back quite tired. We've been training down at Keeneland and I think if you train over this surface, it gets them fitter than being at Keeneland. We've talked about using the Lukas Classic [October 1 at Churchill Downs] as a prep for the Breeders' Cup, but the horse will tell us. We'll see how he trains out of this." 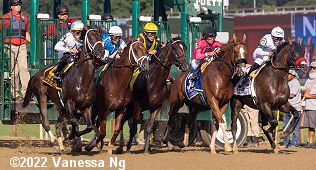 The horses break from the gate for the Whitney. Flavien Prat aboard Hot Rod Charlie (post 2) said, "I was pleased with my trip. He ran his race. Turning for home, I thought he was going to give me a good kick. He made a good run, but the winner never stopped. He broke well and I had myself where I wanted to be. He was travelling well. When I tipped him out, I thought he was going to go by." 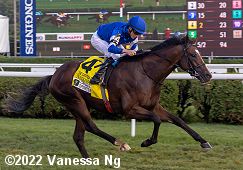 Immediately after the Whitney, the $1 million Caesars Saratoga Derby Invitational (G1) featured a field of 10 three-year-olds going 1 3/16 miles on the Mellon turf course. Nations Pride was sent off as the 2-1 favorite off his close second place finish in the Belmont Derby (G1) after disappointing 8th in the Epsom Derby (G1). In to challenge him included 3-1 second choice Annapolis, winner of the Manila Stakes at Belmont after finishing second in the Penn Mile (G2), and 4-1 third choice Stone Age, third in the Belmont Derby after finishing sixth in the Epsom Derby.

Jockey Julien Leparoux sent 6-1 fourth choice Classic Causeway to a 1 1/2 length lead while pressed by 40-1 Main Event and stalked by Nations Pride. Turning for home Nations Pride took over the lead. Kept to task by William Buick, Nations Pride edged clear to win by 1 3/4 lengths over late-running Annapolis in a hand-timed 1:54.72 It was a head back to pacesetter Classic Causeway third. Due to a teletimer malfunction, fractional times were not available and the final time was taken by hand.
Results Chart 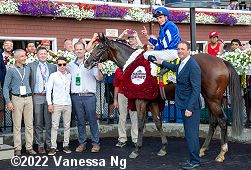 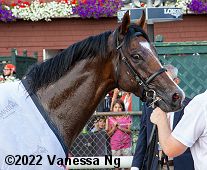 Left: Nations Pride in the winner's circle. Winning trainer Charlie Appleby said, "On the back of Belmont, they were a touch unlucky. He was a bit slow from the gate there and had that wider trip around. It was a little bit messy, but that was by the by. We came in today confident that if we could just get him to break a bit quicker and William [Buick] could get him up in behind the pace that we felt he was the right horse in the race and could go on and get the job done. It was a great ride by William."

Right: Nations Pride heads back to the barn after the race. Winning jockey William Buick said, "When he ran at Belmont last time, he really improved with experience. Obviously, it was the first time he ran in America and he took that experience into the race today and he's always been super straightforward. He was drawn 10 at Belmont and he jumped a step slow, which he did today as well. From the 4 gate, I managed to go to the inside, and the pace inside were going forward, too, so I managed to put him in there and get him into a good spot and he did the rest from then on really." 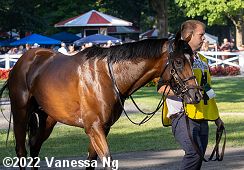 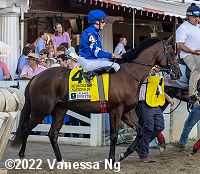 Left: Nations Pride in the paddock before the race. Buick added, "I expected them to go faster, but I also had in the back of my head that [Classic Causeway] would want to be doing the same again today. Once I saw that I knew Julien [Leparoux, aboard Classic Causeway] wasn't going to go too fast and I was happy where I was. I knew there were a couple closers in the race, but I knew my horse would stay well and the way that rain took the speed out of the track a little bit, so I was confident that my horse would stay well and hit the line well."

Right: Nations Pride heads out to the track. Appleby added, "I think we'll step him up to the mile and a half in the Jockey Club Derby (at Aqueduct on September 17). That's the most realistic aim now." 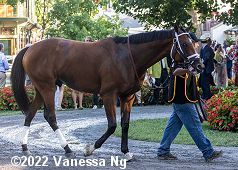 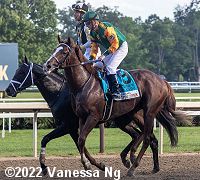 Left: Second place finisher Annapolis heads out for the paddock. Trainer Todd Pletcher said, "Irad said he was compromised by the soft ground. It had a little more cut to it than ideal for him. He likes hard ground. He kept trying at the end. It was just hard to accelerate on that ground. Certainly not [as soft as the turf] at Penn National, but still had some cut to it." Jockey Irad Ortiz Jr. added, "He ran a great race today."

Right: Third place finisher Classic Causeway returns after the race.  Jockey Julien Leparoux said, "It [the fractions] was very comfortable. He was happy on the lead and he ran his race. We just got beat today, that's it. No excuse. It didn't feel like he didn't handle it [wet turf]. Maybe it actually helped the competition more than anything. But he ran a great race." 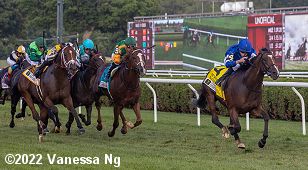 Down the stretch in the Saratoga Derby Invitational. Buick added, "I'm very privileged to be able to come over here and ride these horses. I've been riding a lot in the states on-and-off the last few years and I love it. The jockey colony over here is something really special. To be in that jocks' room today with all the superstars was fantastic and great to be part of it. I've never been to Saratoga before. This is my first ride. I've watched plenty of races here and last year we couldn't travel here, so when Charlie asked me to come and ride these horses, it was great to get that call"

Also on the card: The Test, Glens Falls, and Lure Stakes