The first of three Grade 1 stakes on Whitney day at Saratoga was the $500,000 Longines Test Stakes (G1) for 3-year-old fillies sprinting 7 furlongs on the main track. As is typical for early August at the Spa, it started sunny with temperatures in the high 80s but feeling like the mid 90's with the humidity, while a late shower came through later in the card downgrading the main track to "good" just in time for the Test Stakes. Matareya was sent off as the 3-10 favorite in the field of 7 off a 4 race win streak including the Eight Belles (G2) and Acorn Stakes (G1). In to challenge her included 13-2 second choice Hot Peppers, winner of the Victory RIde (G3), and 10-1 third choice November Rein, an allowance winner after finishing third in the Bouwerie Stakes.

Jockey Luis Saez sent Hot Peppers to the lead exiting the chute through fractions of 22.54 and 45.28 while pressed by 16-1 Wish You Well and stalked by November Rein. Turning for home Hot Peppers continued to lead through 3/4 in 1:10.43 but 17-1 Chi Town Lady, last early under Joel Rosario, came out 8 wide for room and rallied to win by 1 1/2 lengths in 1:23.87. It was a neck back to favorite Matareya third. There was a stewards' inquiry involving the top three finishers in the stretch but the result was allowed to stand. 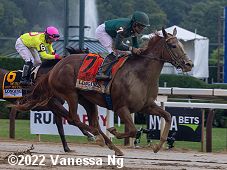 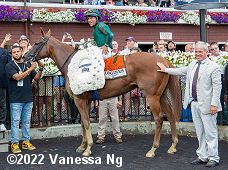 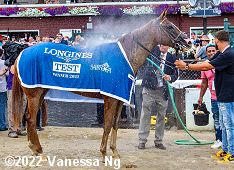 Left: Chi Town Lady in the winner's circle. Winning trainer Wesley Ward said, ""We got lucky. She had been training great and I was looking at this race after her last race in my mind and gave her a little time because she started coming from behind. I had Joel [Rosario] work her here a couple of times and she was just working phenomenal. I told the owners we were probably going to be running a 30-1 shot, but I wanted to take one shot from way back and do what she's been asking me to do, which is make a big charge and a big grind. We were hoping for a second or third – a graded placing – to see if the race fell apart, and here we are in the winner's circle."

Right: Chi Town Lady gets hosed off after the race. Winning jockey Joel Rosario said, "They went fast in front and she came with a run. That was an amazing race. It looked like they came out a little bit and I ran into them a little bit, but it looked like they were coming more from the inside. My horse was kind of on the wrong lead at that point and I was correcting her trying to keep her straight. She did great." 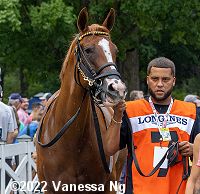 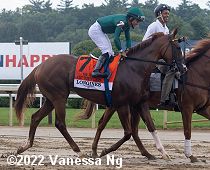 Left: Chi Town Lady enters the paddock. Ward added, "She's come a long ways. I just think that I had to kind of learn to listen to her to where she wanted to go easy the first part and come on late. This will be her running style from now on. We haven't thought that far (next start). We just are going to sit down in a couple weeks and figure out which direction we're going to go, but certainly the Breeders' Cup is going to come into play, especially this year being at our home track [Keeneland]. With her style, she'll sit way back and make one big run, so we'll see what happens."

Right: Chi Town Lady in the post parade. Ward said of the inquiry, "There was (concern) for me because I saw it happen and I thought I was coming down. They didn't throw the inquiry sign up at first, so I thought maybe we would skate through it, and sure enough it came up. I was a little worried until I actually saw the replay. I knew the stewards were going to rule in our favor, and they did." 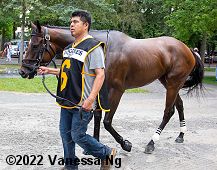 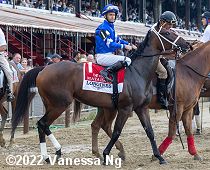 Left: Second place finisher Hot Peppers in the paddock. Jockey Luis Saez said, "I was riding my filly. I felt a little bump, not much, and I just tried to get in my lane. She broke full of run and that's how she is. I didn't want to take much from her and she ran pretty big. It was a big race." Trainer Rudy Rodriguez added, "She ran her race, tried hard and did what she could. Right now, we'll see how she comes out of the race and take it day by day. I'll talk to Mr. Dubb and we'll see where we are."

Right: Third place finisher and beaten favorite Matareya heads out to the track. Trainer Brad Cox said, "My first thought was I didn't think she was travelling that well down the backstretch. Flavien [Prat] thought the same, she wasn't really taking them up there. I thought he did a good thing at the three-eighths pole by dropping her down to the inside. It's probably a sign of her just not getting a hold of the track. No excuse really. I think she's a very good filly. Obviously she showed up and maybe not a favorable surface for her, and she still ran a good race. 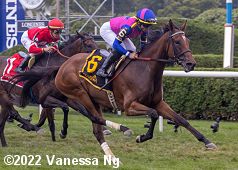 An hour before the Test, the $250,000 Glens Falls Stakes (G2) featured a field of 7 older fillies and mares going 1 1/2 miles around 3 turns of the inner turf course. Last year's winner and Breeders' Cup Filly and Mare Turf (G1) third place finisher War Like Goddess was sent off as the 2-5 favorite off a win in the Bewitch (G3). In to challenge her included 3-1 second choice Virginia Joy, fourth in the New York (G1) after winning the Sheepshead Bay (G2), and 11-1 third choice Petricor, fifth in the Big Dreyfus at Laurel. 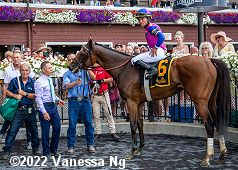 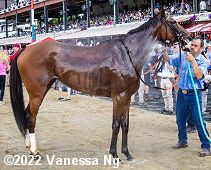 Left: War Like Goddess in the winner's circle after repeating in the Glens Falls Stakes. Winning trainer Bill Mott said, "She was on the bridle, but she wasn't running off. She was into the bridle pretty well. They were going slow, obviously a faster pace would make her look better at the end. She was still good enough that she was able to close into that pace. They were sitting on a bunch of them early, but I guess late she had a little more kick than the rest of them. You always worry about if they're going fast enough up front to give her a enough pace and you don't want them to have to wrestle with her to keep her back off the pace. Joel did a good job. He has good hands and the filly responded to him and when he asked her to go on, she was there for him."

Right: War Like Goddess gets hosed off after the race. Winning jockey Joel Rosario said, "She's a nice horse and easy to ride. The pace was slow, but the whole time I had confidence in her and when I turned her loose and wanted to go she went. She was running really nice for me and I just had to stay with her like that. She felt the confidence at that point and I just went with that. She's just amazing. Even before I rode her, when Julien [Leparoux] used to, I remember she just always had that kick at the end. I'm very happy with the ride." 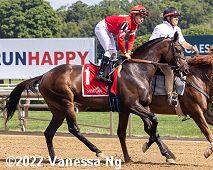 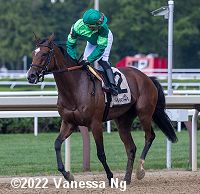 Left: Second place finisher Temple City Terror in the post parade. Jockey Tyler Gaffalione said, "It was a real gutsy performance today. I followed Irad [Ortiz, Jr. aboard Virginia Joy] and Joel [Rosario aboard War Like Goddess] most of the way around there, and when Joel started making his move, I tipped out behind him and just kind of followed him. The filly put in a big run, just second best today. You know, I've got to say I think she's improving. I think she is much more relaxed earlier in the race and she's finishing her runs off a little better now. If she continues in this direction, we'll be in a good spot [next time]." 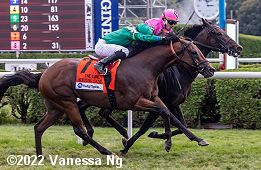 Jockey Irad Ortiz Jr. sent Somelikeithotbrown loose on the lead through fractions of 22.78, 46.05, and 1:10.66 while stalked by Safe Conduct and 13-2 fourth choice Sifting Sands. Turning for home Somelikeithotbrown tired from the hot pace allowing Shifting Sands to inherit the lead through 1 mile in 1:34.05 but 23-1 longest shot Dynadrive, last early under Eric Cancel, came through a narrow opening on the rail to get up by a head in 1:39.83. It was another 1 1/2 lengths back to late-running 10-1 Duke of Hazzard third, and a length more to favorite Public Sector fourth.
Results Chart 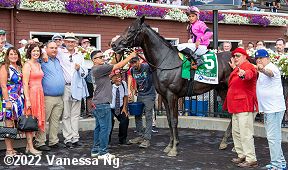 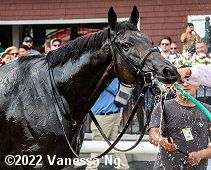 Left: Dynadrive in the winner's circle. Winning trainer Tom Morley said, "He was a horse that wanted to be tremendously aggressive in his morning training. We were trying to get him to slow everything down. He shipped up here five or six days ago. He's done everything right since then. That's not always the case, but today he was a much better horse in the paddock. He was very tough when I saddled him at Belmont, he pulled a shoe. I said to Eric [Cancel] at Belmont, 'It can only get better from here,' and it did because he won. But today, we learned a lot for the first time. He had no issues before the race."

Right: Dynadrive gets a drink after the race. Winning jockey Eric Cancel said, "There was a lot of speed in the race with [Somelikeithotbrown]. I just tried to get him to relax. I got him where I really wanted to be and everything just worked out very well. To be honest, I knew I had it. I had a lot of faith in my horse. He ran a huge race out of the layoff and he came 200% today, so I was expecting this performance from him. There wasn't too much room at the beginning, then it opened up a little and I went for it. [Manny Franco aboard Sifting Sands] tried to make it a little tight on me but my horse is brave and once I got him the spot, he was really comfortable and he just kept on going." 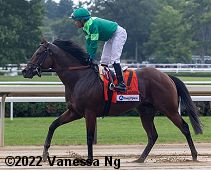 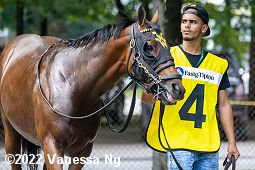 Left: Second place finisher Sifting Sands returns after the race. Jockey Manny Franco said, "He always runs well for me. I think he likes the course here too. He was giving me his all. [Dynadrive] got to the inside and caught me by surprise a little bit. But my horse was game."

Right: Third place finisher Duke of Hazzard in the paddock before the race. The Wesley Ward trainee improved his record to 5 wins, 5 seconds, and 7 thirds in 31 starts, earning $461,498 for owner Mrs. Fitriani Hay.

Also on the card: The Whitney and Saratoga Derby