The Grade 1 Whitney Handicap is the summer showcase for the best older horses on the east coast. In this year's edition, a field of eight went to post in the $750,000 event at 1 1/8 miles on the main track. Saint Liam was sent off as the 7-10 favorite, with the 2-horse entry of Sir Shackleton and Commentator the 3-1 second choice. A crowd of 32,287 set a non-Travers Day record for on-track handle at Saratoga Race Course on Saturday when they wagered $5,573,304.54 on a 10-race Whitney Day card that also featured the Grade 1 Test. The record topped the previous non-Travers Day standard of $5,338,929.48 set on Whitney Day last year.

When the gate opened, jockey Gary Stevens sent Commentator straight to the front right away, and he was loose on the lead for the backstretch trip through a quarter in 23.56, a half in 46.41, and 3/4 in 1:09.76. The field was strung out most of the way, with Commentator 5 1/2 lengths clear of Saint Liam at the 3/4 mile marker, and then it was another 10 back to Sir Shackleton in third. At the top of the stretch, jockey Edgar Prado asked Saint Liam for his rally, and the favorite closed the gap strongly through the lane to get within 1 1/2 lengths at the eighth pole. However, Commentator was able to hold him off in the final strides and win by a neck in a time of 1:48.33 over the fast main track. It was 9 lengths back to Sir Shackleton in third, and 3/4 more to 21-1 shot Swingforthefences in fourth.

Also on the card was the Grade 1 Test Stakes for the fillies. Check out the results and photos for that race here. 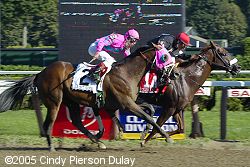 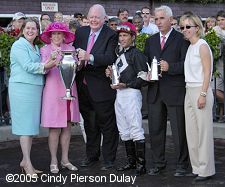 Mary Lou Whitney (in pink) presents the Whitney Handicap trophy. Winning trainer Nick Zito said, "I didn't know if he could go the distance. Commentator is an unusual horse. I was glad Edgar (Prado, on Saint Liam) gave us a little break. Edgar rode a hell of a race. He knew Commentator was the horse to beat. I think we'll wait for the Woodward (September 10 at Belmont Park). It's a Grade 1, straightaway mile and an eighth race. Then, we'll consider the Breeders' Cup (Classic, October 29)." 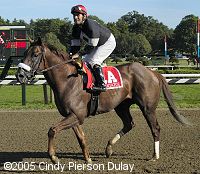 Commentator returns after the race. Winning jockey Gary Stevens said, "From the 3/8 pole, I was very happy after what had gone on earlier in the race. He was very manageable and cooperative. I turned into the stretch with a lot of horse, and he finished up nice. I'm so happy for Nick (Zito). He's going into the Hall of Fame on Monday, and people don't know that there is a lot of pressure involved in that. For him to win the Whitney, I'm more tickled for him than I am for myself." 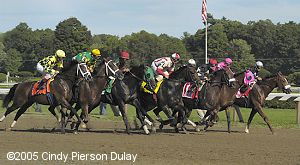 Just after the break with all the horses across the track. 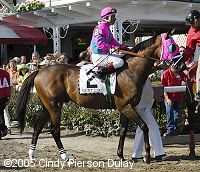 Second place finisher and beaten favorite Saint Liam in the post parade. His trainer Richard Dutrow Jr. said, "He ran well. I knew we could (get nine furlongs); I didn't know if Commentator could. I'm not going to complain about nothing. I'm proud of him. It's just a shame we couldn't win. Hopefully, we'll live to fight another day."

His jockey Edgar Prado said, "I'm happy with the way he ran. Coming around the turn, I wanted to get close instead of letting him be by himself. My horse caught another gear, and I thought I was going to catch him. He kept trying, but couldn't get it done. We lost to a really fast horse. Giving away the weight mad a real big difference." 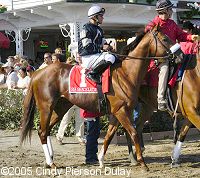 Third place finisher Sir Shackleton in the post parade. His jockey Javier Castellano said, "He finished well. I was just happy he could get piece of it."