The second feature on the Whitney card was the Grade 1 Test Stakes, a $250,000 event for 3-year-old fillies sprinting 7 furlongs on the main track. Owner Live Oak Plantation and trainer Nick Zito sent out a 2-horse entry consisting of In The Gold and Hide and Chic, favored in the betting at 6-5 over the Michael Tabor and Derrick Smith 2-horse entry of Maddalena. and Sense of Style, sent off at 2-1.

At the start, 9-2 shot Leave Me Alone broke well under jockey Kent Desormeaux and got to the rail, battling on the front end with Maddalena to her outside through a quarter in 22.42 and a half in 45.46. Turning for home, Leave Me Alone found another gear and took off on the field, stretching the lead to 5 lengths at the 1/8 pole and drawing away to an easy 7 3/4 win over Hide and Chic in 1:22.76. It was just 3/4 length back to In The Gold in third. Maddalena tired inside the final furlong and finished fifth.

Get the results and photos for the Whitney Handicap here. 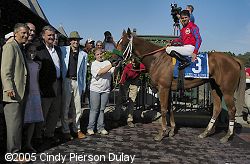 The happy connections in the winner's circle. Winning trainer Eric Kruljac, celebrating his first ever Saratoga and Grade 1 win, said, "She will rate, but I thought we were very dominant with the speed that she has. She was just a professional. She's just getting better and better. Kent (Desormeaux) gave her a perfect ride. We thought there might be some `rabbits' sent, but he was aware of that. She just got out there and relaxed so nicely for him. At the quarter-pole, she put them away. This is the first horse I ever saddled at Saratoga. I kind of doubt we're going in the Ballerina. If it was a full month, I would consider it." 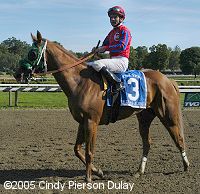 Leave Me Alone and jockey Kent Desormeaux return after winning the Test. Desormeaux said, "This was a very easy job for me; all I had to do was keep her between the fences. Leave Me Alone was left alone on the lead. She established it, because she is very fast and quick away from the gate. I was able to sit quietly on her until inside the quarter-pole, and then I asked her to stretch her legs and reach for the wire and she did that tenaciously. She dropped a few inches and you can tell that she really lengthened her stride. I encouraged her to give it her best - and you can see the results." 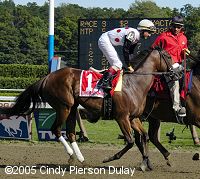 Second place finisher Hide and Chic, part of the favored entry from trainer Nick Zito and Live Oak Plantation, in the post parade. Nick Zito, said, "I thought both of my fillies ran well, but no one was going to catch the winner. Gary (Stevens) told me (In the Gold) hit the gate at the start. Obviously, that didn't bother her that much because she was able to make a solid run around the far turn. As for Hide and Chic, she was beaten again by the winner."

Her jockey Jerry Bailey said, "She ran great. She stalked the hot pace. I thought I could run her down, and just when I thought that she willingly opened up on me." 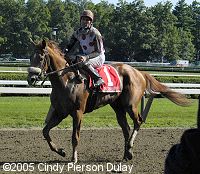 Third place finisher Hide and Chic, the other part of the favored entry from trainer Nick Zito and Live Oak Plantation, returns after the race. Her jockey Gary Stevens said, "She hit the side of the gate coming out. She came with a great run." 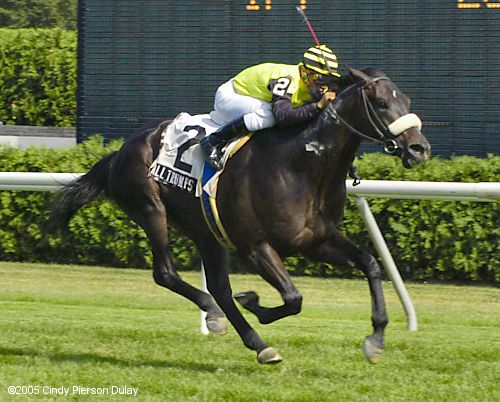 The first stakes on the afternoon was the $65,000 Sir Cat, for non-winners of a turf stakes. A field of 9 faced the starter in this event at a mile on the inner turf course. 11-1 shot All Trumps stalked the pace three-wide early on, rallied around the turn, got the lead with a furlong to go, and easily held off the late charge of 2-1 favorite Classic Campaign to win by a length in 1:34.43 over the firm course.
Results Chart from Equibase. 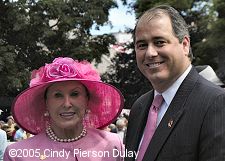 Saratoga socialite Mary Lou Whitney and her husband John Hendrickson in the paddock. The Whitney Handicap is named for her family.