The co-feature race on Saturday at Saratoga was the $350,000 Alfred G. Vanderbilt Handicap (G1), one of the premier races for older sprinters on the east coast. A field of 6 went to post in this 6 furlong main track event under partly cloudy skies and temperatures in the high 70's. Jackie's Warrior was sent off as the 1-4 favorite off a 3-race win streak including the Count Fleet Sprint (G3) at Oaklawn, Churchill Downs Stakes (G1) on the Kentucky Derby undercard, and the True North Stakes (G2) on the Belmont undercard. In to challenge him included 5-1 second choice Ny Traffic, winner of the Affirmed Success at Belmont and the Chocolate Town at Penn National, and 8-1 third choice Willy Boi off his win in the Smile Sprint (G3) at Gulfstream.

Jockey Javier Castellano sent 22-1 Doc Amster to the lead out of the chute through an opening quarter of 22.39 before Jackie's Warrior moved up to take over approaching the turn through a half in 45.17, chased by Doc Amster and stalked by Willy Boi. Into the lane jockey Joel Rosario asked Jackie's Warrior to pull away and he obliged, opening up a 4 1/2 length advantage midstretch through 5f in 56.99. 22-1 Kneedeepinthesnow, last early, put in a strong late rally 6 wide to no avail as Jackie's Warrior cruised to a 2 length win in 1:09.74. It was another 3 lengths back to Willy Boi third.

The Jim Dandy Stakes also on the card 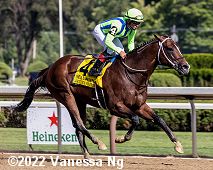 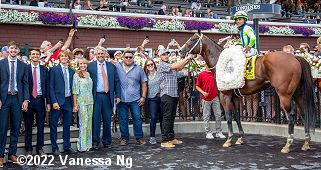 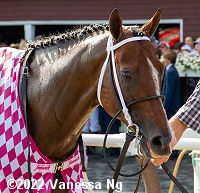 Left: Jackie's Warrior in the winner's circle. Winning trainer Steve Asmussen said, "I was made aware that he's the only horse ever to win a Grade 1 three years in a row at Saratoga. The great racehorses that have won here and he's the only one to do that. I just can't say how much I have wanted that for him and am proud of it and Jackie's Warrior has done it. He's the whole package. He just has a tremendous amount of ability and confidence in himself. A game horse. [I get] all kinds of jitters. Beyond belief. I wanted this more than you're supposed to want things. Immortality, a record like that. We owe everything we have to these horses and when one comes along as special as him, you go through the crowd and see all the fans he has. He's the only horse to have ever done that and I'm so proud of him and the whole team. You can't imagine how much this horse means to the barn."

Right: Jackie's Warrior heads back to the barn after the race. 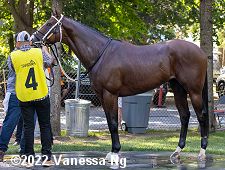 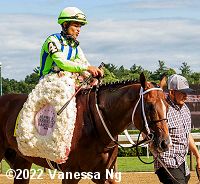 Left: Jackie's Warrior in the paddock before the race.

Right: Jackie's Warrior circles with his flowers. Winning jockey Joel Rosario said, "[Doc Amster] wanted the lead for a little bit, I took [Jackie's Warrior] outside and it looked like he didn't mind that. [We] got into the turn and he wanted to go and do his thing and he just loves to run. He felt comfortable, so I just let him be and see where he was happy. He's always there for me. I know when I ask him to go, he's there for me. I try to work him the way he wants. I came out of there, but the outside horse [Doc Amster] had speed. I thought maybe if I go right away, I'll go, but I decided then to be outside the speed horse and let him work. He's a really good and special horse." 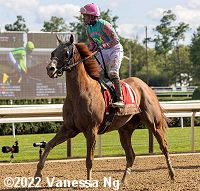 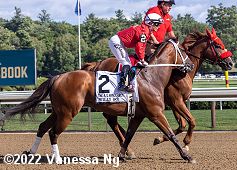 Left: Second place finisher Kneedeepinsnow returns after the race. Trainer Matt Shirer said, "It was pretty cool. I didn't expect him to be that far back. I don't know that he really broke that slow, but it just kind of took him a little bit of time to get into stride. Once he did at about the three-eighths, he started making a move. I was really happy with the way he ran. I mean, there was no beating Jackie's Warrior, but at least he closed and came running, and he looked good on the gallop out. Maybe we'll look for something a little longer. I've always kind of thought he was possibly a one-turn mile type horse, but he's also got speed, so that's why we shortened up today. We'll see."

On to the Jim Dandy Stakes also on the card