There were two graded stakes contested on Saturday at Saratoga, under partly cloudy skies and temperatures in the high 70s. The main track was fast and both turf courses firm.

The $600,000 Jim Dandy Stakes (G2) is the major local prep for the Travers (G1) to be run 4 weeks later. After Peter Pan (G3) fourth place finisher Western River scratched, a short field of 4 three-year-olds contested this 1 1/8 mile main track test, with Louisiana Derby (G2) winner Epicenter sent off as the 11-10 favorite off close second place finishes in both the Kentucky Derby (G1) and Preakness Stakes (G1). In to challenge him were 9-5 second choice Early Voting, winner of the Preakness, 5-2 third choice Zandon, third in the Derby after winning the Blue Grass (G1), and 17-2 longest shot Tawny Port.

Jockey Jose Ortiz sent Early Voting to the lead first time by and he set fractions of 24.22, 48.28, and 1:12.26 while pressed by Zandon and stalked by Tawny Port with Epicenter trailing. Turning for home jockey Joel Rosario sent Epicenter 5 wide to sweep to the front through 1 mile in 1:36.55. Kept to task by Rosario, Epicenter pulled away to win by 1 1/2 lengths over Zandon in 1:48.99. It was another 1/2 length to Tawny Port third, and 1 3/4 more to pacesetter Early Voting last.

The Vanderbilt Handicap also on the card 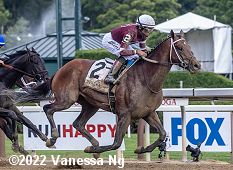 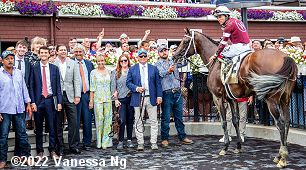 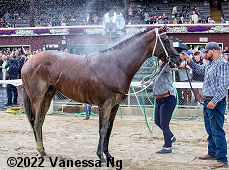 Left: Epicenter in the winner's circle. Winning trainer Steve Asmussen said, "It's extremely rewarding off two tough races to bring him back in the winner's circle where we think he belongs. [In] a four-horse field, it's always a lot of mobility. I was very happy with the solid, steady pace – I think that 48 and one, 12 for every eighth of a mile is what we're targeting. What I loved about it is the fact that [there is] another eighth in the Travers. It was his first race ever over Saratoga and we know what's on the menu next. We want to be as ready as we possibly can for it. I didn't expect it to offer him any problems whatsoever, but it's a great relief for him to run his race over this track. [Travers] is definitely a goal and we think Epicenter has a wonderful opportunity to do it.""

Right: Epicenter gets hosed off after the race. Winning jockey Joel Rosario said, "He broke well, but took a little bit of time. It looked like there were a couple of the horses that wanted to go and get a position, so I just let him be where he was and happy." 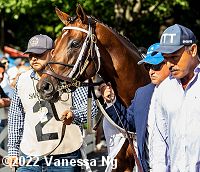 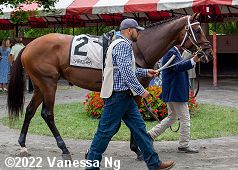 Left: Epicenter enters the paddock. Asmussen added, "He was very comfortable and with the scratch of [Western River], that put him in the one hole and Joel made a decision early not to try to be squeezed up in there. Once he eased him out of that spot, Epicenter was carrying Joel very comfortably the whole way down the backside. I was a little concerned how far back he was, but they threw up the middle fraction, they stayed at 12 and didn't back it up in his face. He had a shot from there. When he eased him out at the head of the lane, he was travelling really pretty."

Right: Epicenter in the paddock. Rosario added, "Seeing the race he put in today, [sitting] behind and waiting for the right time to go on and he did. We broke and got to the rail, probably not exactly what he wanted but the race played that way and got inside there for a little while. He ran his race but sometimes [it takes] a lot to go that way. He looked relaxed and did everything when I asked, so we look forward for [the Travers]." 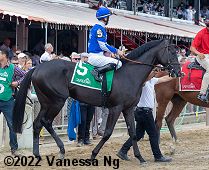 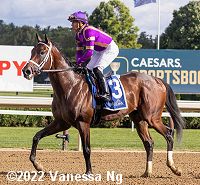 Left: Second place finisher Zandon heads out for the post parade. Trainer Chad Brown said, "He was a little closer than he probably wants to run. I don't think Flavien [Prat] had any other option. I thought he rode the horse fine. Hopefully, in a bigger field, I can get the horse back. He did a little better running in the Blue Grass with a different strategy. Hats off to the winner - he didn't break that well and he still circled the field and won nicely. He was the best horse today." 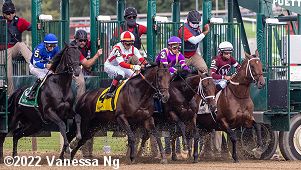 The horses break from the gate for the Jim Dandy Stakes. Jockey Flavien Prat aboard Zandon said, "I was pleased with the way things were going. He ran his race. Obviously, the main goal is the Travers, but we'll see how he comes out of the race. I didn't have that type of race in my mind. I thought there would be a bit more battle between Early Voting and Epicenter. Unfortunately, it looked like Epicenter didn't jump well so I broke well and got myself there. It's probably not where he wants to be, but it was the natural thing."

On to the Vanderbilt Handicap also on the card