The feature race on the second last weekend of the 2022 Woodbine meeting was the $150,000 Valedictory Stakes (G3), a 1 1/2 mile trip for older horses going around 3 turns of the Tapeta main track. Traditionally this race, the last graded stakes in Canada for the year, is run on Woodbine's closing day but was scheduled a week earlier this season, with closing day set for next Sunday. Conditions were typical for early December at the Toronto oval, with clear skies and a race time temperature of 0.2 C (32.4 F) accompanied by 28 km/h (17 MPH) wind gusts. A field of 12 made final entry with Who's the Star sent off as the 8-5 favorite off wins in the Durham Cup (G3) and Autumn Stakes (G2). In to challenge him included 7-2 second choice Novo Sol, third in both the Presque Isle Downs Mile and Autumn Stakes, and 15-4 third choice Megayacht, making his stakes debut off an allowance win last out.

Jockey Rafael Hernandez sent 42-1 Wentru to an uncontested lead first time by through fractions of 24.85, 49.47, 1:15.49, 1:41.34, and 2:05.75 while pressed by 15-2 fourth choice Angelou and stalked by 16-1 British Royalty. Turning for home, Wentru had a 3 length lead which was rapidly diminishing. Favorite Who's the Star, 10th early under Emma-Jayne Wilson, came out 7 wide for room and rallied to catch Wentru to dead-heat for win in the final strides in 2:31.10. It was just a neck back to fast-closing 29-1 English Conqueror third. The same two riders, Emma-Jayne Wilson and Rafael Hernandez, were involved in the other graded stakes dead heat win at Woodbine this year, in the Nassau Stakes (G2) on July 2. 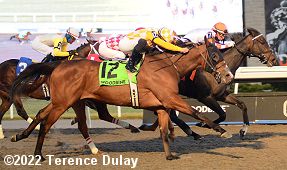 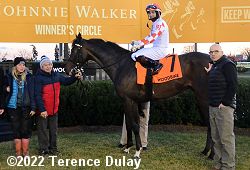 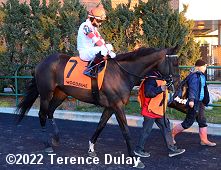 Left: Wentru in the winner's circle. Winning jockey Rafael Hernandez said, "He relaxed. I wanted to get him more relaxed, but he was on the bridle all the way. It helped that no one went head-to-head with me. I was able to get the jump before everybody."

Right: Wentru heads out to the track before the race. Hernandez added, "I knew we were slowing, and if I can get the jump, I know he was going to do his job. We got the dead-heat, but he ran unbelievable." 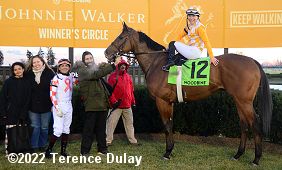 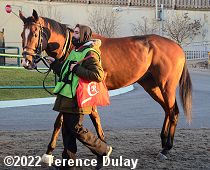 Left: Who's the Star. Winning jockey Emma-Jayne Wilson said, "It was a different kind of pace setup for this race, a mile and a half you get a lot more horses coming from well off it. I thought there would be a lot more pace up front. I never got over to the rail and at the 3 1/2-furlong marker, I needed to get going. There was a lot of horses in the way. There were a lot of horses in the race. He's got that wicked kick, so I swung him to the outside and got him going as fast as I could."

Right: Who's the Star walks over before the race. Wilson added, "This is what we're here for, to get on fast horses, and he's a really fast horse. He's been wonderful to partner with. He absolutely, 100 percent deserves the congratulations at the end of the year, the (Sovereign Award for champion older horse)." 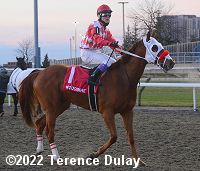 Right: The entire field first time by in the Valedictory.