There were four graded stakes at Woodbine on Saturday, headlined by the $200,000 Highlander Stakes (G2) for older horses sprinting 6 furlongs on the main E.P. Taylor turf course. Conditions were excellent in Southern Ontario on the first Saturday in July, with partly cloudy skies and a post time temperature of 29C (84F), with the turf course rated firm (GoingStick 11.1). Voodoo Zip was sent off as the 2-1 favorite in the field of 11, making his stakes debut off an allowance win at Belmont on May 29. In to challenge him included 9-2 second choice and last year's winner Silent Poet off his fifth place finish in the Jacques Cartier (G3), and 5-1 third choice Arzak, off wins in the Thorncliffe and the Jacques Cartier.

Jockey David Moran sent 13-1 Chuck Willis to the front down the backstretch and around the turn through fractions of 21.84 and 44.25 while pressed by 21-1 Into the Sunrise and stalked by 58-1 longest shot Elektronic and Silent Poet. Turning for home, Arzak, 8th early under Kazushi Kimura, came out 5 wide and swept to the front through 5f in 55.77. 11-2 fourth choice Bound for Nowhere, 6th early under Pablo Morales, was blocked at the top of the lane but came out for room at the 3/16 and rallied to win by a length in 1:08.01. It was a neck back to 35-1 White Flag third, while favorite Voodoo Zip checked in fifth beaten 2 1/4 lengths. 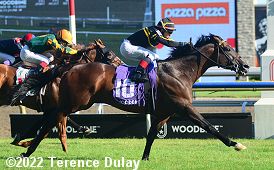 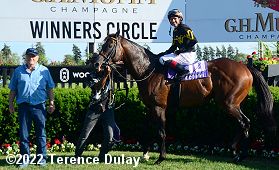 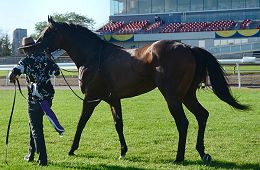 Left: Bound for Nowhere in the winner's circle. Winning jockey Pedro Morales said, "For a second, I thought I might be a little closer, but it worked out perfectly. A lot of horses came out together head and head and I was able to drop in and save a little bit of ground. He was very powerful all the way around there. I was sitting on a ton of horse. I was following a couple that I thought would carry me, but it seemed like everybody sort of stayed together. I was getting a little worried there but I'm glad I was able to work out a trip. When I put him in the clear, and he felt a little bit of room, he just took off."

Right: Bound for Nowhere heads back to the barn after the race. 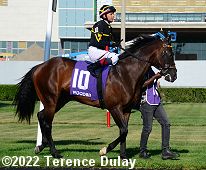 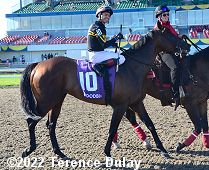 Left: Bound for Nowhere in the paddock before the race. Morales added, "If [trainer] Wesley Ward wants you to come to Woodbine, I'm going to come to Woodbine. I had no idea what horse it was, of course for my surprise, for a great surprise, I looked at the horse and I'm like, ‘Well, you’re put on an awesome horse.’ I was really excited to be here."

Right: Bound for Nowhere returns after the race. 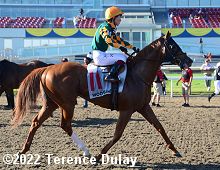 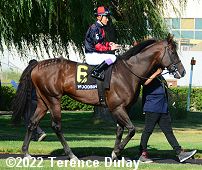 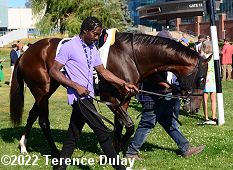 Fifth place finisher and beaten favorite Voodoo Zip in the paddock. The Christophe Clement trainee has a record of 4 wins, 6 seconds, and 3 thirds in 15 starts, earning $273,495 for owner West Point Thoroughbreds.

The $175,000 Nassau Stakes (G2) featured a field of 11 older fillies and mares going 1 mile around one turn of the E.P. Taylor turf course. Lady Speightspeare was sent off as the lukewarm 11-4 favorite, winless since the Bessarabian (G2) in November and fourth in the Distaff Turf Mile (G2) at Churchill Downs last out. In to challenge her included 3-1 second choice Our Flash Drive, second in the Beaugay (G3) at Belmont, and 7-2 third choice Crystal Cliffs, second in the Gallorette (G3) at Pimlico. 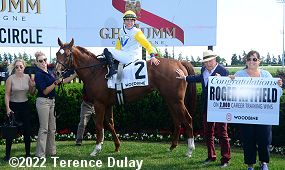 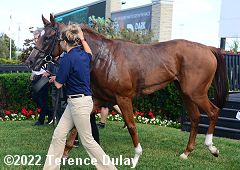 Left: Lady Speightspeare in the winner's circle. Winning jockey Emma-Jayne Wilson said, "Leave it to Mr. Roger Attfield, dual Hall of Famer, to have his 2,000th victory have an epic story behind it. He's legendary, and you know this filly is pretty special. She's tries her guts out all winter, to come back home. I said to Roger, ‘She looks happy to be home.’ And he said, ‘Yes, she does.’ She ran a gangbuster of a race. She fought tooth and nail when Patrick [Husbands aboard Our Flash Drive] went by us on the outside, fought tooth and nail to get back in front of them, and then fought off a challenger to the best of her ability and still secure a win."

Right: Lady Speightspeare heads back to the barn. This win was Hall of Fame trainer Roger Attfield's 2000th. Attfield said, "It's great, isn't it? I've never really thought too much about it until just recently when it's been so much written about it. I don't know where it works out on the amount of runners I've had, but you know, lots of people have won 2,000 races, but most of them run a lot of horses too. So, I'm very proud of it. And you know, it's been it's been a good travel. She's an interesting filly to train and she was unlucky this winter. Churchill was a disaster with that turf course. It's funny really because the jockey that rode her came back and said, you know, she wasn't having it with the turf course, the turf course was too loose, and then it turned out that it wasn't really ready to run." 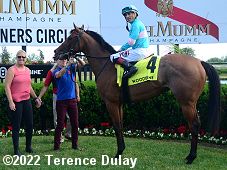 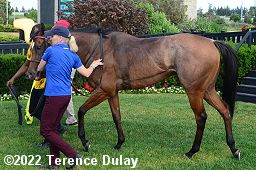 Left: Crystal Cliffs in the winner's circle. Winning jockey Rafael Hernandez said, "When I saw Roger over there, I said I cannot let him go too easy making the 2,000. I had to make it harder. So that's why we had to have the dead heat. It was good trip. It was a good pace up in front. Changing gears down the lane, she stuck every step, every step she did it better and better."

Right: Crystal Cliffs heads back to the barn after the race. The Graham Motion trainee improved her record to 4 wins, 3 seconds, and 2 thirds in 9 starts, earning $235,666 for owners Michael Dubb, Madaket Stables, and Wonder Stables. 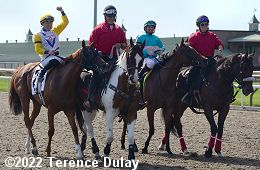 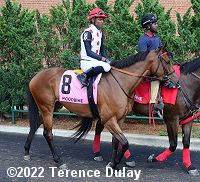 Left: Lady Speightspeare and Crystal Cliffs return together after the race.

Right: Third place finisher Our Flash Drive heads out to the track before the race. The Mark Casse trainee improved her record to 3 wins, 2 seconds, and 1 third in 10 starts, earning $265,520 for owner-breeder Live Oak Plantation.

The $150,000 Marine Stakes (G3) features three-year-olds going 1 1/16 miles on the Tapeta main track. This is considered a prep for the Queen's Plate however as a graded stake it is not restricted to Canadian-breds. Ironstone was sent off as the 11-4 favorite in the field of 8 off third place finishes in the Woodstock and the Queenston Stakes. In to challenge him included 4-1 second choice Rondure, second in the Queenston, and 9-2 third choice Mannix off an allowance win after finishing 6th in the Cutler Bay at Gulfstream.

Jockey Ademar Santos sent Ironstone to the lead first time by through fractions of 24.59, 49.06, and 1:12.74 while pressed by Rondure and stalked by Mannix and 11-1 Allegorical. Turning for home, jockey Rafael Hernandez asked Rondure to challenge and he easily took over the lead through 1 mile in 1:37.19. Kept to task by Hernandez, Rondure drew off late to win by 5 1/2 lengths over late-running 5-1 fourth choice Duke of Love in 1:43.57. It was a neck back to favorite Ironstone third. 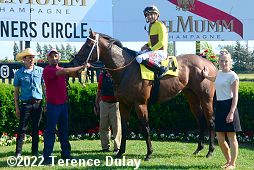 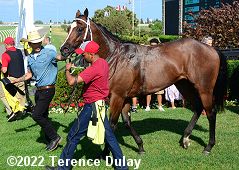 Left: Rondure in the winner's circle. He is Ontario-bred and nominated to the Queen's Plate. Winning trainer Katerina Vassilieva said, "I was worried about the short timeline between the Queenston and this race. There were a few question marks there. But, boy, it didn't seem like a factor at all today. I just told [Rafael Hernandez] to save as much ground as he could and come from behind. I wasn't sure where exactly he was going to find himself because in the first race, he was more forwardly placed than the last race in the Queenston. So, I just left that up to Rafi. I just wanted him to stay out of trouble and get it as clean of a trip as he could."

Right: Rondure returns to the barn after the race. Vassilieva, asked about the Plate added, "Excited, of course. But business as usual when it comes to the horse. I'm just going to do what I always do try to take the best care as I can of the horse, do right by him, and hopefully we get to the Plate and get to have some fun." 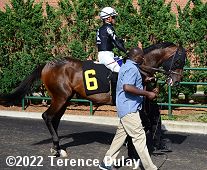 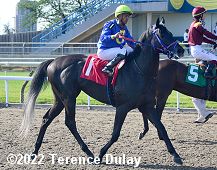 Left: Second place finisher Duke of Love heads out to the track before the race. the Josie Carroll trainee improved his record to 2 wins, 1 second, and 0 thirds in 5 starts, earning $121,850 for owner MyRacehorse.

The horses break from the gate for the Marine Stakes.

Kicking off the Saturday stakes quartet, the $150,000 Selene Stakes (G3) featured a field of 7 three-year-old fillies going 1 1/16 miles on the Tapeta. Bourbonette Oaks runner-up Catiche was sent off as the 11-10 favorite over 4-1 second choice Mrs. Barbara, second in the Ruling Angel, and 9-2 third choice Pioneer's Edge, second in the Fury Stakes. 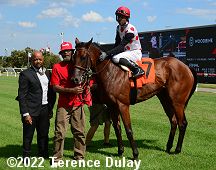 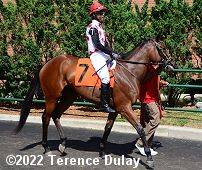 Left: Souper Hoity Toity in the winner's circle. Winning jockey Patrick Husbands said, "Once we left the gate, I could see the speed horse [Catiche] missed the break, and no one wanted the lead. My horse was a little bit rank to me. I tried to get across, and then everybody was rushing in. Everybody did the same as me. I turned my horse loose, so we had a fight for position in the first turn. I tried not to let Emma [Wilson] get things the way she was going. My filly was going so easy down the back, and as I went up the sixteenth and the half, towards Emma, she went on and I sat and sat, then chased her down."

Right: Souper Hoity Toity heads out to the track before the race. 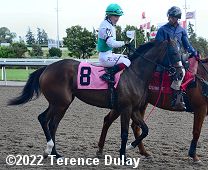 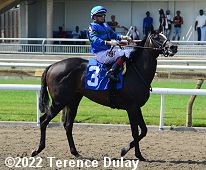 The horses break from the gate for the Selene Stakes.