The $1 million Travers Stakes (G1) is the highlight of the Saratoga meeting. The 143rd edition of the "Midsummer Derby" features the best 3-year-olds of the east going 1 1/4 miles over the historic oval in Saratoga Springs. 46,528 fans were on hand under sunny skies and temperatures in the mid-80's. Jim Dandy Stakes (G2) winner Alpha was sent off as the 5-2 favorite in the field of 11. In to challenge him included 3-1 second choice Nonios, second in both the Haskell (G1) and the Swaps (G2), and 5-1 third choice Neck 'n Neck, second in the Jim Dandy after winning the Matt Winn Stakes (G3).

Jockey Irad Ortiz Jr. sent 52-1 longest shot Speightscity to the lead first time by and he set fractions of 23.51, 48.06, and 1:12.62 while pressed by 23-1 Stealcase, with favorite Alpha stalking the pacesetters another 1 1/2 lengths back in third. Entering the stretch, 33-1 Golden Ticket, who sat fourth early, came through on the rail to gain a short lead over Alpha through 1 mile in 1:37.25. The pair battled through the final furlong and hit the line together in 2:02.74 over the fast main track. The photo finish determined that the pair dead-heated for the win, the first such result in the Travers since 1874. 32-1 Fast Falcon, last early, closed with a strong late rally to finish just a neck back of the winners.

With the dead heat, they had to paint two lawn jockeys for the paddock and two canoes for the infield pond. You can take a look at them here. 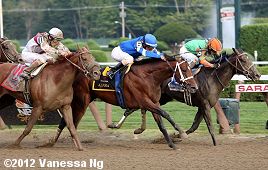 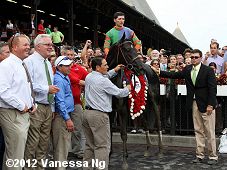 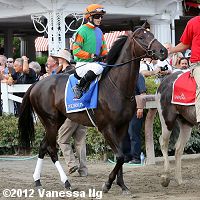 Left: Golden Ticket in the winner's circle. Trainer Ken McPeek said, "I thought we were beat at first, then I thought we won. I couldn't tell. I'm thrilled we finished in a dead heat. It couldn't work out better for the two of us. Kiaran is a great guy. We all work our tail off. It would have been a heartbreaker for either one of us to lose. (Golden Ticket) had been training unbelievable. We had been training him for the mile and a quarter distance. David nailed it. He cut him loose to the tee. He couldn't have done a better job."

Right: Golden Ticket heads out for the post parade. Winning jockey David Cohen said, "The horse ran great. We had two options; take the lead if they gave it to us, or try to sit back and find the pocket. If the rail came available great, or if we had to come out, just try to save our run until the very end. Wins like that you're not even looking at the wire; you're just trying to stay focused and keep riding hard. On the gallop-out, Ramon and I spoke to each other and neither one of us knew if we won. Words can't explain how this feels. Ramon and I took the dead heat in a great victory." 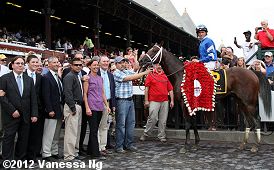 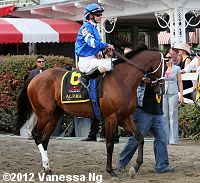 Left: Alpha in the winner's circle. Winning trainer Kiaran McLaughlin said, "At the wire, it was too close to call. I said, 'We'll take a dead-heat.' We thought he would run great, and he did. Kenny's horse ran very well also. It's a dead-heat, but it goes in the 'W' column. It doesn't happen very often in a Grade 1, $1 million race, but we're all happy it happened today for two guys from Lexington. We're happy to win a Grade 1 with this horse. I'm wondering who gets the canoe, how they're going to paint the canoe. At the 1/16 pole, I thought we were second-best. I didn't think we were going to get there. Then, at the last lunge or two, I thought we got there. The photo indicated a tie, and I said, 'We'll take it.'

Right: Alpha heads out to the track before the race. Jockey Ramon Dominguez said, "I was, throughout the whole race, three wide. Given that the other two horses were dueling for the lead, I really didn't want to take my chances tucking behind them. For a little while, I tucked behind (Stealcase), but I always kept in mind (Neck 'n Neck and Nonios) would be coming on the outside. So I kept my options open, keeping him on the outside. David rode a great race and got through on the rail. I really think that made a difference for him to become a winner. But either way, I'm very proud of my horse. Inside the 1/16 pole, it looked like (Alpha) lost because (Golden Ticket) had some separation, and he just kept coming." 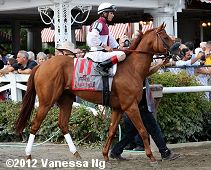 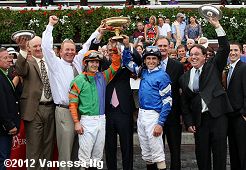 Left: Both sets of connections celebrate in the winner's circle. Ken Schlenker, co-owner of Golden Ticket said, "He wouldn't have been in the race if we didn't think he had a shot.  The way he's been working, the bullet works (3 consecutive bullet workouts at Saratoga).  Kenny said he was outworking Atigun. We kind of felt like it was meant to be."

Right: Third place finisher Fast Falcon heads out to the track before the race. Jockey Junior Alvarado said, "I tried to chase Street Life a little bit. All of a sudden by the three-eighths pole [Street Life] just stopped in front of me when I thought he was going to start to kick up. So, I had to move up, check a little bit and move outside. He started to pick it up again, but I'm sure that's what cost me the race." Trainer Nick Zito added, "That wasn't bad. I think if we don't have the outside post, he's right there."

The sprinting counterpart to the Travers is the $500,000 Foxwoods King's Bishop Stakes (G1) for 3-year-olds going 7 furlongs on the main track. Currency Swap was sent off as the 2-1 favorite in the field of 10, winner of the Amsterdam (G2) after finishing second in the Woody Stephens (G2). In to challenge him included 5-2 second choice Trinniberg, winner of the Woody Stephens but second in the Carry Back (G3) last out, and 7-1 third choice Ever So Lucky, third in the Curlin Stakes.

Jockey Willie Martinez sent Trinniberg to the lead exiting the chute and he set fractions of 22.28 and 45.13 while stalked by 8-1 Doctor Chit and favorite Currency Swap. Entering the stretch, Doctor Chit gained a short lead through 3/4 in 1:09.24, but the pace set the race up for the closers. 11-1 Willy Beamin, 8th early, closed four wide to get the 1/2 length win over 14-1 Fort Loudon in 1:22.02. It was just a nose back to 11-1 Unbridled's Note, while Currency Swap checked in sixth. 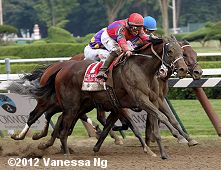 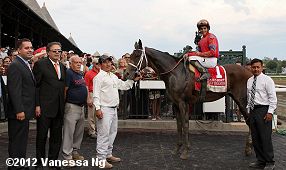 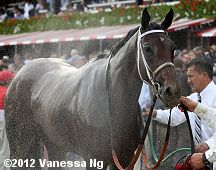 Left: Willy Beamin in the winner's circle. Winning owner James Riccio said, "Unbelievable. He started getting good, good, good. The other day he had a lot left in the tank, and he didn't even really ask him to run. (Rick, trainer) Dutrow is great at that. They run better the second time. Rick is at Aqueduct. He has a lot of other horses he's working. This is the best race I've ever won, and to be at Saratoga in a Grade 1 with a claimer, I never dreamed of this."

Right: Willy Beamin gets hosed off after the race. 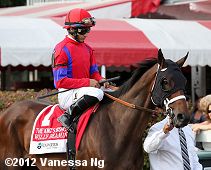 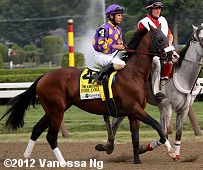 Left: Willy Beamin heads out to the track before the race.

Right: Second place finisher Fort Loudon in the post parade. Trainer Nick Zito said, "He tried his heart out. It's hard to figure out this business. (Willy Beamin) ran 3 days ago. What can you do? That's the way it goes. There's one thing about racing – you can never figure it out. I'm just happy my horse ran well. I thought we had it won. I was waiting for the wire." Jockey Junior Alvarado added, "He has the tendency to be lazy in the race, but he picked up the bridle really good. I had my chance to go outside with him. We waited in our position until we turned for home. Turning for home, you have to ride him hard. He won't give you anything unless you get into him. We just got beat at the wire. He was trying." 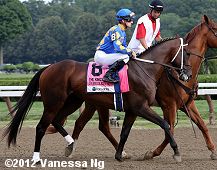 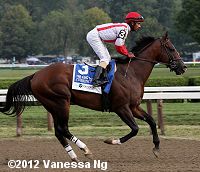 Left: Third place finisher Unbridled's Note in the post parade. The 11-1 shot settled in fifth under jockey Julien Leparoux 2 1/2 lengths back, then gained late to get third beaten just 1/2 a length. The Steve Asmussen trainee improved his record to 2 wins, 0 seconds, and 2 thirds in 6 starts, earning $135,701 for owner Mike McCarty.

Right: Sixth place finisher and beaten favorite Currency Swap. Trainer Terri Pompay said, "I think he wasn't really comfortable on the rail. He's better when he can get out and make a big run. When they turned for home, and he wasn't able to get him out, I knew it was going to be tough. He tried to make one run to come up through, but he doesn't get real comfortable that way."

Also on the card: Test Stakes and Ballston Spa plus the Ballerina from Friday