Also on the card with the Travers, a field of 10 three-year-old fillies contested the $500,000 Test Stakes (G3), a 7 furlong sprint over the main track. Acorn (G1) winner Contested was sent off as the even-money favorite off her fifth place finish in the Mother Goose (G1). In to challenge her included 5-2 second choice Book Review, an allowance winner last out, and 8-1 third choice Aubby K, off a fourth place finish in the Delaware Oaks (G2). 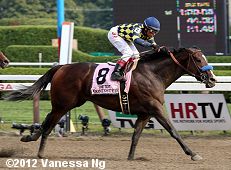 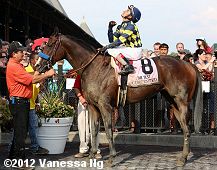 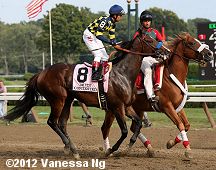 Left: Contested in the winner's circle. Jim Barnes, assistant to winning trainer Bob Baffert said, "I think she runs better off the pace. They were going very fast. I wouldn't have wanted to have been up with them. I said to Rafael, 'You got to play the break. If you catch a flyer, you can actually go. If you get away slowly, just put her in a comfortable, clean spot.' And he did."

Right: Contested in the post parade. Jockey Rafael Bejarano said, "My horse broke a little slow, but (Gypsy Robin) and (Ullapool) were going to go to the lead. I just tried to figure it out and get my horse in good position. When we came to the stretch the race was done. I had plenty of horse and she showed me a big kick. She didn't stumble; she just broke a little slow. I didn't try to rush; I just tried to get in good position. It actually benefited me because the horses on the lead were going very fast." 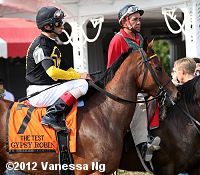 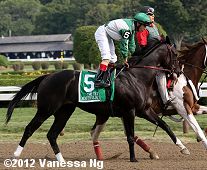 Left: Second place finisher Gypsy Robin heads out to the track before the race. Co-owner Gatewood Bell said, "She ran the way she had been training. We just got beat by a better horse. She ran her race, which was good to see after that race at Belmont in the Victory Ride. She had a weird ship to Belmont and it was hot that day. It was one of those races where you could draw a line through it. I was a little concerned about the pace when I saw Ullapool) go out there and set those early fractions, but Johnny (Velazquez) did a good job by taking her back and getting her to relax. I also think taking the blinkers off helped. Johnny thought he had it won until we got outrun in the end."

Right: Third place finisher Beautiful But Blue in the post parade. The 10-1 shot raced in fourth early 7 lengths back under jockey Junior Alvarado, then finished well to get third beaten 2 1/2 lengths. The Tom Bush trainee improved her record to 5 wins, 0 seconds, and 1 third in 10 starts, earning $293,550 for owner-breeders Chester and Mary Broman. 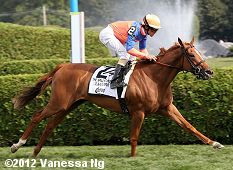 The first stakes race on Travers day was the $250,000 Ballston Spa Stakes (G2) for older fillies and mares going 1 1/16 miles on the Mellon turf course. Zagora was sent off as the 3-2 favorite in the field of 8 off her third place finish in the Diana (G1). In to challenge her included 5-2 second choice Tapitsfly, winner of the Just A Game (G1) before finishing fourth in the Diana, and 7-2 third choice Hungry Island, fifth in the Diana last out.

5-1 Summer Soiree was sent to a clear lead by jockey Julien Leparoux and she set fractions of 23.70, 46.35, and 1:09.44 over the firm course while as many as 3 lengths in front of Tapitsly and 59-1 longest shot Thundering Emilia. Summer Soiree continued to lead to mid-stretch but Zagora, fourth early, and Hungry Island, seventh early, closed late to pass the tiring pacesetter. Zagora outfinished Hungry Island by 1 1/2 lengths in a new course record time of 1:39.07. It was another 3 3/4 lengths back to Summer Soiree third.
Results chart 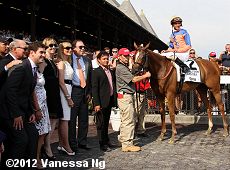 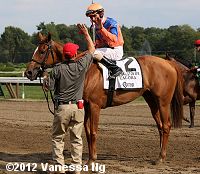 Left: Zagora in the winner's circle. Winning trainer Chad Brown said, "This filly had two really good works since the Diana. In hindsight, she probably needed the race. She loves Saratoga, especially when it's firm. She just exploded today. Ramon rode her beautifully. Down the backside, I was feeling pretty good. She had a horse directly in front of her, but those fractions were pretty demanding. I knew she was ready to run. When he tipped her out, it was pretty much over."

Right: Zagora returns after the race. Jockey Ramon Dominguez said, "I had an absolutely beautiful trip. (Summer Soiree) went at it, and I was able to sit back. When it was time, I went around and she finished up very nicely for me." 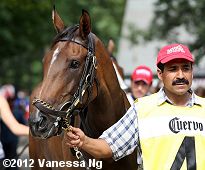 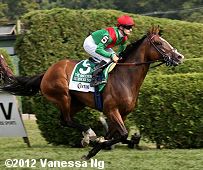 Left: Second place finisher Hungry Island in the paddock. The 7-2 third choice was seventh early under jockey John Velazquez, closed well but was no match for the winner. the Shug McGaughey trainee improved her record to 5 wins, 3 seconds, and 5 thirds in 15 starts, earning $508,770 for owner-breeder Emory Hamilton.


Kicking off the graded stakes action on Travers weekend, a field of 6 older fillies and mares sprinted 7 furlongs on Friday afternoon in the $500,000 Ballerina Stakes (G1), a Breeders' Cup Challenge "Win and You're In" event for the Filly and Mare Sprint. Turbulent Descent was sent off as the 2-5 favorite off her win in the Desert Stormer Handicap at Hollywood Park. In to challenge her included 3-1 second choice Nicole H, second in both the Vagrancy Handicap (G2) and Princess Rooney Handicap (G1), and 8-1 third choice Derwin's Star, seventh in the Molly Pitcher (G2) after winning the Bed O'Roses (G3).

Jockey Joel Rosario sent 20-1 All Due Respect to an uncontested lead exiting the chute and she set fractions of 23.02 and 45.33 while as many as 2 1/2 lengths in front of Nicole H and Turbulent Descent. Entering the stretch, Turbulent Descent easily passed the pacesetter, opening up a 2 length lead in mid-stretch through 3/4 in 1:09.04. Derwin's Star, fifth early, rallied late but Turbulent Descent easily held her off by 1 1/4 lengths, completing the trip in 1:22.13 over the fast main track. It was just 3/4 lengths back to All Due Respect third. 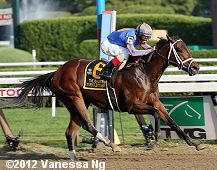 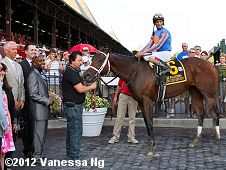 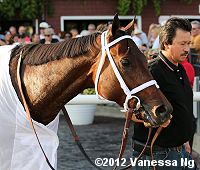 Left: Turbulent Descent in the winner's circle. Winning trainer Todd Pletcher said, "It's sort of rare you have an opportunity to buy a multiple Grade 1-winning filly with some races left and some opportunities. While it was certainly a fair price, it was still a lot of money. We felt based on her record there wasn't much downside. We talked about a couple of races, and this was one of them. So now, you're talking about a filly that's a Grade 1 winner at 2, 3 and 4, and it's pretty rare. Those are the kinds of mares you'd love to have in your broodmare band when their racing career is over."

Right: Turbulent Descent heads back to the barn after the race. Winning jockey John Velazquez said, "I had been working her quite a few times in the morning, and she's been working really well. The only thing we were a little concerned about today was being on the outside with her not being able to get behind horses. She can get pretty aggressive, but she relaxed a little bit the first part of the race. Turning for home we kind of bumped with the horse inside of us, and she got into the bridle a little bit earlier than I had hoped for, but she still ran a great race." 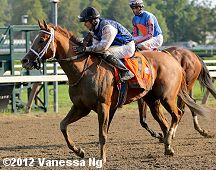 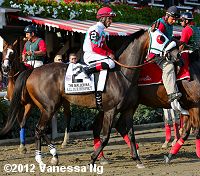 Left: Second place finisher Derwin's Star returns after the race. Trainer Steve Klesaris said, "She was tremendous. It was a very good effort. There are a lot of worse things than a Grade 1 placing." Jockey David Cohen added, "I definitely thought I had a chance. We were sitting chilly the whole way. We cut the corner and got to slingshot out at the top of the lane. Steve has done such an amazing job with this filly. He claimed her for $10,000 at Laurel and has won more than $400,000 with her."

Right: Third place finisher All Due Respect heads out for the post parade. The 20-1 shot set the early pace under jockey Joel Rosario, lost the lead at the 1/4 pole but held on to finish third beaten 2 lengths. The Richard Dutrow Jr. trainee improved her record to 4 wins, 5 seconds, and 6 thirds in 20 starts earning $421,880 for owners Paul Pompa Jr. and Taylor Brothers Properties.