It was no surprise that there were no scratches for the Travers Stakes, the Grade 1 "Mid-Summer Derby" and the highlight of the Saratoga meeting. A crowd of 43,153 ignored the rain and cold to witness some of the best three year olds first hand. With $1,000,000 and a potential three year old championship on the line, all nine entered horses braved the 1 1/4 miles of slop. As expected, Bobby Frankel trainee Medaglia d'Oro was sent off as the odds-on favorite off of his big win in the Jim Dandy where he earned a 120 Beyer speed figure. Attempting to make a comeback after being sidelined with injury after the Illinois Derby was Ken McPeek's Repent. Having missed the Triple Crown, he will need to play catch-up if he wants to make a run for an Eclipse Award. He was sent off at almost 4-1.

D. Wayne Lukas trainee Shah Jehan was hustled to the front to set the early pace, leading the procession through respectable splits of 23.14 and 46.82 before packing it in on the far turn. Pressing him all the way was the favorite Medaglia d'Oro, who inherited the lead after 6 furlongs in 1:11.53. Meanwhile, jockey Edgar Prado and Repent were outrun as far back as sixth place early on. Through the far turn, Repent ducked to the inside to pass three rivals, and was coming on strong in third place at the top of the stretch. Repent ate into Medaglia d'Oro's lead through the stretch run but the favorite dug in and would not be denied, holding him off to win by 1/2 a length in a time of 2:02.53. 31-1 shot Nothing Flat, who trailed the field for the first mile, rallied four wide on the far turn and, although too far back to offer any threat to the front two, finished well for third place beaten 8 lengths. 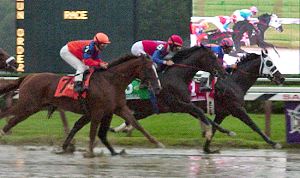 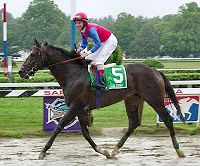 Medaglia d'Oro and Jerry Bailey return after the race. Bailey said: "I had a feeling it was (Repent) because he's a closer. I glanced back and saw the yellow towel and I glanced back again and still saw the yellow towel. I thought Repent would make a good run at it and flatten out from the eighth-pole home. He came to us all the way. I was surprised he got that close and stayed that close all the way to the wire." 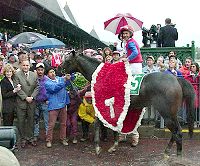 Medaglia d'Oro and trainer Bobby Frankel in the winner's circle. Frankel said: "I thought once he got in front, he would hang in there. He was very game and dug in. Repent really tested us. I'm proud of my horse. I was very surprised that Repent ran so good, but obviously he's a very good horse." 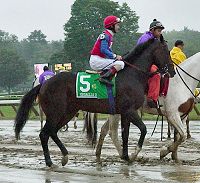 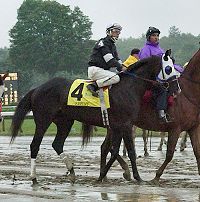 Second place finisher Repent in the post parade. His trainer Ken McPeek said: "He's run well off a long layoff before. Any time you stick your neck out like that you get nervous, but I had a lot of confidence. He always lays it down every time he runs. I thought we owned that horse (Medaglia d'Oro) at the eighth pole. I'm surprised the horse hung on like he did." 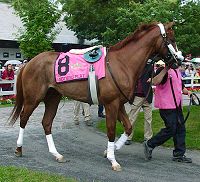 Third place finisher Nothing Flat in the paddock prior to the race. His jockey Jose Santos said: "Two days ago, Nick (trainer Zito) and I were talking about not taking the horse out of his game because he performs better when he comes way out of it. He actually lived up to his ability. I asked him to run in the last part of the race and he responded. He's still a little immature. He needs some more time and racing."