On Saturday afternoon at Saratoga, a field of six 3-year-old fillies went to post in the $250,000 Test Stakes (G1), a 7 furlong sprint on the main track. Conditions were ideal, with cloudy skies, temperatures in the mid 70's, and a fast track, with 25,020 on hand at the historic oval. As expected, champion Indian Blessing was sent off as the 2-5 choice, exiting a 5-length romp in the Prioress at Belmont after finishing second in two straight races, the Fair Grounds Oaks and the Acorn. In to challenge the daughter of Indian Charlie include 5-1 second choice Sweet Hope, winner of the Beautiful Day Stakes at Delaware last time out, and 7-1 third choice Palanka City, winner of the Miss Preakness Stakes at Pimlico in May in her last start, after winning the Prima Donna at Oaklawn.

Palanka City and 17-1 J Z Warrior were quickest to the front exiting the chute and they got the initial quarter in 22.62. Palanka City continued to lead into the turn through a half in 45.33, with Indian Blessing 5-wide the whole way and moving up to second. Entering the stretch, John Velazquez asked the champion for run and got it, as Indian Blessing easily disposed of the pacesetter at the quarter pole and opened up a 4 length lead at the 1/8 pole, getting 3/4 in 1:09.72. Sweet Hope, who was 5th early, moved up to second but issued no challenge to Indian Blessing, who cruised under the line 7 lengths in front, completing the 7 furlong trip on 1:22.70. It was another 3 lengths back to 21-1 longest shot Ms. Margaret H. in third. 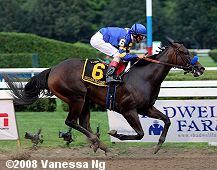 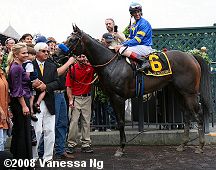 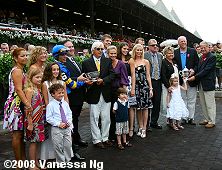 Left: Indian Blessing in the winner's circle with traner Bob Baffert by her head. Baffert, celebrating his first Test victory, said, "She's gotten better. After that last race, we found a dimension where she can relax. We were afraid to take her back and thought it would be disastrous. She's matured and learned how to relax. It's fun to be in this situation. Today, she reminded me of the great fillies I had trained: Silverbulletday and Chilukki. She looked fantastic in the paddock. I thought there weren't any excuses. You can tell that Johnny (Velazquez) was on cruise control. He was cruising around and then he turned her loose. Once she got away clean, I knew she was going to drag him to the lead. It's exciting for me to win the Test because I had a lot of bad luck. I would like to keep her on the dirt. I'm going to wait and enjoy this right now."

Right: The trophy presentation for the Test Stakes. 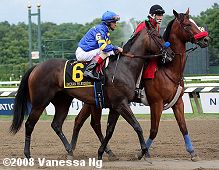 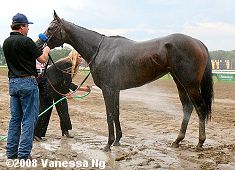 Left: Indian Blessing in the post parade. Winning jockey John Velazquez said, "It's pretty simple: she broke good, stayed in the middle of the track in the first part of the race and by the 3/8 pole, I just gave her her head and she was all there."

Right: Indian Blessing gets hosed off before heading back to the barn. 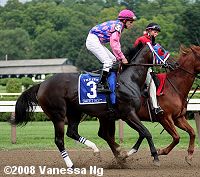 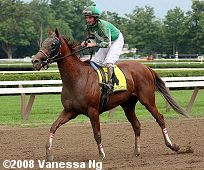 Left: Second place finisher Sweet Hope in the post parade. Her jockey Ramon Dominguez said, "I thought she ran great. I mean, she had a good trip. I tried to follow the winner, and we were just second-best today." The Larry Jones trained daughter of Lemon Drop Kid improved her record to 3 wins, 1 second, and 2 thirds in 11 starts, earning $122,209 for owner High Bank Syndicate.

Right: Third place finisher Ms. Margaret H. returns after the race. The 21-1 longest shot broke slowly and trailed the field for the first half mile under new jockey Robby Albarado, came out six wide into the stretch and passed tiring runners late to inherit third place money. The Ian Wilkes trained daughter of Point Given improved her record to 2 wins, 3 seconds, and 1 third in 10 starts, earning $113,044 for owner James W. Brady. 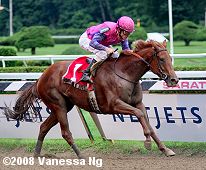 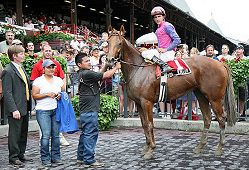 The undercard feature on Test day was the $80,000 Flanders Stakes at 6 furlongs, for 3-year-old fillies who have not won a graded stakes race this year. Lovely Isle was sent off as the 3-2 favorite exiting a gate-to-wire win in an allowance at Belmont. 7-2 third choice More Happy opened up a 2 1/2 length lead down the backstretch getting the quarter in 22.94 and the half in 45.86 before fading from contention. 7-1 fourth choice Porte Bonheur, who had raced in fourth early, found a hole on the inside to take the lead at the 1/4 pole. Lovely Isle, third early, had to come four wide for running room into the lane, allowing Porte Bonheur to draw away in the stretch, cruising under the line 2 lengths in front in 1:10.57 over the fast track. It was a long 3 3/4 lengths back from Lovely Isle to 16-1 Morakami third.
Results Chart

Winning trainer David Duggan said, "Delighted! What can you say? Everything is just hitting fire at the right time. She's a decent filly. The last time, she just got in trouble. She ran a credible race, she came back super and trained well, that's why we took a shot." He said Porte Bonheur would start next in the Victory Ride on the Travers undercard. 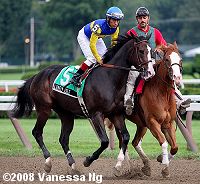 Second place finisher and beaten favorite Lovely Isle in the post parade. She was coming off a two race win streak in optional claiming races at Belmont Park after coming back from spending the spring in California.