The highlight of the Tampa Bay Downs racing season is the $400,000 Lambholm South Tampa Bay Derby (G2) at 1 1/16 miles on the main track. It is the major local prep for the Triple Crown series and worth 50 points to the winner as part of the Kentucky Derby Championship Series. Conditions were excellent at the Oldsmar oval, with 10,275 on hand under partly cloudy skies and temperatures in the high 70's, with the track fast and the turf course firm. Pasco Stakes winner Win Win Win was sent off as the 7-5 favorite in the field of 11. In to challenge him included 7-2 second choice Dream Maker off an allowance win, and 9-2 third choice Well Defined, winner of the Sam F. Davis (G3) after finishing 12th in the Breeders' Cup Juvenile (G1).

Jockey Irad Ortiz Jr. sent Win Win Win to the front first time past the stands and he set fractions of 24.54, 49.48, and 1:13.78 over the fast main track while pressed by 9-1 Tacitus and stalked by Outshine and 62-1 Dunph. Entering the lane, Win Win Win continued to lead to the 1/8 pole through 1 mile in 1:38.32, but Tacitus, confidently ridden by Jose Ortiz, collared him at the 1/16 pole and drew off the rest of the way to win by a length over Outshine in 1:44.72. It was a neck back to favorite and pacesetter Win Win Win third. 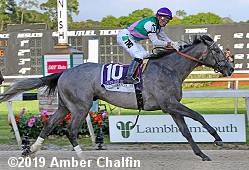 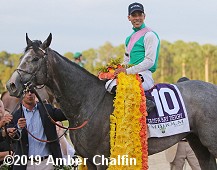 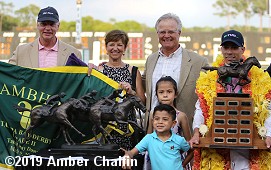 Left: Tacitus in the winner's circle. Winning trainer Bill Mott said, "He's been a big, growthy colt all along, and when we were breezing him in the middle of the summer he was just a big, laid-back horse. We didn't know what we had until we got into the fall. We've always liked this horse and thought he could be a horse that would be on the (Kentucky) Derby trail." 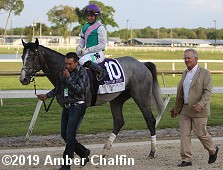 Tacitus with trainer Bill Mott after the race. Winning jockey Jose Ortiz said, "He's a big horse and when he made the lead, he didn't keep going; he kind of waited a little bit. He does everything so easy and I don't know if he's given me 100 percent yet (in his three races) – I don't think so." 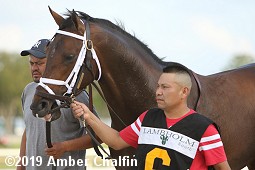 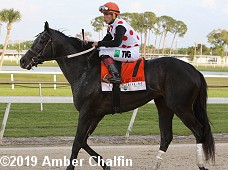 Left: Second place finisher Outshine in the paddock. This was the Todd Pletcher trainee's first graded stakes attempt and only his second start of 2019 after winning an allowance at Gulfstream Park in February.

Right: Third place finisher and beaten favorite Win Win Win returns after the race. His trainer Mike Trombetta said, "I want to go back and watch the head-on of the break; Irad said it was a little bit of a tangle out of the gate. I think he was satisfied with the way that he ran. I just think if he could have gotten a little better position early, we might have had more of a favorable outcome. He finished with good energy and just couldn't quite get it done." 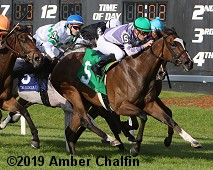 Immediately before the Tampa Bay Derby, a field of 11 three-year-old fillies went to post in the $200,000 Florida Oaks (G3) at 1 1/16 miles on the turf. Breeders' Cup Juvenile Fillies Turf (G1) 8th place finisher Concrete Rose was sent off as the 3-1 favorite over 13-4 Stellar Agent, third in the Juvenile Fillies Turf, and 7-2 La Feve, 3rd in the Sweetest Chant (G3). 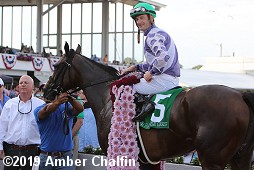 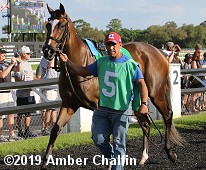 Left: Concrete Rose in the winner's circle. Winning trainer Rusty Arnold said, "This was a big one to get out from under her, to come off a layoff and carrying top weight. I was worried because she was a little bit hyper in the paddock, which she's never been, but she had never shipped, so I think we can handle that when we get back to Keeneland. This was a quality bunch. This is going to probably take something out of her, so we might wait until Churchill Downs (for her next start). I'm going to let her tell me. She hadn't been out in four months, but she is a talented filly and she has acted like a talented filly from Day 1, so we're very happy with her."

Right: Concrete Rose in the paddock. Winning jockey Julien Leparoux said, "She put me in the race nicely and we went pretty quick the first quarter, but we slowed it down very good the second part of the race. She was so relaxed and she does whatever you want with her, so I sat there and made one run and she had a nice kick at the end. She is a nice filly and she was still going at the finish." 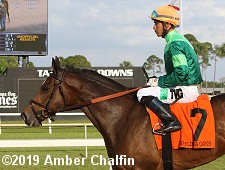 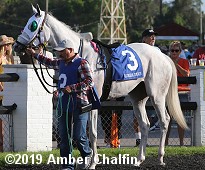 Left: Second place finisher Blowout returns after the race. The Chad Brown trainee was making her first start in stakes company and her first start since breaking her maiden in her debut race.

Right: Third place finisher La Feve in the paddock. Another Chad Brown trainee, she was making her second start in the United States after shipping over from France last fall. 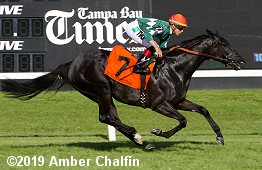 Kicking off the graded stakes trio was the $250,000 Hillsborough Stakes (G2) for older fillies and mares going 1 1/8 miles on the turf. Suwanee River (G3) runner-up Rymska was the 8-5 favorite in the field of 10 over 11-4 Hawksmoor, winner of the Endeavour (G3), and 3-1 Onthemoonagain, second in the Flower Bowl Invitational (G1).

Jockey Joe Bravo sent Hawksmoor to the front exiting the infield chute through slow fractions of 25.13, 49.74, qnd 1:13.55 while pressed by 13-1 Phantom Opening and stalked by Rymska. Hawksmoor continued to lead to midstretch through 1 mile in 1:37.71, but Rymska, 3rd the whole way under Irad Ortiz Jr., rallied past her at the 1/16 pole to win by 2 lengths in 1:49.18. It was a nose back to late-running Onthemoonagain third. 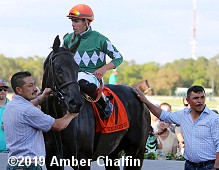 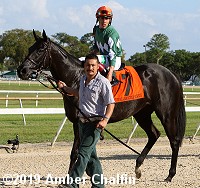 Left: Rymska heads to the winner's circle. Winning trainer Chad Brown said, "Irad rode a beautiful race. She got a beautiful trip and she responded well. She's been laying a little closer her last couple of starts, which I like to see, and she finished great."

Right: Rymska circles after the race. Winning jockey Irad Ortiz said, "She broke really well and I let her be forwardly placed early. I thought (No. 1, Phantom Opening) was one of the horses I had to beat, so I just tried to follow her because I knew she was going to take us a long way and when we got to the stretch, I thought I would pick them up. Everything worked out perfect. I had plenty of horse when I asked her. Chad (Brown) did a great job with her and she was ready." 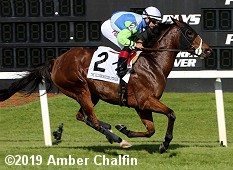 Second placer finsher Hawksmoor on the lead first time by. Her trainer Arnaud Delacourt said, "She ran her race and it's a great way to finish her career. She (Rymska) had beaten us once last year, so (the result) is kind of logical. She gave it her best shot and ran relaxed and finished very well." 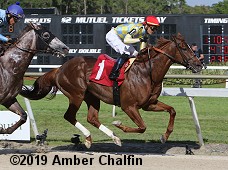 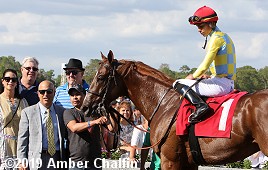 Winning trainer Mark Casse said, "Somebody was saying this reminded them of the Sam F. Davis (when Flameaway defeated Catholic Boy by a half-length), and we've said all along he's as game as he can be. We've had some issues with him; he actually cracked a rib when we ran him at Parx (in the Grade III Smarty Jones in August), so we gave him a break, and he has come back good and strong." 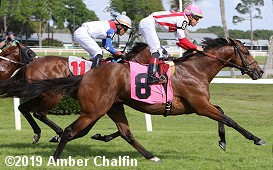 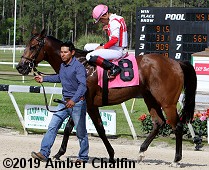 Winning trainer Chad Brown said, "We've liked this horse for a long time, and he showed a brilliant turn of foot down the stretch. He had plenty to do around the final turn and I wasn't quite sure he'd get there. I think this horse will improve as the distance increases, and he is an exciting horse moving forward."