Breeders' Cup Challenge "Win and You're In" weekend at Woodbine concluded on Sunday with races for 2-year-olds on the turf, each contested at 1 mile around 1 turn of the E.P. Taylor Turf Course. Similar to Woodbine Mile day, it was sunny and warm with temperatures near 80. The turf was again rated good-to-firm, with a GoingStick reading of 10.7.

A field of 8 two-year-old males contested the $200,000 Summer Stakes (G2) looking for automatic entry into the Breeders' Cup Juvenile Turf. Hemp Hemp Hurray was sent off as the 7-4 favorite, undefeated in 2 starts including the Tyro Stakes at Monmouth Park. In to challenge him included 3-1 second choice Untamed Domain, 3rd in the With Anticipation (G3) at Saratoga, and 4-1 third choice Count Alexander, a debut winner by 4 lengths at Woodbine last out.

Jockey Jose Ortiz sent 8-1 El Dulce to the lead and he set fractions of 23.89, 47.53, and 1:11.65 while pressed by Hemp Hemp Hurray and stalked by 10-1 Admiralty Pier. Entering the lane, jockey John Velazquez sent Hemp Hemp Hurray to challenge, gaining a short lead at the 1/8 pole, but Unbridled DOmain, 5th early under Joe Bravo, came out wide for room but despite lugging in through the final 1/16, got up to win by a neck in 1:34.73. It was another 1/2 length back to Admiralty Pier third.

Also on the card was the Natalma Stakes (G2) won by Capla Temptress. 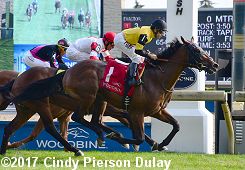 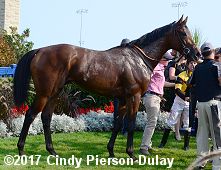 Left: Untamed Domain in the winner's circle. Winning jockey Joe Bravo said, "This horse is a big horse; he needs a little bit of learning. The whole puzzle really came together today. Graham did a great job by putting the blinkers on for the first time." Untamed Domain is the first graded stakes winner for sire Animal Kingdom.

Right: Untamed Domain heads back to the barn. Bravo added, "He's a very big horse that is just learning and my main thing was just to get him plenty of room and keep him out of trouble turning for home. I had to swing three-wide and he just levelled off so beautifully. Graham knew what he had, he knows he has a special horse." 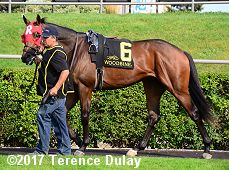 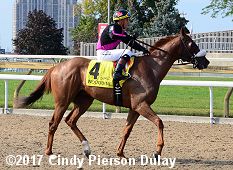 Left: Second place finisher and beaten favorite Hemp Hemp Hurray in the paddock before the race. Jockey John Velazquez said, "Perfect trip. He was a little bit strong the first part of the race and that was it. He didn't have enough to fight down the lane."


A field of 9 two-year-old fillies contested the $250,000 Natalma Stakes (G1), with the winner earning a berth in the Breeders' Cup Juvenile Fillies Turf. Wonder Gadot was sent off as the 2-1 favorite off her 4 length debut win over the Woodbine turf. In to challenge her included 5-2 second choice March X Press, undefeated in 2 starts including the Bolton Landing Stakes at Saratoga, and 11-2 third choice Capla Temptress, third in the Sweet Solera Stakes (G3) at Newmarket and making her North American debut here. 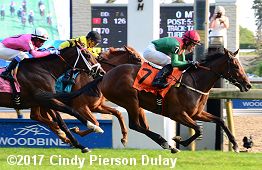 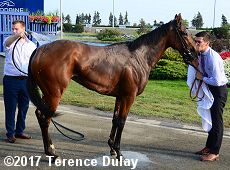 Left: Capla Temptress in the winner's circle. Winning owner Barry Irwin said, "I bought her with this plan in mind. She's a fighter. She's small, but she's got a long stride and she's all heart" She really is quite small.

Right: Capla Temptress gets a kiss while being hosed off after the race. Winning jockey Joel Rosario said, "She broke very nice and for a second I had a little clear spot. I was just looking to follow Patrick (Husbands). He was on one of the speed horses (Wonder Gadot) on the outside. I was trying to let her be behind somebody all the time. She was very nice. I had to tap her a little bit on the backside to get her attention. After that, she did the job." 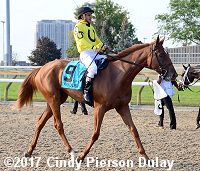 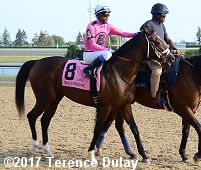 Left: Second place finisher Dixie Moon returns after the race. Jockey Eurico Da Silva said, "My filly is a fantastic filly. The first time I got on this filly, I knew she was a very good horse. It's too bad we got beat today, but she's going to come back and beat these horses. I'm telling you, she's a very nice horse. I'm very pleased with the race. She was not very focused at the end. It's just her second race and it's a lot to ask to run with big horses, but we are very, very happy." 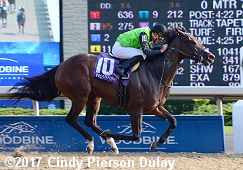 On the undercard, the $100,000 Sweet Briar Too Stakes featured a field of 7 older fillies and mares sprinting 6 1/2 furlongs on the Tapeta main track. Royal North (G3) 6th place finisher Southern Ring was the 9-5 favorite over 9-4 Sky My Sky, 2nd in the Seaway (G2), and 9-2 Sugar Jones, winner of 3 straight in allowance company. Jockey Eurico Da Silva sent Southern Ring to the lead exiting the chute through fractions of 22.46 and 45.00 while pressed by Sky My Sky and stalked by 42-1 longest shot Veaisha. Entering the lane, Southern Ring tired as 11-1 River Maid, 7th early, moved up to gain a short lead through 3/4 in 1:09.49. 11-2 Moonlit Promise, 6th early under Gary Boulanger, rallied on the inside to win by 3/4 length over River Maid in 1:15.66. It was another 2 3/4 length back to favorite Southern Ring third. 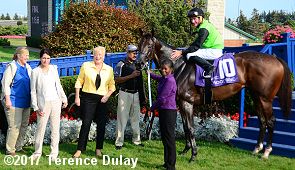 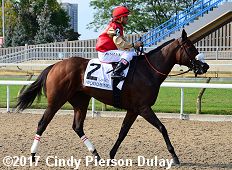 Left: Moonlit Promise in the winner's circle. Winning jockey Gary Boulanger said, "She's a pretty good filly and she broke well. I was just kind of letting her tell me what the pace was – I thought it was pretty hot up there – and biding my time. A couple guys were kind of keeping me wide and no one was wanting to tuck in so at the 3 1/2f pole I said, ‘I gotta go inside and save some ground here if I'm going to run these guys down.' I dove inside and here she came with a big run. A tremendous filly. Josie's done a great job getting her ready and her team is a great team. I'm just grateful I get to ride something like this."