Belmont Park in New York hosted two Grade 1 stakes events on the last Saturday in June. A crowd of 6,184 was on hand on a sunny afternoon with temperatures in the high 80's. The headline event of the card was the $400,000 Suburban Handicap (G1) for older horses going 1 1/4 miles on the main track. Todd Pletcher trainee A.P. Arrow was sent off as the 5-4 favorite in the field of eight, exiting a distant 4th place finish to Curlin in the Dubai World Cup in his last start. In to challenge him was 4-1 second choice Rising Moon, winner of four straight going into this race, including a 4-length romp in an allowance last time out. Also in the field were two horses at 5-1, Argentinian-bred Solar Flare making his second American start after winning an allowance at Delaware last out, and Harlington, winless since the Gulfstream Park Handicap in March.

A three-horse battle for the lead ensued right from the start, as 23-1 Naughty New Yorker on the inside, Solar Flare in the center, and 40-1 longest shot Frost Giant on the outside, changed the lead amongst themselves through fractions of 24.30, 48.55, and 1:12.03 over the fast main track. Naughty New Yorker tired badly after 3/4 mile, as Solar Flare led the field at the top of the lane, getting a mile in 1:36.31. Solar Flare pulled ahead by 1/2 a length at the 1/8 pole, but Frost Giant fought back late, pulling ahead to a 1/2 length win in 2:01.58. It was another 3 lengths back to Rising Moon third. Favorite A.P. Arrow was never in contention and showed no rally, finishing a disappointing sixth. 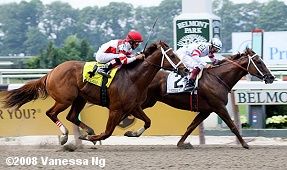 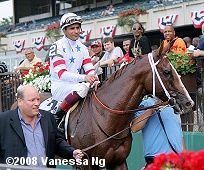 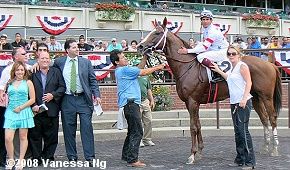 Left: Frost Giant takes his walk down Victory Lane. Winning His trainer Richard Dutrow Jr. said, "Rudy (Rodriguez), I've got to tell you, gave this horse a very good ride. He rode him great, man. Usually, he's go, go, go. But I am so happy for him. For the last two or three weeks, this horse settled down in the mornings. This was mostly Rudy, not just today, but in the mornings. You could see it happening. The owners paid a lot of money for this horse, and it worked out great. I'll be all right now. This gets me back in the game."

Right: Frost Giant in the winner's circle. Trainer Richard Dutrow Jr. is in the white shirt on the far left. 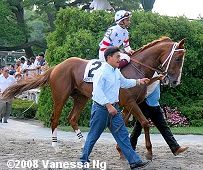 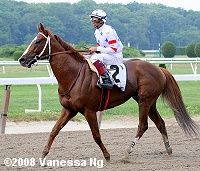 Left: Frost Giant heads out of the paddock before the race. Winning jockey Rudy Rodriguez, celebrating his first Grade 1 victory, said, "I get on him in the morning, and he has really been different lately. We've had him a few years, but he seems to have a new attitude. He was scratched on Wednesday, and that looks like it turned out to be a good thing. I was able to learn a lot about him. I was very happy Mr. Dutrow kept me on this horse. It was not an easy race, but he ran great." 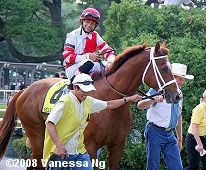 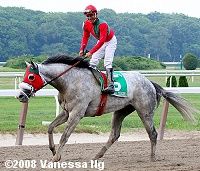 Left: Second place finisher Solar Flare leaving the paddock before the race. His trainer Larry Jones said, "We can live with this one. It was his first time in Grade 1 company. It looks like he just got a little tired at the end."

Right: Third place finisher Rising Moon returns after the race. His trainer Richard Dutrow Jr., who also trains winner Frost Giant, said in the winner's circle, "I bet on (Rising Moon). Cornelio (Velasquez, jockey) said he had nothing to offer, so I am going to scope him." 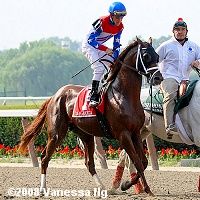 Sixth place finisher and beaten favorite A.P. Arrow in the post parade. His trainer Todd Pletcher said, "He didn't behave well in the gate. He didn't get away we'll and he never recovered from that." Jockey Ramon Dominguez added, "He was very aggressive in the gate. Then, he was a little too relaxed."

Immediately before the Suburban, just four 3-year-old fillies entered the $250,000 Mother Goose Stakes (G1), contested at 1 1/8 miles around one turn of the main track as the second leg of the New York Triple Tiara. As expected, Kentucky Oaks and Fair Grounds Oaks winner Proud Spell was sent off as the 1-2 favorite, with regular rider Gabriel Saez in the irons for trainer Larry Jones. In to challenge the daughter of Proud Citizen was 8-5 second choice Music Note from the Godolphin Stable, coming off two straight 7-length romps (in a maiden and then an allowance) and making her stakes debut. Completing the field were 10-1 Never Retreat, third in the Susan's Girl at Delaware last out, and 13-1 Hamsa, making her stakes debut after two straight wins.

Three of the four entrants stumbled at the start, allowing Never Retreat, the only filly to break cleanly, to get to the lead easily at the start. Proud Spell recovered and quickly moved up to battle for the lead on the inside, as Never Retreat set fractions of 24.83, 48.66, and 1:13.09 over the fast main track. Music Note stalked the pacesetters out wide in third down the backstretch, moving up to take second from Proud Spell at the 3/8 pole. Turning for home, jockey Gabriel Saez asked Proud Spell for run but she ran into traffic on the inside and was forced to check. This allowed Music Note to take command at the 3/16 pole and pull away to a 2 length lead with a furlong to go, getting a mile in 1:37.52. Proud Spell veered sharply to the right despite being whipped right-handed by Saez, bumping Never Retreat. However, Music Note was long gone, cruising under the line 3 1/2 lengths ahead of Proud Spell in 1:49.75. It was another 1 3/4 lengths from Proud Spell to Never Retreat, and then 2 3/4 more to last place finisher Hamsa. The stewards immediately called an inquiry into the stretch run, and disqualified Proud Spell from second to third behind Never Retreat for interference. 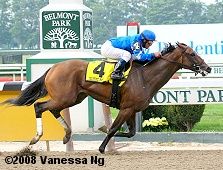 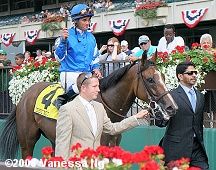 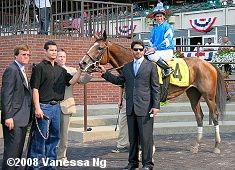 Left: Music Note takes her walk down Victory Lane with trainer Saeed bin Suroor leading to the right. Suroor said, "We fully expected that she would run a big race, but we know it would be a tough race with the Oaks winner in the field. I told (Javier Castellano), just keep her close. She's got a good turn of foot. Right now, we'll keep our options open with her, see how she comes out of the race and look for another Grade 1, 9 furlongs or 1 1/4 miles. The Alabama would be one of those options." 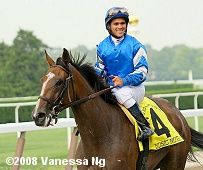 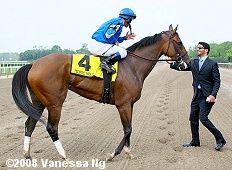 Left: Music Note and a happy Javier Castellano return after the race. Castellano said, "I had a beautiful trip, even though she stumbled at the start. I tried to position myself; I did not want to be on the lead. It was a pretty tight trip. I wanted to be in position to just push the button. She gallop out good, and I don't think she will have a problem going farther." 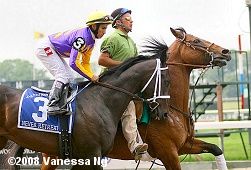 Second place finisher Never Retreat in the post parade. The 10-1 third choice was the only one of the four to break cleanly, setting the pace for 6 furlongs under jockey Alan Garcia before surrendering the lead to the winner at the 3/16 pole, then was carried out wide by Proud Spell late, earning her the improvement in placing by the stewards. The Kiaran McLaughlin trainee improved her record to 2 wins, 1 second, and 1 third in 4 starts, earning $112,050 for owner Jeff Singer. 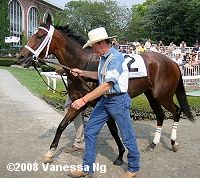 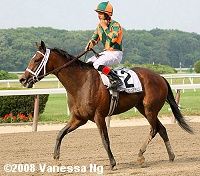 Left: Trainer Larry Jones leads third place finisher (disqualified from second) Proud Spell in the paddock. Jones said, "From the very start, we were against it. She looks like she's okay; she didn't grab a quarter or nothing. From the beginning, it looked like it wasn't going to be our day. When we needed somewhere to go, we had nowhere to go. And when it was time to go, we weren't going." 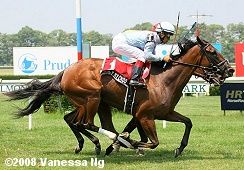 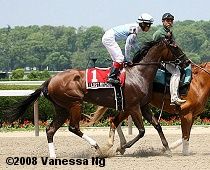 Kicking off the stakes action on Saturday was the $75,000 Elmont Stakes for New York bred 3-year-old fillies at 1 mile on the Widener turf course. 9-1 Canadian Ballet battled on the pace with 55-1 longest shot Go Go Bar through a quarter in 23.42 and a half in 46.89 over the firm turf. After 3/4 mile in 1:11.31, Go Go Bar tired badly and faded to last, as Canadian Ballet let the field into the final furlong. However, the fast pace set the race up for the closers. 3-5 favorite I Lost My Choo, who was fifth early, came out wide at the 3/16 pole and closed with a rush, getting up to win by a head over another closer, 7-1 Blitzen Too, in 1:34.26. It was another 2 1/4 lengths back to 13-1 Ambidaxtrous third.
Results Chart

Right: I Lost My Choo in the post parade.