The $100,000 Stuyvesant Handicap (G3) features older horses going 1 1/8 miles, one full lap of the main track at Aqueduct Racetrack. Just 3,743 were on hand on a chilly Saturday afternoon where a field of just six made the gate after Malibu Moonshine and Naughty New Yorker were scratched. Japanese-bred Utopia was sent off as the lukewarm 2-1 favorite, having won the 2006 Godolphin Mile at Nad al Sheba and then the Westchester at Belmont in his first American start after an extended layoff. He followed that up with a 6th in the Meadowlands Cup. In to challenge him were 3-1 second choice Awfully Smart, winner of the Stymie at Delaware last out, and 7-2 Barcola, winner of the Kelso also at Delaware.

Jockey Kendrick Carmouche hustled Barcola to a clear lead around the clubhouse turn, opening up a 1 1/2 length advantage through fractions of 24.05, 47.59, and 1:10.95 over the fast surface while hugging the rail the whole way. 5-1 Who What Win stalked him in second while favorite Utopia sat back in fourth taking both turns wide. Entering the stretch, Barcola tired from the fast early pace, eventually finishing last, as Utopia put in his rally on the far turn, taking over the lead at the 3/16 pole. However, 9-1 longest shot Hunting, who was unhurried early, closed well on the far outside to pass Utopia late to win going away by a length in a time of 1:48.08. It was another 1 1/4 lengths back to 6-1 Evening Attire in third.

Aqueduct also had their first-ever Turkey Calling Contest with a grand prize of a VIP package for two to the Belmont Stakes valued at more than $1,000. Russel Warrick of Queens won with a hilarious performance. Check out some photos here for a good laugh. 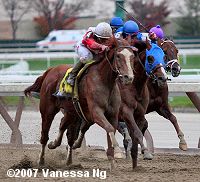 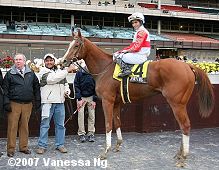 Hunting in the winner's circle his trainer Shug McGaughey on the far left. McGaughey said, "He's been doing pretty good. His last race was a good race. I looked around in the condition book and didn't really see anything for him. Alan rode him great. I think the secret to him is to just let him drop back. They went slow the first quarter, but they picked it up from there. I told my wife, Allison, around the middle of the far turn that he was going to fire. It was just a matter of whether they'd come back to him. I think he beat a pretty nice horse in Utopia, so I'm pretty pleased with his progression. He might come back in the Queens County (December 8th)." 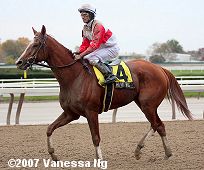 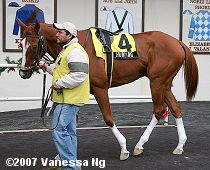 Left: Hunting returns after the race. His jockey Alan Garcia said, "My horse felt really good today. We had a good trip and I knew I had a lot of horse coming to the top of the stretch. He kicked hard when I asked him and he ran good."

Right: Hunting in the paddock. 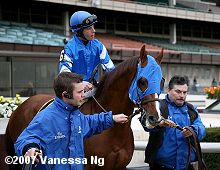 Second place finisher and beaten favorite Utopia heads out for the post parade. Utopia was in tight quarters early, wide around both turns under jockey Mike Luzzi, and put in a strong rally to take over the lead with a furlong remaining but was outfinished by the longshot. The Saeed bin Suroor trainee improved his record to 9 wins, 5 seconds, and 3 thirds in 34 lifetime starts, with total earnings of $4,913,585. 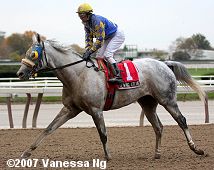 Third place finisher Evening Attire returns after the race. The popular 9-year-old hesitated at the start, was last early on but saved ground on the clubhouse turn under jockey Jose Espinoza, then finished gamely on the outside late to get third money. The Patrick Kelly trainee improved his record to 13 wins, 13 seconds, and 9 thirds in 62 lifetime starts, earning $2,685,754 for owners Mary and Joseph Grant and Thomas J. Kelly.