Besides the Stuyvesant Handicap (G3) on Saturday, Aqueduct Racetrack featured their first-ever Turkey Calling Contest. The best imitation of a wild turkey gobble, as judged by a blue-ribbon panel, won a VIP package for two to the Belmont Stakes valued at more than $1,000. Included in the grand prize are a gourmet buffet in the Marquee II, full premium open bar, preferred clubhouse reserved seating, parking, admission, official track program and entertainment for the final leg of racing's Triple Crown.

Russel Warrick, age 60, of Hollis, Queens, out-gobbled 34 competitors Saturday to win the grand prize. Warrick, who grew up in Trinidad and Tobago, was the unanimous choice of a panel of judges to win the VIP package for two to the 2008 Belmont Stakes. Here is a look at his prize-winning form, which included jumping around and flapping his "wings" while gobbling. 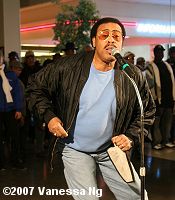 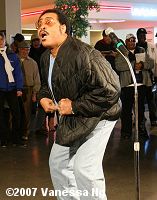 "When I was growing up we had a lot of different types of fowl in our backyard," said Warrick, whose wife entered him in the contest. "I used to tease the turkeys by calling them."

Every entrant in the contest was a winner, with those over the age of 21 receiving promotional T-shirts and caps from Wild Turkey bourbon, and youngsters awarded Saratoga caps and chocolate turkeys. Turkey Day at the Big A also featured free drawings for prizes ranging from round-trip tickets for two on Delta Airlines, passes to the Radio City Christmas Spectacular, holiday turkeys, and more.

Here are a few of the other competitors and what they were willing to do to get the grand prize. 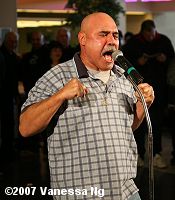 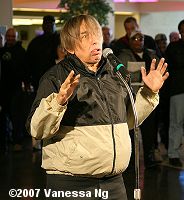 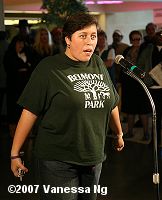 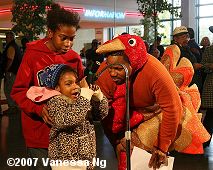 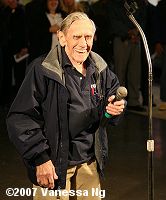 Left: This little girl was too nervous to gobble until Tony the Turkey promised her chocolate. That worked.

Right: Louis from the silks room who competed just for fun since he is NYRA staff. 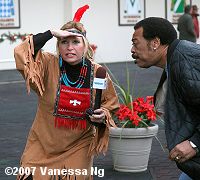 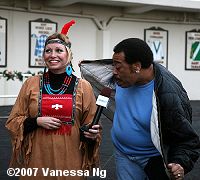 NYRA TV host Jan Rushton, dressed as Pocahontas, looks for the turkey in the paddock and seems a bit embarassed when he sneaks up on her and does his gobbling routine. 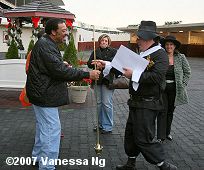 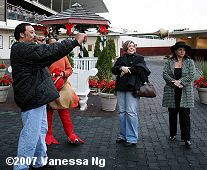 Bugler Sam Grossman, dressed as a Pilgrim for the day, lets Russel try out his trumpet. Afterwards, he said "You should be ready for the Belmont Stakes now."