There were two graded stakes events on Friday at Keeneland Race Course, both over the turf course. A record Friday crowd of 23,882 was on hand, enjoying sunny skies and the 85-degree temperatures. First of the day was the $100,000 Shakertown Stakes (G3), a 5 1/2 furlong sprint. A full field of twelve went to the gate here, with two-time winner and 2004 Canadian Horse of the Year Soaring Free the 5-2 favorite with new jockey John Velazquez aboard.

13-1 shot Yucatan went right for the lead early and led the pack down the backstretch through a quarter in a brisk 21.71, with 4-1 second choice Mighty Beau stalking him in second. Velazquez kept the favorite on the inside to save ground on the turn, back in fourth early. Yucatan held the lead to the 1/8 pole but the fast pace set the race up for the closer. 8-1 shot Atticus Kristy, back in seventh early on, took a wide path to stay out of trouble the whole way, and closed strongly through the lane to wear down another closer, 6-1 Around the Cape, to get the victory by a neck in a time of 1:01.83 for the 5 1/2 furlong trip over a firm course. The time was just 0.11 seconds off the course record. It was 1 3/4 lengths back to deep closer Man Of Illusion in third, while pacesetting Yucatan finished fourth. Soaring Free looked to be boxed in at the top of the stretch and when Velazquez did find running room, he failed to fire and finished a disappointing sixth.
Results Chart from DRF. 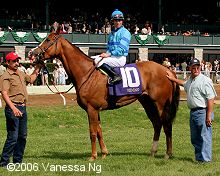 Atticus Kristy in the winner's circle. Winning jockey Garrett Gomez said, "Yeah, I had a pretty good trip all the way except when we first started the in turn I got shuffled a little bit, but from then on I had a really good trip. (Trainer) Mel (Scherer) told me he had tactical speed and I kind of nursed him along. I uncovered him when we turned for home and he did what he was supposed to do and what I was expecting him to do." Winning trainer Mel Scherer said, "He likes this one (turf course). He got beat in a picture here last year (beaten a nose by Sgt. Bert in the 2005 Woodford). He likes the turf very much, but he likes the dirt too." Scherer said he would start next at Churchill Downs, possibly in the Aegon Turf Sprint. 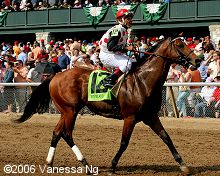 Second place finisher Around the Cape in the post parade. 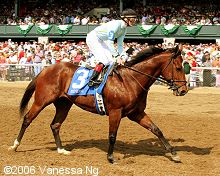 Third place finisher Man of Illusion in the post parade. 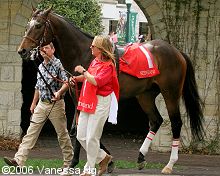 9-1 shot Gulch Approval got the lead early and led the pack around the clubhouse turn through a quarter in 24.11 and a half in 47.93, attempting to slow down the pace on the front end. However, Garrett Gomez aboard Artie Schiller was not fooled, as he took over the lead taking a wide trip on the far turn, and had the lead at the top of the stretch. Artie Schiller looked to be home free, but 6-1 second choice Miesque's Approval, who was in fifth early, went very wide around the turn and was gaining on the favorite. At the wire, the pair finished very close together, but the photo finish determined that Miesque's Approval did get up for the nose victory, in a time of 1:34.06 over Artie Schiller. It was 2 lengths back to 7-1 shot Good Reward in third.
Results Chart from DRF. 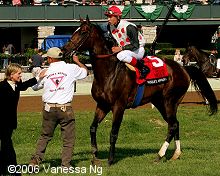 Miesque's Approval acting up in the winner's circle. A tearful Karla Wolfson, wife and assistant of winning trainer Marty Wolfson (far left), said, "I want to thank (winning owner) Mrs. Charlotte Weber for the opportunity to train this horse. A tremendous ride from Eddie Castro as usual. He is a better jockey than even he knows he is. He is one of a kind." 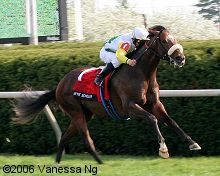 Second place finisher and beaten favorite Artie Schiller at the finish. His jockey Garrett Gomez said, "He ran a really good race. I had him in good position just off the four horse (leader Gulch Approval), so it was mission accomplished. I pushed him a little but he wasn't getting on his feet. Then he found another gear. The other horse (winner Miesque's Approval) was coming on so fast I don't think he (Artie Schiller) saw him. But it was a really good effort for him coming off a layoff."