The $750,000 Toyota Blue Grass Stakes (G1) is historically the best prep race for the Kentucky Derby. An on-track crowd of 30,660 was on hand and enjoyed another sunny day at Keeneland for this prestigious event for 3-year-olds going 1 1/8 miles on the main track. A field of nine went to the post in this year's edition, with Bluegrass Cat sent off as the 9-5 favorite off his second place finish in the Tampa Bay Derby and a win in the Sam F. Davis. Strong Contender was the 5-2 second choice despite having no stakes starts and making only his 3rd career start.

When the gate opened, 9-1 shot Sinister Minister was hustled up to the front by jockey Garrett Gomez after breaking poorly. Sinister Minister was loose on the lead down the backstretch, rattling off very fast fractions of 22.91, 45.88, and 1:09.94 over the fast main track. Bluegrass Cat sat back in third and Strong Contender in fourth, as many as seven lengths off the pace of Sinister Minister. When Sinister Minister straightened out at the top of the stretch, Gomez asked him for his best and got it, as he pulled away to an 8-length lead at the eighth pole, getting the mile in 1:35.45. 66-1 outsider Storm Treasure, who sat back in sixth early, made up a lot of ground, passing most of the field around the far turn, but was left with too much to do as Sinister Minister hit the line 12 3/4 lengths clear, completing the 9 furlong trip in 1:48.85 over a fast track. It was another 4 1/2 lengths back from Storm Treasure to Strong Contender in third, and 4 more to favorite Bluegrass Cat in fourth.
Results Chart from DRF. 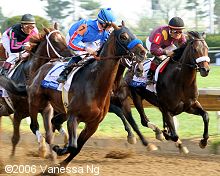 Sinister Minister cuts over to the inside for the lead at the start of the Blue Grass. Winning jockey Garrett Gomez said, "He was a little throttled up from laying over on the field, and I had his mouth gagged over going into the first turn. Once I headed up the backside I just kind of let him out a notch and tried to just get him to find his stride and get comfortable. I knew we were going pretty fast; I didn't know we were going that fast. I thought he went like :46 and change. I was trying to rein him in a little around the first turn and I was actually taking a little too much hold of him. So when I headed up the backside I went ahead and let him out a notch and let him do his thing. I wouldn't say I thought I had the race won (down the backstretch). It was all in the way he was going to respond to me when we turned for home. Once we headed to about the 3/8ths pole, he seemed to start to come back to me a little bit more than I liked. And I said, 'I'm going to go now.' I thought I went fast enough that as long as I had him going I wouldn't give anyone a chance to even get close to him." 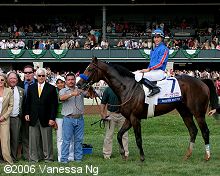 Sinister Minister in the winner's circle. Winning trainer Bob Baffert (wearing the black coat) said, "We said 'Let's see how he works,' and Garrett (Gomez) worked him unbelievable. I called (co-owner) Bernie (Schiappa) and said 'Get the jet ready, we are coming.' He's been here, he loves the surface, it's soft. We knew we were going to get the lead. I was hoping to get like a 23 and change (first quarter). He's pretty fast, that's how he likes to run. When he got to the quarter pole I thought 'Son of a gun, you might win the Blue Grass.'" 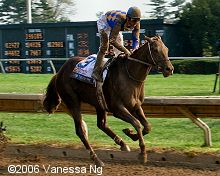 Second place finisher Storm Treasure runs out after the race. Scott Blasi, assistant to trainer Steve Asmussen said, "He is a nice horse. He is improving with every race. He was made to run all day. He is a mile-and-quarter horse and he'll stay the distance." Jockey Mark Guidry added, "My colt ran a great race. The little horse ran really good. Steve (Asmussen) thought he would run really good or he would not put him in a spot like this. I don't think they thought he would run this good but he ran great." 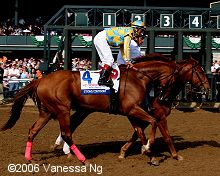 Third place finish Strong Contender in the post parade. His jockey Edgar Prado said, "My horse didn't break that sharp but I think I was in the place to be. The horse (on the front) went really fast early on and I was hoping he would come back. My horse started to run on the far turn but when the race didn't unfold like I thought, you have to work with that. He's a big, nice horse. He learned a lot today and he handled it very professionally and I hope he comes back again." Unfortunately the third place earnings were not enough to get Strong Contender into the Kentucky Derby field. 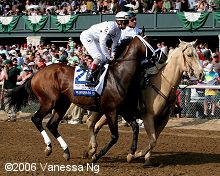 Fourth place finsher and beaten favorite Bluegrass Cat in the post parade. His jockey John Velazquez said, "It's pretty strange because he ran pretty even. He got a good position going to the first turn and I thought he was in perfect position. I asked him (for run) and he didn't go anywhere. He didn't stop but he just didn't continue to run. He just went even all the way around. I don't know what to tell you really. He's been training really good and he didn't perform the way he was training. Maybe he just didn't like the track." Trainer Todd Pletcher added, "Initially he seemed to come back fine. Obviously, he didn't run the race we expected. We'll give it a few days and sort it out." 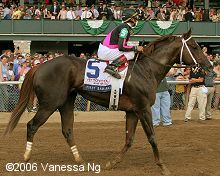 Fifth place finisher and second favorite First Samurai returns after the race. His jockey Rafael Bejarano said, "I don't think he wants to go 1 1/8 miles. I think he's better at about a mile. He's going to be a nice horse. When I saw the horse on the front getting away, I thought he would stop but he never did. I just could not catch the winner; he went wire-to-wire. I tried to be second best but he still tried. Next time he will be much better."