The highlight race of the Turfway Park winter-spring meeting is the $550,000 JACK Cincinnati Casino Spiral Stakes (G3), contested at 1 1/8 miles on the Polytrack. Conditions were excellent for this key Triple Crown prep worth 100 points to the winner as part of the Kentucky Derby Championship Series, run just 6 weeks before the Kentucky Derby, with overcast skies and temperatures in the mid 70's. A field of 11 three-year-olds went to post on Saturday afternoon, with Kitten's Joy Stake winner Kitten's Cat sent off as the 5-2 favorite off his second place finish in the Palm Beach Stakes (G3). In to challenge him included 9-2 second choice Parlor, an allowance winner at Tampa after finishing a close second in the Kentucky Downs Juvenile, and 13-2 third choice En Hanse, second in the John Battaglia Memorial after winning the WEBN Stakes.

Jockey Robby Albarado sent En Hanse to the lead first time by through fractions of 23.22, 46.36, and 1:10.22 while pressed by Parlor and stalked by 24-1 Fast and Accurate. Into the lane En Hanse tired as jockey Tyler Gaffalione sent Fast and Accurate to the lead through 1 mile in 1:36.85. Kept to task by Gaffalione, Fast and Accurate held off late-running 35-1 Blueridge Traveler for the 3/4 length win in 1:50.96. It was another 1/2 length back to 10-1 Convict Pike third, while favorite Kitten's Cat checked in another 1/2 length back in fourth. 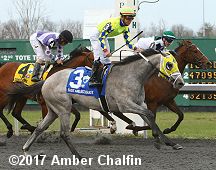 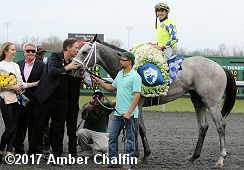 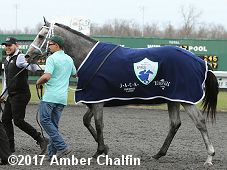 Left: Fast and Accurate in the winner's circle. Winning owner Dr. Kendall Hansen (giving him a kiss here) said, "I never thought I'd have another horse like him. But (sire and namesake) Hansen is the gift that keeps on giving. I never thought I'd get to the Kentucky Derby again." Hansen will supplement the colt to the Derby with a $200,000 fee.

Right: Fast and Accurate heads back to the barn after the race. Winning trainer Mike Maker said, "He's a Pennsylvania-bred and we didn't think anyone would [claim] him. Plus we wanted to get more winners for Hansen [the sire]. I know he led all the way to win, but actually the race really impressed me." 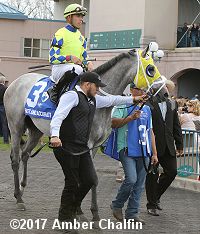 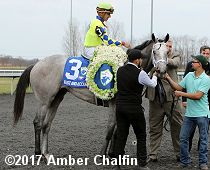 Left: Fast and Accurate in the paddock before the race.

Right: The trophy presentation for the Spiral Stakes. Winning jockey Tyler Gaffalione said, "The race set up beautifully. I looked to the outside and I saw [En Hanse] going to the lead, and [Maker] told me if the other one broke better to just sit behind him. We had a beautiful trip going into the far turn. I put him on the outside and he just hit another gear. Down the lane he just kept lengthening his stride." 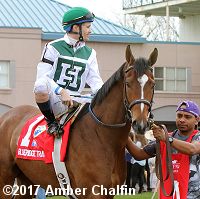 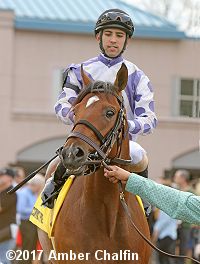 Left: Second place finisher Blueridge Traveler in the paddock. The Ken McPeek trainee has a record of 1 win, 3 seconds, and 0 thirds in 5 starts, earning $156,340 for owner Horizon Stables.

Right: Third place finisher Convict Pike in the paddock. The George Arnold trainee has a record of 1 win, 2 seconds, and 2 thirds in 7 starts, earning $108,407 for owner Ashbrook Farm. 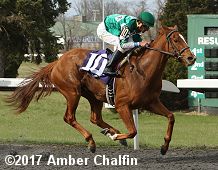 The distaff counterpart to the Spiral is the $100,000 Bourbonette Oaks (G3), worth 50 points tohe winner in the Kentucky Oaks Championship Series. A full field of 12 three-year-old fillies went to post in this 1 mile Polytrack contest, with Cincinnati Trophy Stakes winner Delphinia sent off as the 9-5 favorite. In to challenge her included 3-1 second choice Darkwingsoverdubai, undefeated in 2 starts at Golden Gate and making her stakes debut here, and 8-1 third choice Gilded Lily, also undefeated in 2 starts, all at Turfway.

Jockey Luis Saez sent Delphinia to the lead first time by through fractions of 23.47 and 47.43 while pressed by 53-1 I'mluckysgirl and stalked by 13-1 Purely a Dream and Gilded Lily. Entering the lane, Delphinia tired allowing Purely a Dream to inherit a 1 1/2 length lead through 3/4 in 1:10.93. Kept to task by jockey Robby Albarado, Purely a Dream opened up a 3 length lead midstretch through 7f in 1:23.83, and cruised to a 2 length win over late-running 9-1 Awesome Boss in 1:37.40. It was another 1/2 length back to Darkwingsoverdubai third, while Delphinia checked in 11th beaten 31 1/4 lengths. 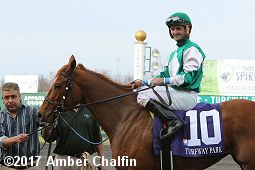 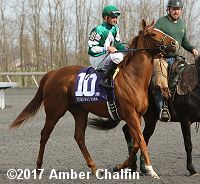 Left: Purely a Dream in the winner's circle. Winnng jockey Robby Albarado said, "She was a little hot in the post parade, which was a concern, she had been off a while. She galloped along the first turn, squeezed into contention and then made the lead. I just kept on going at that point. She held off some nice fillies. It's funny how she was foaled on this day, the 25th [of March 2014]."

Right: Purely a Dream in the post parade. Purely a Dream is owned by Living the Dream Racing 2015 LLC. Bred in Kentucky by James Bredin, she is by Pure Prize out of the Bachelor Duke mare Yorksters Girl (IRE).  Her record stands now at 2-1-0 in four starts for purse earnings of $105,952. 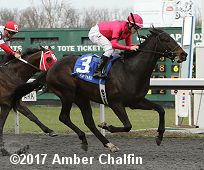 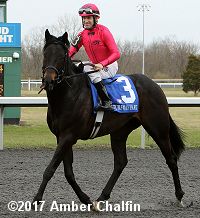 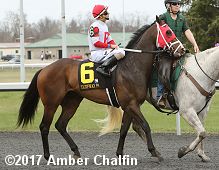 Left: Montu returns after the race. Winning jockey Rodney Prescott said, "When we hit the 3/8 pole I was pretty confident. He got an easy lead and he relaxed, once he got the easy lead. He kind of worried me turning for home. I had to ask him and was waiting a little bit. He didn't really kick until that horse [Capture the Glory] came up to him."