The feature race on the first Sunday of the Keeneland fall meet is the $500,000 Juddmonte Spinster Stakes (G1), a Breeders' Cup "Win and You're In" qualifier for the Distaff. A field of 11 older fillies and mares contested this 1 1/8 mile Polytrack trip, with Ashland (G1) and American Oaks (G1) winner Emollient sent off as the 2-1 favorite off an 8th place finish in the Garden City (G1). In to challenge her included 7-2 second choice Byrama, 7th in the Pacific Classic (G1) last out, and 6-1 third choice On Fire Baby, fourth in the Personal Ensign (G1). 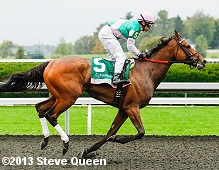 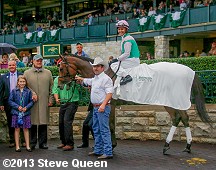 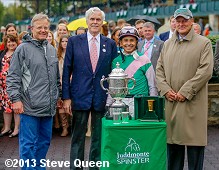 Left: Emollient in the winner's circle. Trainer Bill Mott said, "It was reminiscent of a couple of her past races where she’s taken herself back a little; she hasn’t broken as well as what she did in the spring. You could see we planned it (going to the front with jockey Mike Smith) tapping her on the shoulder leaving there and then we decided to go back to last. They don’t always do what you think they’re going to do, but the good thing was she came with a big run. Mike went to the alternate plan and the only thing you could do and that’s ride from where she broke and where she settled in. I guess we’ve got to do it their way once in a while."

Right: The trophy presentation with trainer Bill Mott on the far left. 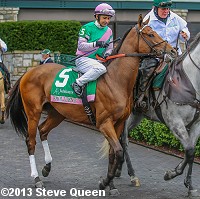 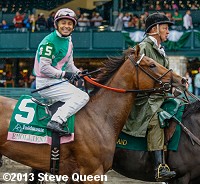 Left: Emollient heads out to the track before the race.

Right: Emollient returns after the race. Jockey Mike Smith said, "Recently for some odd reason, she has been wanting to come from out of it. The plan was if we did get away well, ride her out of there a jump or two and see where we were at. If not, sit back there and make one run. We had to go to Plan B, and it really worked. It’ll certainly keep her around a whole lot longer. At least she won’t have to do all the running on the front end and keep it going. It’s a great way to race if we can continue to do this." 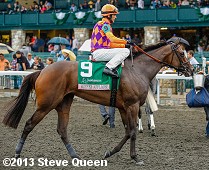 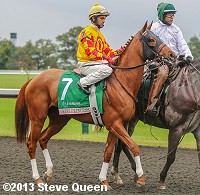 Left: Second place finisher Summer Applause returns after the race. Jockey John Velazquez said, "Perfect trip. I had her behind the speed. I was behind everybody, just (going) naturally. By the time we got to the backstretch, I was feeling the winner (Emollient) was behind me, and I was waiting, waiting, waiting until she came up to me. Finally when she came up to me, we both went. But she was a little better than me."

Right: Third place finisher Wine Princess in the post parade. Jockey Shaun Bridgmohan said, "I thought she ran hard. Steve (trainer Steve Margolis) had her in good shape. She tried all the way. She gave me everything she has. She ran pretty hard."

Immediately before the Spinster, a field of 13 two-year-olds went to post in the $150,000 Bourbon Stakes, originally scheduled at 1 1/16 miles on turf as "Win and You're In" qualifier for the Breeders' Cup Juvenile Turf, but was moved to the main Polytrack leading to the cancellation of the Breeders' Cup Challenge provision and a downgrade from Grade 3 to Listed status. Boji Moon, undefeated in 3 starts including the Kentucky Downs Juvenile last out, was the 2-1 favorite over 3-1 Bashart, winner of the With Anticipation (G2) at Saratoga, and 5-1 Medal Count, off his debut win at Ellis. 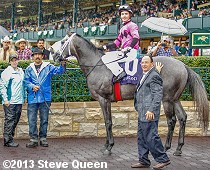 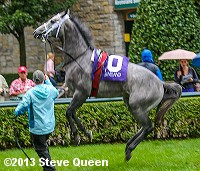 Left: Poker Player in the winner's circle. Trainer Wayne Catalano said, "I saw (jockey Channing Hill) was saving ground around the corner; everything was working out real nice. When he turned for home, he got clear right there, and I thought we had a big shot. I had two horses in the race. I was watching (School On a Hill) down on the rail. He was bottle-necked in there. I was hoping he’d get a little room, then all of a sudden here comes Poker Player on the outside getting clear running, and here we are."

Right: Poker Player acts up in the paddock. Jockey Channing Hill said, "He put me in a really good spot, just even down the backside when he broke so well. He relaxed nice into the backside. He got a little jumbled down the backside and into the turn, but he really matured even from the last race at Kentucky Downs into today. He really found himself and when I took him out I knew that we were going to be really tough to beat. He was a still a little green (early in the race), but he was absolutely professional getting to the wire." 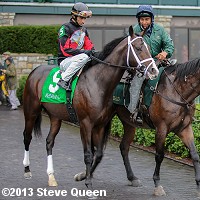 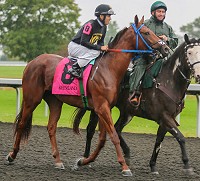 Left: Second place finisher Bashart heads out to the track before the race. Jockey John Velazquez said, "We had a decent enough trip. They kind of backed up right in my face on the backstretch and I was finally able to pull him out and tried to get him to relax behind the other two horses. Then outside, another horse made a premature move and that cost me a little bit. When he took the lead, he pulled up. He was looking out in the infield and the horse coming on the outside he didn’t even pay attention to; he just kept looking in the infield."

Right: Third place finisher Bon Accord in the post parade. Jockey Eddie Castro said, "I stayed in a little pocket. When we came into the stretch he passed some of the horses a little bit. He came on a little more at the end at the 1/8 pole."