The feature race on Opening Day of the Keeneland fall meet is the $400,000 Darley Alcibiades Stakes (G1), a Breeders' Cup "Win and You're In" qualifier for the Juvenile Fillies. A field of 12 2-year-old fillies went to post in this 1 1/16 mile Polytrack event, with My Conquestadory sent off as the 6-5 favorite off her debut win in the Summer Stakes (G2) at Woodbine. In to challenge her included 9-2 second choice Rosalind, third in the Pocahontas (G2) last out, and 5-1 third choice She's Offlee Good, winner of the Arlington-Washington Lassie. 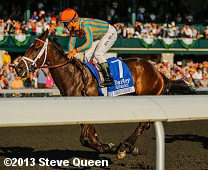 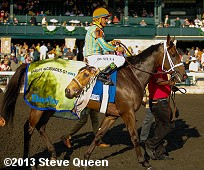 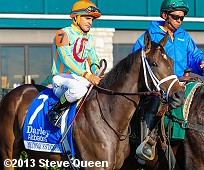 Left: My Conquestadory in the winner's circle. Trainer Mark Casse said, "A little worried? My thoughts were, 'Here we have this great filly and she's not going to be able to show how great she was.' I wasn't upset or worried for me, I was worried for her, because I wanted her to be able to show you how great she was. That was my concern. We came here because I said I wanted to get her some experience – didn't know we were going to get that much experience, but I'm glad to have it."

Right: My Conquestadory heads out for the post parade. Jockey Eurico Rosa da Silva said, "She didn't break sharp, but she was very, very relaxed. I was worried in the middle of the turn because there were so many fillies in front of me but every time I need her, she was just galloping. I was waiting for a hole, and every time it opened a little bit, I put her in. In the stretch when we had a free run, she just ran so easy. She's a very nice filly." 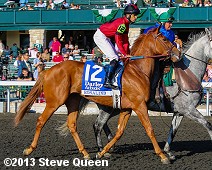 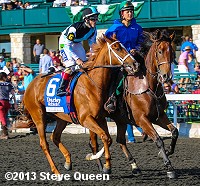 Left: Second place finisher Rosalind in the post parade. Jockey Victor Lebron said, "We had a good break, put her right in the race, and took it from there. We had a perfect trip, no excuses at all. I was expecting her to run really good. I rode her the first time, won on her, rode her in the stakes right after the maiden. And she showed she's one of those stake horses that can compete anywhere, you know? And coming to the Polytrack I knew she would be a lot better. She ran to what I expected her to and performed to what I wanted. No complaints at all."

Right: Third place finisher Battlefield Angel in the post parade. Jockey Channing Hill said, "I thought the filly ran big. She took me there in a real good spot. She was all class today. Now I have to give the two fillies that ran by her a lot of credit, because at the top of the lane I wasn't thinking anybody could run by us the way she was running."

Kicking off the Keeneland fall stakes program is the $200,000 Stoll Keenon Ogden Phoenix Stakes (G3) at 6 furlongs on the Polytrack, and a "Win and You're In" qualifier for the Breeders' Cup Sprint. Gentlemen's Bet was sent off as the 2-1 favorite in the field of 12 off his third place finish in the Alfred Vanderbilt (G1) at Saratoga. In to challenge him included 11-2 second choice Reload, fourth in both the Jaipur at Belmont and the Mr. Prospector at Monmouth, and 7-1 third choice Go Blue or Go Home, fourth in the Play the King (G2) after winning the Highlander (G3), both at Woodbine. 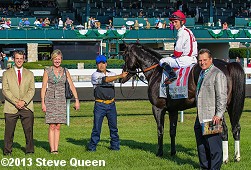 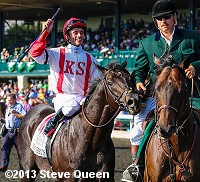 Left: Sum of the Parts in the winner's circle. Trainer Tom Amoss said, "I made a grave error with him last spring: I brought him back too quick and tried to do too much with him before I ran him, and it cost me. That's how training goes. When you make those kinds of mistakes, you're going to have to sit and wait, which is what we did and he came back really good this spring. I told the group I was with, 'This the most athletic horse I've trained. He's the quickest horse I've ever trained out of the gate.' He really showed that today. All the credit goes to the horse."

Right: Sum of the Parts returns after the race. Jockey Leandro Goncalves said, "He's very fast, he's very sharp coming out of the gate. By the first jump, second jump, I was already clear of everybody else so I just dropped in and got him to relax. That was the plan and it worked out pretty good today." 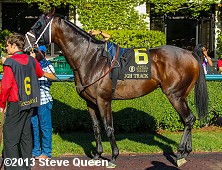 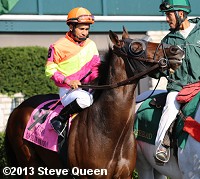 Left: Second place finisher Laugh Track in the paddock. Jockey Miguel Mena said, "He ran a very good race. He ran very hard; just bad luck in the gate. He got bumped sideways leaving there from the horse on the inside and the outside. I thought that cost me the race. He was closing fast; he just lost a little ground the first two jumps of the race."

Right: Third place finisher Go Blue Or Go Home heads out to the track before the race. Jockey Paco Lopez said, "My trip was perfect. When I came out, I took a hold and I was in good position in second. When I asked him turning for home in the stretch, my horse went in a little bit and I changed my whip (to the other hand) and he went out a little bit so I took a hold. He tried really hard." 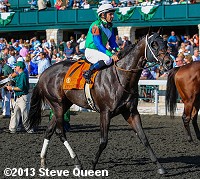 Left: Fourth place finisher and beaten favorite Gentlemen's Bet returns after the race. Jockey Mike Smith said, "He really struggled, I mean a lot. He's supposed to be a length in front and if not in front at least just right there. I was pushing to stay where I was at. I finally got him running a little bit but he just really didn’t like it, pulled up just really blowing."

Right: Down the stretch in the Stoll Keenon Ogden Phoenix Stakes with Sum of the Parts out front.