The feature race on the first Sunday of the Keeneland fall meet is the $500,000 Juddmonte Spinster Stakes (G1), a Breeders' Cup "Win and You're In" qualifier for the Ladies' Classic. A field of 10 older fillies and mares contested this 1 1/8 mile Polytrack trip, with In Lingerie sent off as the 5-2 favorite off her second place finish in the Alabama Stakes (G1). In to challenge her included 3-1 second choice Aruna, 10th in the Beverly D (G1) after finishing second in the New York Stakes (G2), and 9-2 third choice Mystical Star, 8th in the Beverly D after winning the New York Stakes. 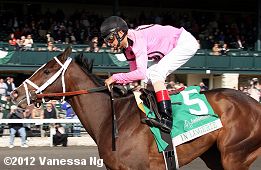 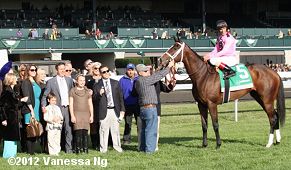 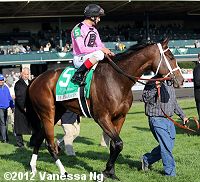 Left: In Lingerie in the winner's circle. Trainer Todd Pletcher said, "She ran very well at Saratoga against the best 3-year-old fillies in the country and we knew she liked the Polytrack. We were just hoping that she'd transfer that form from Turfway early on. We knew she was training well, so we were optimistic. I'll talk to (co-owners) Aron (Wellman) and Gary (Barber) and we'll see how she comes out of it and talk about some options. I'd say she's the kind you could look at a couple of different races with."

Right: In Lingerie heads into the winner's circle. 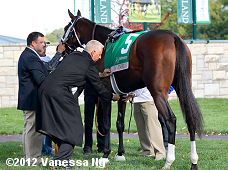 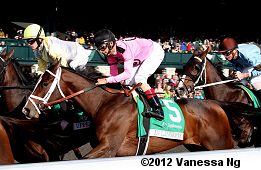 Left: In Lingerie gets saddled by trainer Todd Pletcher in the paddock.

Right: In Lingerie runs by in mid-pack first time by. Jockey John Velazquez said, "She had a perfect trip. She broke really well, so we got into nice position. I was a little worried because the horses in front of me, I was expecting they were going to come back to me. Actually they lasted a little longer than I expected, which did help me a little bit. Once I got out at the sixteenth pole and she was in the clear she responded right away. She's betting better. She's more mature and relaxed." 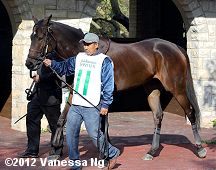 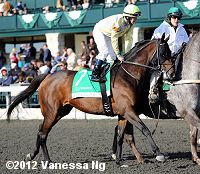 Left: Second place finisher Mystical Star in the paddock before the race. Jockey Jose Lezcano said, "My filly ran real good. The position was good. She broke running. She was comfortable the whole way. When I let her make the move, she kicked very well but the other fillies are very good fillies. I think my filly ran a good race."

Immediately before the Spinster, a field of 12 two-year-olds went 1 1/16 miles on turf in the $150,000 Bourbon Stakes (G3), a "Win and You're In" qualifier for the Breeders' Cup Juvenile Turf. With Anticipation Stakes (G2) winner Balance the Books was sent off as the 9-10 favorite over 5-1 second choice Brown Almighty, second in the Sunday Silence last out, and 7-1 Sonofasamurai, off his maiden win over the Saratoga turf.

82-1 longest shot Road Agent went to the lead first time by and he set fractions of 23.13, 47.57, and 1:13.40 over the firm course, while stalked by 38-1 Really Sharp. Entering the stretch, Road Agent tired badly allowing Really Sharp to inherit the lead. Balance the Books, last early, closed with a rush and was forced to alter course when Really Sharp bore out, but still prevailed by a nose in 1:45.15. It was another 1 1/2 lengths back to Brown Almighty third, and 2 more to Sonofasamurai fourth. After a stewards' inquiry, Really Sharp was disqualified from second to sixth for interference, moving Brown Almighty to second and Sonofasamurai to third. 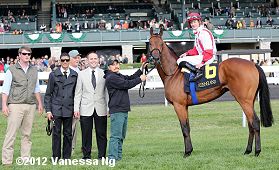 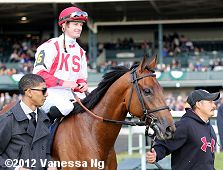 Left: Balance the Books in the winner's circle. Trainer Chad Brown said, "He's a wonderful horse, wonderful owners – Seth Klarman and Bill Lawrence. All three of this horse's races have been good. Keeneland sales grad ($160,000 at the Keeneland April Two-Year-Olds in Training Sale); got him here in the spring and brought him back here and won a stakes. It's been great. This horse is getting bigger and stronger, and it's on to the Breeders' Cup."

Right: Balance the Books after the race. Jockey Julien Leparoux said, "He's a very nice horse. He didn't break too sharp today, but he was relaxed and he made his run like he usually does." 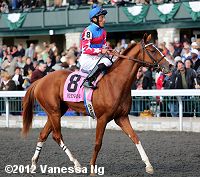 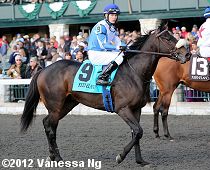 Left: Second place finisher Brown Almighty returns after the race. Jockey Francisco Torres said, "(The bumping) hindered me a lot. Inside the 1/8 pole we had dead aim on them and all of a sudden we had the room taken away from us and it stopped his momentum. He picked it up once we were clear."

Right: Third place finisher Sonofasamurai returns after the race. Jockey David Cohen said, "I think the video speaks for itself." The Ken McPeek trainee improved his record to 1 win and 2 thirds in 3 starts, earning $69,100 for owner Susan McPeek (Magdalena Racing). 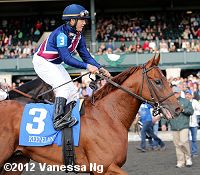 Really Sharp, who finished 2nd but was disqualified to 6th after bearing out in the stretch run, returns after the race under jockey Elvis Trujillo. The Ian Black trainee has a record of 1 win, 0 seconds, and 0 thirds in 3 starts, earning $38,081 for owners Nancy and Richard Kaster.