The feature race on Opening Day of the Keeneland fall meet is the $400,000 Darley Alcibiades Stakes (G1), a Breeders' Cup "Win and You're In" qualifier for the Grey Goose Juvenile Fillies. A full field of 14 went 1 1/16 miles, one full lap of the Polytrack on Friday afternoon, with Natalma Stakes (G2) runner-up Spring in the Air sent off as the lukewarm 4-1 favorite. In to challenge her included 9-2 second choice Magical Moon, a maiden winner by 10 lengths at Saratoga, and 5-1 third choice Kitten's Dumplings, fourth in the Natalma last out.

Jockey Jeffrey Sanchez sent 25-1 La Song to the lead immediately and she set fractions of 22.98, 47.13, and 1:37.81 while pressed by 10-1 Speedinthruthecity and Magical Moon. Entering the stretch, La Song tired allowing Magical Moon to inherit the lead, getting the mile in 1:37.81, but Spring in the Air, last out of the gate and 10th early, closed on the far outside to win by 1 length in 1:44.33. It was another 2 lengths back to Magical Moon third. 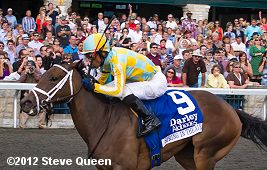 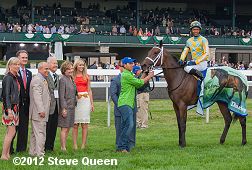 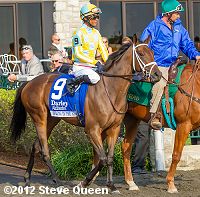 Left: Spring in the Air in the winner's circle. Winning trainer Mark Casse said, "I went to Patrick (Husbands) before the race and said, ‘What do you think,' and he said, ‘It's just a matter of how far.' He rode her confidently -- scared the hell out of me. She's just pure class. A lot of the other fillies were getting upset in the paddock but it didn't bother her at all. Patrick has ridden almost 1,000 winners for me. He had a ton of confidence in her and rode her like he did. It took that (confidence) to let her drop back that far and then make a run. She's got a pretty good surge to her when you hit the gas."

Right: Spring in the Air heads out for the post parade. Winning jockey Patrick Husbands said, "I had a good trip. I went into the race just to follow (Ramon) Dominguez because I figured his horse (Tara From the Cape) would probably take me halfway down the lane. When I reached the 1/4 pole, he had no horse so I had to get from behind him and get to the lead. From there she was a class filly. What made me laugh is an hour before the race Mark came to me and started telling me about the track. I said, ‘Stop. The only way this horse will get beat is the trainer." 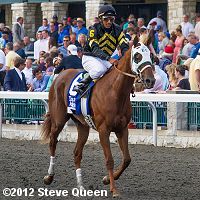 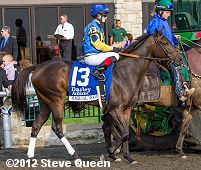 Right: Third place finisher Magical Moon heads out for the post parade. Trainer Al Stall Jr. said, "It was asking a lot of her going from 5˝ furlongs to 1 1/16 miles. She didn't settle at all early on and I think it definitely cost her in the end. She has a world of talent. We have to work on getting her to relax. She is definitely not going to the Breeders' Cup." Jockey Rosie Napravnik added, "I was really hoping she would relax for me. Even with the brutal first-quarter fractions, she really tried her heart out. I don't know that it's a matter of distance. I think she has to learn to relax."

The first stakes race of the meet is the $175,000 Stoll Keenon Ogden Phoenix Stakes (G3) at 6 furlongs on the Polytrack, and a "Win and You're In" qualifier for the Breeders' Cup Sprint. Doctor Chit was sent off as the 8-5 favorite in the field of 10 off a fourth place finish in the King's Bishop (G1) at Saratoga. Aikenite was the 7-2 second choice, unraced since finishing fourth in last year's Breeders' Cup Sprint, over 9-2 third choice Sum of the Parts, second in the Groovy Stakes at Belmont after winning the Red Legend at Charles Town.

Jockey Julien Leparoux sent Sum of the Parts to the lead exiting the chute and he set quick fractions fo 22.75 and 46.04 while pressed by Doctor Chit to his inside. At the 3/16 pole Sum of the Parts began to draw off from the tiring Doctor Chit, getting 5/8 in 57.55. 10-1 Noble's Promise, 5th early, rallied between horses but Sum of the Parts easily held him off by 1 1/4 lengths in 1:09.88. It was just a head back to 16-1 Laurie's Rocket third, while favorite Doctor Chit checked in fifth. 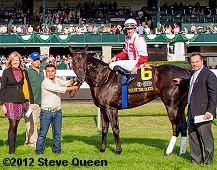 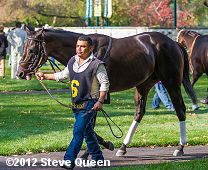 Left: Sum of the Parts in the winner's circle. Winning trainer Tom Amoss said, "I was really pleased that we made the lead as easy as we did. Julien's a great rider here at Keeneland, handled the front end well with this horse. He knows this horse well. We got beat at Belmont with this horse about 3 1/2 weeks ago (Groovy Stakes), but it probably was a blessing. It was his first start since June. I think it got him ready for this race."

Right: Sum of the Parts in the paddock before the race. Jockey Julien Leparoux said, "The plan was to break good and see what the other horses were doing on the inside of us. We wanted to be on the lead but not going crazy. I was glad to be on the lead and going easy. At the 1/4 pole, I had a lot of horse and he finished strong." 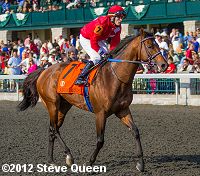 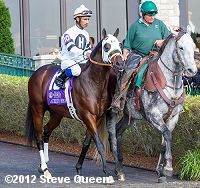 Left: Second place finisher Noble's Promise returns after the race. Trainer Ken McPeek said, "That was terrific. This horse has been nothing but a great ride. He's obviously still very competitive at this level and he's never done anything but give it everything he's got. He's a lot of fun to be around. He's going to run again and we're considering the Breeders' Cup Sprint. I just talked to (co-owner) Richard (Rigney) and he's game."