The final Sunday of the Saratoga meeting features the $250,000 Spinaway Stakes (G1), a 7 furlong sprint for 2-year-old fillies, with the Breeders' Cup Juvenile Fillies as the ultimate target for most of the participants. A field of eight went to the gate in this year's edition, with Schuylerville Stakes winner Cotton Blossom sent off as the lukewarm 2-1 favorite. Also in the field was 5-2 second choice X Star, runaway winner of her debut race at Delaware last time out, and 5-1 third choice Appealing Zophie, second in the Mountaineer Juvenile Fillies Stakes in her last start.

Appealing Zophie was quickest out of the gate and jumped ahead to a clear 2 1/2 length lead after a fast initial quarter mile of 22.38 over the wet main track rated "good". She was allowed an uncontested lead for the remainder of the backstretch, getting the half in 45.74, with X Star chasing in behind her in second. At the top of the stretch, jockey Shaun Bridgmohan loosened the reins and she pulled away from the field, extending her lead to 6 lengths at the 1/8 pole after 3/4 in 1:10.48. Favorite Cotton Blossom made a late bid through the stretch after racing in fifth early, but was too little too late as Appealing Zophie easily held her off by 5 1/4 lengths at the line, in a final time of 1:23.79. Cotton Blossom just beat X Star by a head for the place spot. 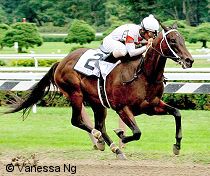 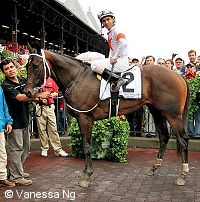 Appealing Zophie in the winner's circle. Winning trainer Scott Blasi said, "She's always been brilliant. When you can start in the 10-post at Keeneland and clear the field by three, you're fast. I thought that was very good filly that beat her at Mountaineer. We hadn't run in a long time and probably didn't have her tight enough. She's got a very good turn of foot, and I do think she'll go far. She's got the best quality you can have, and that's speed." 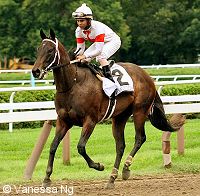 Appealing Zophie returns after the race. Winning jockey Shaun Bridgmohan said, "She is so fast. She did everything well. I was amazed at how fast she was going. She had her ears up down the backside. I knew once they were coming, she would get back into it and do some running. When I asked her at the top of the stretch to go on with her business, she did. This filly impressed me very much at Keeneland. She stumbled out of the gate, and in three strides, she was on the lead. She did everything right and won by 10 lengths going four and a half furlongs. That's very impressive." 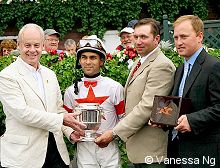 The trophy presentation for the Spinaway Stakes. 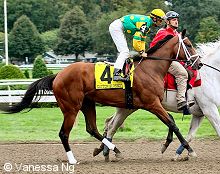 Second place finisher and beaten favorite Cotton Blossom in the post parade. Her trainer Todd Pletcher said, "Johnny (Velazquez) said she struggled with the track. With the way the track was playing today, you wanted to be lying close. It would have been nice to have more pace in there, too. I was happy wit the way she finished. Our filly ran a courageous race." Jockey John Velazquez added, "In the first eighth of a mile, she was having trouble getting her feet in the track. It seemed like she was spinning her wheels. I kept at her little by little until she was comfortable around the turn. Once I got her out, she was coming. But it was too little too late." 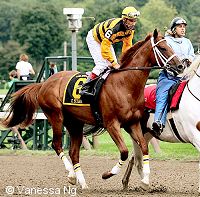 Third place finisher X Star in the post parade. Her trainer Larry Jones said, "Today, it looks like you've got to beat the track. It's been speed all day. If you come off the hook in front, then you are going to be tough. We just couldn't get in front at the hook. We'll take it. We're not going home with our tail tucked between our legs. She'll have gained a lot out of this. We'll keep focusing towards Churchill Downs (Breeders' Cup, November 4)." Jockey Mario Pino added, "She broke good. I thought I would be lying second or third. She was in a winning spot, but she was spotting a lot of experience today. With another race under her belt, she'll be even better. Going seven-eighths after just a maiden race is tough, but I just got beat for second. She just got a little tired on me."