The co-feature on the Spinaway Stakes undercard at Saratoga on Sunday afternoon is the $113,000 Saranac Stakes (G3) for 3-year-olds going 1 3/16 miles over the Mellon Turf Course. A field of nine went to the gate here, with Amigoni sent off as the lukewarm 5-2 favorite off a third place finish in the American Derby at Arlington last time out. Also in the field were 4-1 second choice French Beret, a close second in the Breeders' Stakes at Woodbine in his last start, and 6-1 third choice Desert Wheat, fourth in the American Derby.

6.60-1 fourth choice Sadler's Trick went straight to the front first time past the stands and he battled on the pace with Amigoni and 24-1 outsider Classic Pack through a quarter in 23.35 and a half in 48.33 over the "good" course. The threesome continued to lead the field into the far turn through 3/4 in 1:12.99, but they tired each other out, setting the race up for the closers. 7-1 fifth choice Devil's Preacher, who had stalked the pace in fourth the whole way, made his bid for the lead at the top of the stretch, and got his head in front with a furlong to go. However, 9-1 Rock Lobster, well back early, had found room on the outside after saving ground early, and closed steadily to wear down Devil's Preacher to prevail by just a neck in a time of 1:57.36. It was 1 1/2 lengths back to 22-1 outsider Murch in third. Favorite Amigoni faded after a mile and finished eighth, 9 1/2 lengths ahead of French Beret who was last. 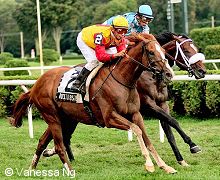 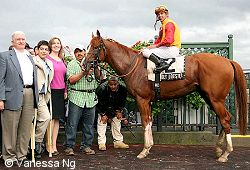 Rock Lobster in the winner's circle. Winning owners Daniel and Louis Milazzo said, "We've been rained off for the last five times. We wanted to run before something happens, like the Kent (at Delaware Park) getting rained off. This race was available and we ran here. He had been training at the farm on different types of tracks. Michael (Dickinson, trainer) has a yielding, soft ground whenever you want. In the Colonial Turf Cup (June 24), he just got a bad start and lost touch with the field. You can put a black line through that race. We wanted to keep him with three-year-olds. Why go against older horses until you have to?" 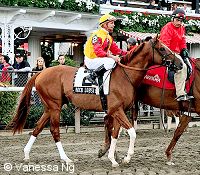 Rock Lobster in the post parade before the race. Winning jockey Eibar Coa said, "I was saving ground and the horses in front of me were slowing down. I had to stop a little on him, and he jumped up and overreacted. When I was able to straighten him out and get him outside of horses, he just took off." 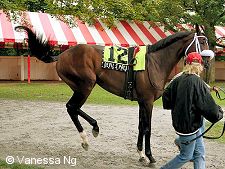 Second place finisher Devil's Preacher seems to have a bit of the devil in him as he acts up in the paddock. 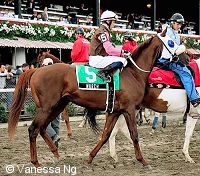 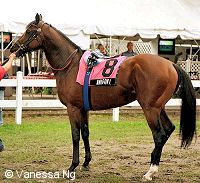 Eighth place finisher and beaten favorite Amigoni in the paddock. His jockey Cornelio Velasquez said, "He was never comfortable in the race. He never settled for me. At the three-eighths pole, he just didn't try. The track was soft and deep, and that didn't help. But he just never tried."