The 47th annual Sovereign Awards, saluting outstanding achievement in Canadian Thoroughbred racing and breeding in 2021, were handed out at a ceremony on Thursday evening at Universal EventSpace in Vaughan, Ontario, north of Woodbine Racetrack. Unlike their U.S. equivalent, the Eclipse Awards, horses must have started at least 3 times in Canada to qualify (2 for juveniles). Winning connections are presented with a trophy which is a replica of English racing great St. Simon, with Woodbine television personality and Jason Portuondo serving as master of ceremonies. Thankfully, speeches about politics or industry issues were mostly avoided, with a mostly positive tone to the festivities and optimism for the upcoming Canadian racing season, given that the last 2 Sovereign Awards ceremonies were cancelled and replaced with livestream "reveals" of the winners, and that the 2022 season will start on time (this Saturday) and without masks and restricted attendance.

Mighty Heart, the one-eyed 2020 Queen's Plate winner and 2020 Horse of the Year who continued his winning ways in 2021, easily won the Older Male Main Track award by a margin of 108-60 over Pink Lloyd, and then closed out the evening by taking Horse of the Year honours again by a 63-55 margin, also over Pink Lloyd. Owner-breeder Lawrence Cordes spoke proudly of shipping Mighty Heart to Churchill Downs for the Blame Stakes, where he pulled off an upset, ignored by the bettors and sent off at 13-1. Back home at Woodbine he won the Dominion Day (G3) and the Autumn Stakes (G3) to cap off a second championship season with a record of 3 wins, 2 seconds, and 2 thirds in 8 starts, earning $377,361. Cordes said Mighty Heart will race this year.

Ivan Dalos was given the E.P. Taylor Award of Merit, a lifetime achievement award. The native of Hungary came to Canada in the 1950's and, after being introduced to the sport of racing by a co-worker, eventually got into owning and breeding as Tall Oaks Farm. In 1998, Victory Gallop, the first foal of his broodmare Victorious Lil, upset Real Quiet in the Belmont Stakes to spoil a Triple Crown. An hour after he accepted the Award of Merit, his homebred Avie's Empire was named Outstanding Broodmare, nosing out Include Katherine by just one vote. Avie's Empire, a daughter of Grade 1 winner Fly For Avie, never raced but went on to produce Avie's Flatter (second in the voting in both Male Sprinter and Male Turf Horse categories), Avie's Mineshaft, and Avie's Mesa. As of the end of 2021 she had 3 starters, 3 winners, 1 champion, and total progeny earnings of $1,430,306.

Pink Lloyd was sent to LongRun Thoroughbred Retirement at the end of 2021, and despite losing two awards (Older Male and Horse of the Year) to Mighty Heart, did take the Champion Male Sprinter award an unprecedented fifth year in a row, with 117 votes over Avie's Flatter's 57. At the age of 9 he won his last three career starts: the Bold Venture (G3), Ontario Jockey Club Stakes, and Kennedy Road (G2), after finishing second twice to start the season. Trainer Bob Tiller spoke at length about what Pink Lloyd means to him and the industry. He is the only horse to win a Sovereign Award 5 years in a row from ages 5 to 9, and Tiller said they could have run again but he has earned his retirement. He left the track with a lifetime record of 29 wins, 3 seconds, and 2 thirds in 38 starts, earning $1,885,584.

The Outstanding Breeder award went to Sam-Son Farm, but noted as a bittersweet one by Lisa Balaz, daughter of the late Tammy Samuel-Balaz who accepted the award. The family operation started by Ernie Samuel is winding down operations, so their red and gold silks won't be seen much longer, but their legacy will continue for some time, including in the upcoming Triple Crown with Messier, who will attempt to be just the third Canadian-bred to win the Kentucky Derby (G1) after Northern Dancer (1964) and Sunny's Halo (1983).

Kazushi Kimura, the Outstanding Apprentice of 2018 and 2019, moved up to take the big prize, named the Outstanding Jockey for 2021 with 116 votes over Rafael Hernandez' 58. In 722 starts the Japan native had a whopping 140 wins, taking the Woodbine riding title in just his fourth season. His rides earned over $5 million, with 8 stakes wins including the Ontario Derby (G3) and Hendrie Stakes (G3). Mauricio Malvaez repeated as Outstanding Apprentice, beating out Michael David 136-59. Malvaez, from Edmonton, won 28 out of 252 starts earning $470,225 including the Canadian Juvenile Stakes at Century Mile.

Amalfi Coast finally broke through on awards night, taking the Champion Female Sprinter award by a 116-60 margin over Our Secret Agent. The Kevin Attard trainee won 2 graded stakes in 5 starts, the Ontario Fashion (G3) and Royal North (G2), earning $246,763 on the year. However, she didn't sweep both her nominations, as in the Turf Female category, California invader and Brazilian-bred Jolie Olimpica won by a 92-56 score. The Josie Carroll trainee had just 1 win in 5 starts, the Nassau Stakes (G2).

Town Cruise took the Male Turf Horse award by a 127-62 margin over Avie's Flatter. The Brandon and Terrance Greer homebred stepped up into stakes company, finishing second in the King Edward Stakes (G2) before pulling off the upset in the Woodbine Mile (G1). However, opting not to use their "Win and You're In" berth for the Breeders' Cup Mile at Del Mar, they instead stayed home where he finished fifth in the Nearctic Stakes (G1) in a cutback in distance. He ended the season with 3 wins, in 5 starts, earning $704,953.

Vote totals for the top three finalists for all the awards along with photos for all of the equine winners are below. Votes were cast for the top three choices, 4 points for first, 2 for second, and 1 for third, in each category by voters and the top point getters were named the finalists. The voters are individuals serving in industry positions such as senior racing officials, racing journalists and commentators, as well as provincial representatives of the Breeding and Horsemen's organizations. The judging for the 2021 media categories was performed by media professionals in the Thoroughbred Racing industry, a change from past years when they were judged by professors at nearby Humber College. 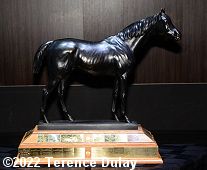