Jockey Juan Verenzuela sent War Lord to the lead and he set fractions of 25.14 and 47.88 over the good turf while pressed by Silver and Gold. Entering the lane, the pacesetters tired as Zac Spirit moved up from 5th to gain the lead through 3/4 in 1:11.91. Stepitup, 6th early, rallied late to gain the lead at the 1/8 pole and was all out to hold off late-running Super Ninetyseven, completing the trip in 1:34.70. It was another 2 3/4 lengths back to Bendicion third. 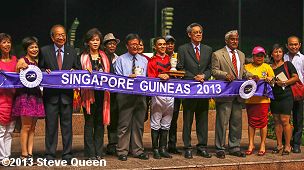 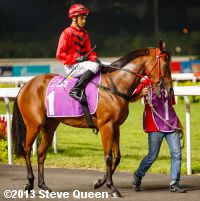 Left: The winner's circle celebration for the Singapore Guineas. Winning trainer Sonny Yeoh said, "It's nice to win a Group 1 race and so early in my career. Training carries on the family tradition. Winning this race is better than I can expect. When I started training I didn't expect this but I'm very happy to take it. I've got to thank the owners and the staff in the stable. Without their support I would not be here. (The wound on the leg, seen in the winner's circle) doesn't look too bad at the moment. I asked the vets to have a look at it but we'll know a bit more in the morning. Anyway he's going for a break. For such a small horse he's done a great job."

Right: Stepitup in the post parade. Jockey Ivaldo Santana said, "He's the best horse I've ever ridden, even including Brazil. He's a small horse, but he always tries his best. The pace was not very fast down the back, from the 1000m to the 500m mark, but my horse was always comfortable and travelling well. I just waited for the home straight and he gave his usual kick in the home straight. At the 200m, I was confident I would win as I was already well clear, even though I could feel (Super Ninetyseven) coming from behind. I am not sure what the trainer has in mind for him, but he can definitely race over more ground." 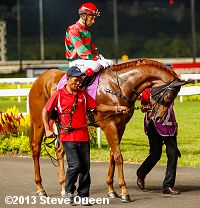 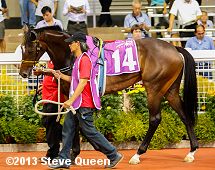 Left: Second place finisher and beaten favorite Super Ninetyseven in the post parade. Jockey Joao Moreira said, "This horse is just so immature. He just didn't respond to what I asked of him, especially in the back straight, he always did the opposite. I wanted to be closer to the pace, but he wanted to be behind. I couldn't get him into the clear, but when he did, he again went against me, ducking in when I wanted him to come out after Stepitup. Even though he was closing in fast, I knew he couldn't catch the winner as he was again very unruly and going all over the place. He's got so much ability, but we'll need to correct this if he wants to win a Group race one day."

Right: Third place finisher Bendicion in the paddock before the race.

Kicking off the stakes action on Singapore International weekend was the S$490,000 ($390,265 U.S.) Aushorse Golden Horseshoe Stakes for 2-year-olds sprinting 6 furlongs on the turf. War Affair was sent off as the 6-5 favorite in the field of 16 over 5-2 second choice Peace No War and 5-1 third choice Rikioh.

Super Bonus and Tashi battled for the early lead through an opening quarter of 24.03. On the far turn, Super Bonus tired as Tashi inherited the lead with Peace No War giving chase, getting the half in 47.11. War Affair, who had been 9th early, rallied to gain the lead at the 1/8 pole through 5/8 in 58.61, and drew off to win by 2 lengths over Silver Dollar in 1:09.99. It was another 2 1/4 lengths back to Mexborough Boy third. 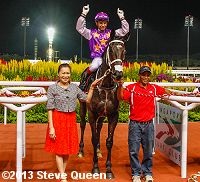 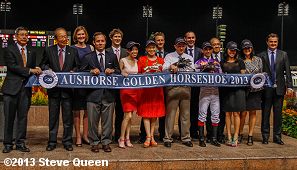 Left: War Affair in the winner's circle. Winning trainer Mark Walker said, "He's a pretty exciting horse. He's kept improving with age and he's got an exciting future in Singapore," said Walker. "Being by O'Reilly, who is a great sire, I think he'll go over more ground here. Two runs ago, he probably needed the run as he was not quite mature as an individual. He's a big scopy sort and whatever he does now, he will improve for sure. Regardless of how he went tonight, he will have two weeks out and I will the map out a program for him."

Right: Trophy presentation. Winning jockey Joao Moreira said, "Things just panned out beautifully for him. He just put himself out there and all I had to do was keep him out of trouble. I could have been a little closer to the pace and he would still have won. It was good to be there, give him a chance to learn how to run between runners. At his first start, he was very green, but credit to Mark for having brought him to his best in the last two runs. This is a very promising horse with a bright future here, especially if we step him up in distance."