The first graded stakes event on Arlington Million day is the $400,000 Secretariat Stakes (G1), featuring 3-year-olds going the Million distance of 1 1/4 miles over the Arlington Park turf. Tizdejavu was sent off as the even-money favorite in the field of nine, coming into the race off three straight wins, in the Crown Royal American Turf and Jefferson Cup at Churchill Downs, and then the American Derby at Arlington, the major local prep for this race. In to challenge the son of Tiznow included 5-2 second choice and IEAH Stables colorbearer Plan, winner of the International Stakes at the Curragh last time out, and 7-1 third choice Winchester, also shipping in from Ireland for trainer Dermot Weld, where he was 7th in the Irish Derby in his last start.

Tizdejavu took over the lead first time past the stands and was allowed an uncontested lead of as many as 2 1/2 lengths while setting easy fractions of 25.38, 49.64, 1:13.84, and 1:37.39 over the firm turf course. 30-1 Sr. Henry and 10-1 Secret Getaway, and Winchester stayed just off the pace down the backstretch. Turning for home, new jockey Rene Douglas moved Winchester out wide for the drive, and the son of Theatrical responded when asked, surging ahead of Tizdejavu at the 1/4 pole and opening up a 2 length lead in mid-stretch. Plan, who raced in fifth the whole way, rallied well through the lane but Winchester was long gone, cruising under the line 7 1/4 lengths in front in a time of 2:01.76. It was another 2 1/2 lengths back from Plan to pacesetting favorite Tizdejavu third. 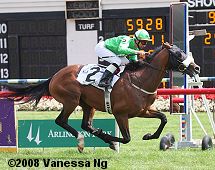 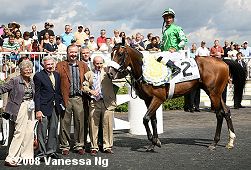 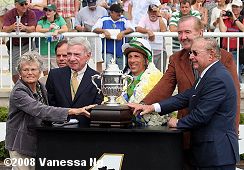 Left: Winchester in the winner's circle with owners Mr. and Mrs. Bertram Firestone on the left and trainer Dermot Weld next to them in the brown jacket. Weld said, "I put the blinkers on him and that helped. Rene has beat me a couple of times in other races so when I had the chance to get him on this horse so I took it. Don’t be surprised if you see him back for the Breeders’ Cup Turf. The horse will be going back to Ireland and will have there before going to Santa Anita." 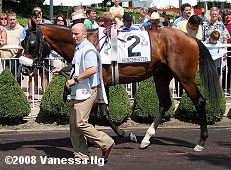 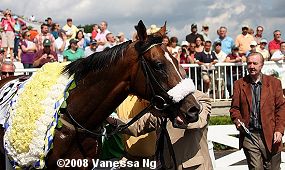 Left: Winchester in the paddock before the race. His jockey Rene Douglas said, "I had no idea about this horse. I watched his races and I know Dermot Weld is one of the top trainers in Europe. He told me he liked this horse and that was good enough for me. I didn't want to move too early. I took a couple looks back, didn't see anybody, and I said, 'Let's go.' It was going to take Secretariat to catch me."

Right: Winchester gets unsaddled after the race with trainer Dermot Weld looking on in the background on the right. 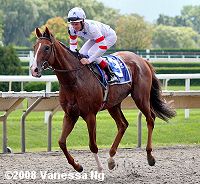 Second place finisher Plan returns after the race. His jockey John Murtagh said, "I was in a little tight around the 5/8 pole. It all opened up for me at the top of the stretch. The best has yet to come from him and she ran well today." The Aidan O'Brien trainee was making his first start for new owners IEAH Stables, and will stay in America to race under new trainer Richard Dutrow Jr. The son of Storm Cat out of champion mare Spain improved his record to 2 wins, 1 second, and 0 thirds in 5 starts with total earnings of $184,038. 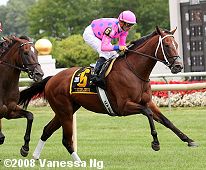 Third place finisher Tizdejavu leads first time by. His jockey Garrett Gomez said, "Everything went as planned until I had to call on him. He was dull today. He just didn't respond when I asked him. He's had a hard campaign and he's run some good races for us. Greg is going to do what is right by him and regroup a little."

His trainer Greg Fox said, "He's had a long year and didn't have quite the punch he had in previous races. Garrett thought he felt great but the last punch wasn't there. I'm sure he'll be fine. We'll probably just skip the next race cycle, he's run every month, and we'll save him for the first week in October, and hopefully regain the punch by the fall. He certainly didn't disgrace himself. The two European horses ran great. He was never able to shake free completely, maybe that softened us up a little bit early."

On to the Arlington Million won by Spirit One
On to the Beverly D. won by Mauralakana