The $750,000 Beverly D. Stakes (G1) is the distaff counterpart to the Arlington Million, with a field of nine older fillies and mares going 1 3/16 miles over the Arlington Park turf course. Precious Kitten, exiting a win in the Gamely at Hollywood Park, was sent off as the 2-1 choice over 5-2 Mauralakana, winner of three straight including the Sheepshead Bay and the New York Handicap, both at Belmont Park. Local hope Dreaming of Anna, winner of the Mint Julep Handicap at Churchill Downs in June, was the 7-2 third choice on the board.

As expected, Dreaming of Anna was quickest out of the gate and set the pace for the first lap of the course, through fractions of 24.27, 48.64, 1:12.71, and 1:37.04 under jockey Garrett Gomez while as many as 2 lengths ahead of favorite Precious Kitten who stalked her in second. Jockey Rafael Bejarano moved Precious Kitten outside for the drive and moved alongside Dreaming of Anna at the 1/8 pole. However, Mauralakana, who was fourth early, came out 4 wide into the lane and closed with a rush, passing the tiring pacesetters just outside the 1/16 pole and drew off to win by 1 1/4 lengths over late-running 13-1 Communique. It was just 3/4 length back to 54-1 Toque de Queda third. Dreaming of Anna and Precious Kitten finished fourth and fifth respectively. 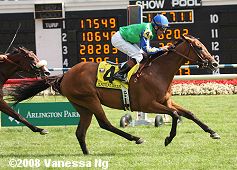 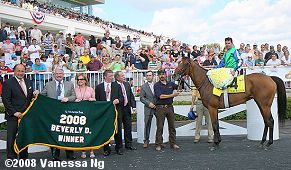 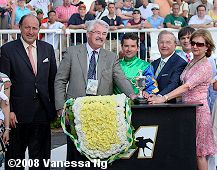 Left: Mauralakana in the winner's circle with trainer Christophe Clement on the far left holding the left end of the blanket. Clement, celebrating his record third Beverly D. winner, said, "I was a bit worried as she was two from the rail. However, she was covered up behind Precious Kitten and as long as she was covered, I thought she was going to be fine for the end. She has a spectacular turn of foot. It can be 1 1/8, 1 1/4, or 1 1/2, she can save that turn of foot and can be very competitive."

Right: The trophy presentation for the Beverly D. with owner Robert Scarborough behind the flowers. Scarborough said, "I intended to send her to stud but she has won, and won like a horse at Grade One level so Christophe will now prepare her for the Breeders' Cup meeting at Santa Anita." 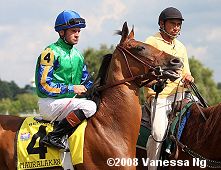 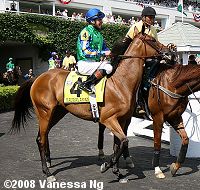 Left: Mauralakana heads out to the track before the race. Winning jockey Kent Desormeaux said, "This filly just lays it down. She gave me a lot of confidence the last couple times I rode her. You give her something to catch, and she goes and gets them. She stays in (the bit pretty good) and I was pretty confident in her turn of foot, so I wasn't worried about the ones in front of me. I just didn't want anyone coming from behind to get me." 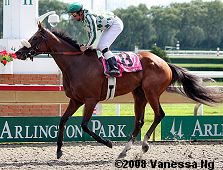 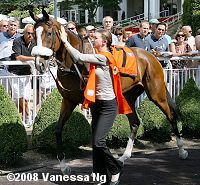 Left: Second place finisher Communique returns after the race. Her jockey Rene Douglas said, "She ran a hell of race. Everything went the way I wanted it to. I saved ground, but when the winner opened up at the top of the stretch I knew we had some running to do. The winner was beginning to back up a little to me, but it was a little too late. I'll take the second and I'm so proud of way my filly ran today."

Right: Third place finisher Toque de Queda in the paddock before the race. Her jockey John Murtagh said, "She didn't really quicken, she just lengthened. "I was bottled up on the inside and I was travelling very well but once I got out, all she did was stay on gamely and it was a good result." Her trainer Mikel Delzangles said, "She ran a good race. She was a bit caught on the inside with her big stride, but she was a fair third. Johnny rode a very good race and she is now Group One-placed which is great. She could have the E.P. Taylor Stakes (Woodbine, October 4)on her agenda." 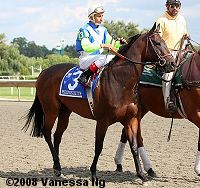 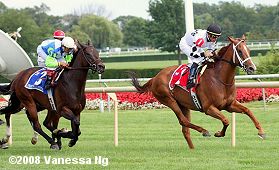 Left: Fifth place finisher and beaten favorite Precious Kitten in the post parade. Her jockey Rafael Bejarano said, "I had a perfect position and we had a very good trip. The distance just got to her. At a mile to a mile and a sixteenth, no one can beat her. She's a very good filly. She just got tired today."

Right: First time by with Dreaming of Anna, who finished fourth, out front and Precious Kitten chasing her. Dreaming of Anna's trainer Wayne Catalano said, "She ran good, she tried hard. I thought she ran a nice race. It's a little further than she wants to run. But we're at home, we were trying to win it. We got a good post, we took a shot."