Del Mar hosted two graded stakes on Saturday of Thanksgiving weekend, both contested on the Jimmy Durante Turf Course. Rain fell during most of the card, accompanied by a stiff 20 MPH wind from the Pacific and temperatures in the high 50's. The highlight event on the card was the $200,000 Seabiscuit Handicap (G2) for older horses going 1 1/16 miles on turf. The race was originally run at Hollywood Park as the Citation Handicap. Om was sent off as the 3-2 favorite in the field of 8, off three straight 2nd place finishes in the Del Mar Mile (G2), City of Hope Mile (G1), and the Breeders' Cup Turf Sprint (G1). In to challenge him included 3-1 Ring Weekend, 7th in the Breeders' Cup Mile (G1) after winning the Bernard Baruch (G2), and 4-1 Vyjack, 7th in the Breeders' Cup Dirt Mile (G1). 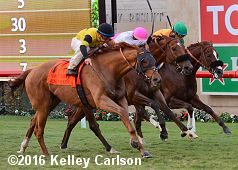 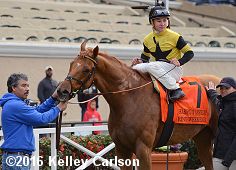 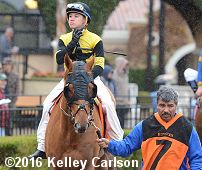 Left: Ring Weekend in the winner's circle. Winning jockey Drayden Van Dyke said, "This race set up on paper that I thought would be perfect for us. Then it played out just that way. It was sweet. We got into the lane and I let him do his thing. He was having a little trouble swapping his leads, but Graham (trainer H. Graham Motion) had told me about that and I was ready for it. About the sixteenth pole he swapped to his right lead and that gave us an extra burst. He was good. This is the first time I've won two stakes in one day. Feels good."

Right: Ring Weekend in the paddock before the race. Alice Clapham, assistant to winning trainer Graham Motion said, "I am sure it has happened for Graham to win two stakes in a day, but this is the first time I've won two (on travel assignment for him). I talked to him after the first race and he was a little worried at the time that they might call the race a no contest, but he was very happy with the way (Journey Home in the Jimmy Durante Stakes) ran. Drayden gave both our horses great rides and it worked out well." 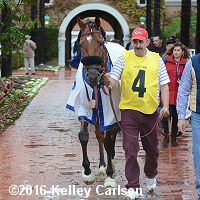 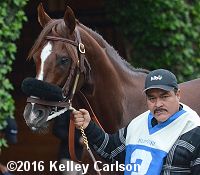 Left: Second place finisher Vyjack in the paddock before the race. Jockey Flavien Prat said, "I had a good trip and he ran well. No excuses."

Right: Third place finisher and beaten favorite Om in the paddock before the race. Jockey Gary Stevens said, "He was game. But I had a pest (What a View) with me all the way and that didn't help." 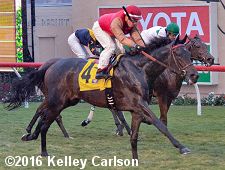 An hour before the Seabiscuit, a field of 13 two-year-old fillies contested the $100,000 Jimmy Durante Stakes (G3), a 1 mile trip around two turns of the turf. The race was originally run at Hollywood Park as the Miesque Stakes. Del Mar Juvenile Fillies Turf winner With Honors was sent off as the 2-1 favorite off her 9th place finish in the Breeders' Cup Juvenile Fillies (G1). In to challenge her included 5-2 Defiant Honor, a maiden winner in her second attempt last out at Belmont, and 8-1 Journey Home, off her debut win at Laurel. 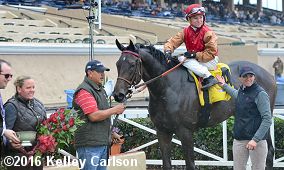 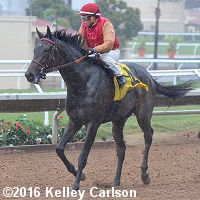 Left: Journey Home in the winner's circle. Winning jockey Drayden Van Dyke said, "Man, I had a lot of horse today. Way more horse than I could use. She was just full of run. I really couldn't ride her the way I wanted to because of the rain and wind (the track was hit by a squall at race time), but she took care of things anyway. She's a good one."

Right: Journey Home returns after the race. Alice Clapham, assistant to winning trainer Graham Motion said, "I thought Drayden rode a good race. He let her settle into the race and get her feet underneath her, waited to the top end and then she came home nicely. Everybody's always liked her but sometimes with 2-year-olds you have to wait until they're ready and the (winning debut) race at Laurel proved she was." The combination of trainer Motion and jockey Van Dyke swept both stakes on the card. 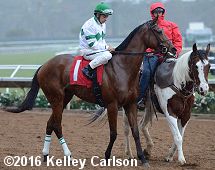 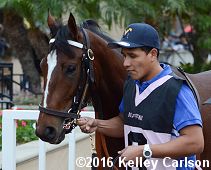 Left: Second place finisher Defiant Honor in the post parade. Jockey Gary Stevens said, "She's a nice filly. I wish I could have ridden her the way I wanted to rather than putting her on the lead like that. But that was the way it came up. She's a good one, though."

Right: Third place finisher and beaten favorite With Honors in the paddock before the race. Jockey Flavien Prat said, "She ran OK, but she just doesn't seem to be the same filly she was before. She might need a break."