Labor Day marks the end of the Del Mar summer meet. The feature race on closing day is the $300,000 Del Mar Futurity Stakes (G1) for 2-year-olds sprinting 7 furlongs on the main track. The last two winners -- American Pharoah and Nyquist -- both went on to win the Kentucky Derby (G1) 8 months later. Conditions were excellent, with 9,630 fans enjoying sunny skies and temperatures in the high 60's. Straight Fire was sent off as the 4-5 favorite in the field of 6, off his 10 1/2 length maiden romp in his second start. In to challenge him included 5-2 second choice Klimt, winner of the Best Pal (G2) and 3-1 third choice Chasing Aces, winner of his maiden at second asking last out in 5f track record time.

Jockey Kent Desormeaux sent Straight Fire to the lead exiting the chute and he set fractions of 22.33 and 44.38 while pressed by 11-1 Midnight Pleasure and stalked by Chasing Aces. Entering the lane, Chasing Aces took an awkward step was was pulled up by Tyler Baze, as Klimt, 4th early, swept to the front through 3/4 in 1:09.14. Kept to task by Rafael Bejarano, Klimt drew off to win by 4 1/4 lengths over Straight Fire in 1:21.80 over the fast main track. It was another 1 1/2 lengths back to Midnight Pleasure third. 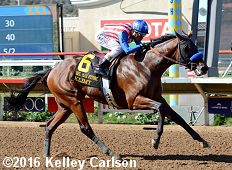 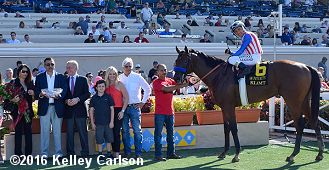 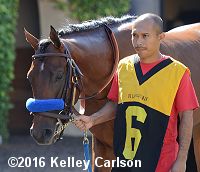 Left: Klimt in the winner's circle. Trainer Bob Baffert, celebrating his unprecedented 13th Del Mar Futurity win, said, "We've always thought that going two turns is where he's really going to excel. He's got a great mind, will sit off of horses and Bejarano rode a great race. He didn't chase anything, he just sat (off the pace), rode his own horse and showed a lot of patience. Coming to the top of the stretch, I knew he was loaded and I said 'I just hope (Straight Fire) doesn't have another gear.' It was very exciting to watch. When you're fortunate to have great clients who will buy these great horses, good things happen. Kaleem (Shah) has always wanted to have his silks in the paddock (painted on the jockey statue) and now he does." Baffert also leads all trainers with 119 Del Mar stakes wins.

Right: Klimt heads into the paddock. Winning jockey Rafael Bejarano said, "I loved my position, all the way around there. Just perfect. I could see the favorites up front going fast and that was good for me. At the 3/8, I felt I was home. I was loaded up and they'd gone fast early. My horse kicked in. Perfect." Bejarano tied with Flavien Prat for the meet's riding title, each with 38 winners. 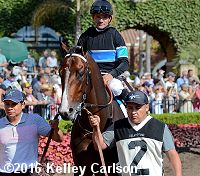 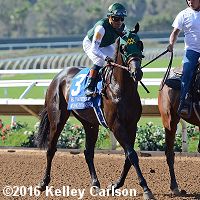 Left: Second place finisher and beaten favorite Straight Fire in the walking ring. Jockey Kent Desormeaux said, "What he did up front, he did all on his own. His ears were twitching and he was running that fast. He's the fastest 2-year-old I've ever been on. But the winner was brilliant. You've got to say that. But I'm proud of my horse. Only his third race. He's a good one."

Right: Third place finisher Midnight Pleasure in the post parade. Jockey Martin Garcia said, "He did OK. A good learning experience for him. He ran well for a horse making only his second start. And he's in there with good horses." 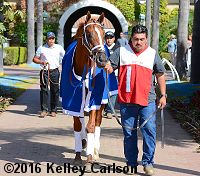 3-1 third choice Chasing Aces heads into the paddock before the race. He was pulled up at the top of the lane by jockey Tyler Baze and vanned off. Sadly, he was found to have suffered a slab fracture to his left knee and was euthanized later. Trainer Peter Miller said, "It probably happened when he ducked in. The knee slabbed and collapsed. The vets said they hadn't seen anything like that in years. The humane thing to do was put him down. I'm heartbroken, devastated."


The final stakes race of the meeting is the $100,000 Del Mar Juvenile Fillies Turf Stakes for 2-year-old fillies going 1 mile on the Jimmy Durante turf course. With Honors was the 2-1 favorite in the field of 12 over 4-1 You Missed It and 5-1 Blame It On Alphie. 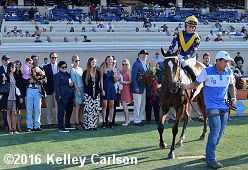 Winning trainer Keith Desormeaux said, "She's obviously a talented filly, but she's a little bit aggressive and we've got to work on getting her to relax. I was a little concerned about the outside post, bad handicapper that I am. I should have known that with her speed she could clear the horses to her inside and get a nice run into the turn. You can see that's exactly what she did. Then she actually settled pretty nicely. Good job by Flavien (Prat). We'll go to Santa Anita for the Surfer Girl and then hopefully she's ready for the (Breeders' Cup Juvenile Fillies Turf)."


Kicking off the stakes trio on closing day was the $81,990 Pirates Bounty Stakes for older horses sprinting 5 1/2 furlongs on the main track. Power Jam was sent off as the 7-5 favorite in the field of 7 over 7-2 All Run and 4-1 Kafister. 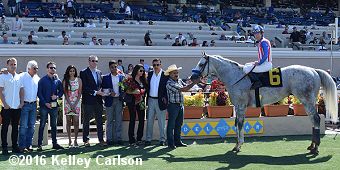 Winning trainer Bob Baffert, who finished 4th overall in the trainer standings for the meet, said, "What a way to end the meet!" Power Jam improved his record to 3 wins, 1 second, and 0 thirds in 5 starts, earning $130,240 for owner-breeder Kaleem Shah.