The highlight race on Saturday at Del Mar was the $200,000 Best Pal Stakes (G2) for two-year-olds sprinting 6 1/2 furlongs on the main track. Conditions were excellent with sunny skies and temperatures in the low 70's. Klimt was sent off as the even-money choice in the field of 6 off his 5 1/4 length maiden win at Santa Anita in his second start. In to challenge him included 2-1 second choice Big League, a debut winner over the Del Mar track, and 9-2 third choice Thirstforlife, winner of a maiden by 6 1/2 lengths after finishing third in his debut in the Kentucky Juvenile, both at Churchill Downs.

Jockey Norberto Arroyo Jr. sent Big League to the front exiting the chute and he set fractions of 23.26 and 46.03 while pressed by Klimt and stalked by Thirstforlife and 10-1 fourth choice Drafted. Entering the stretch, jockey Rafael Bejarano asked Klimt for run and the favorite moved up to gain a short lead midstretch through 3/4 in 1:09.88. Kept to task by Bejarano, Klimt drew off to win by 2 3/4 lengths over Big League in 1:16.11 over the fast main track. It was another 3 1/4 lengths backl to Thirstforlife third. 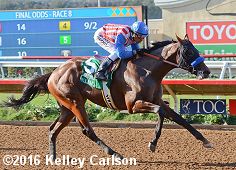 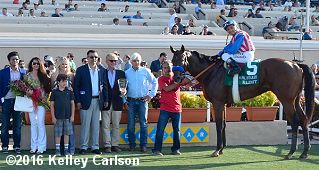 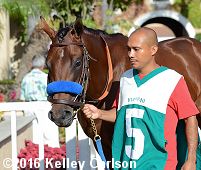 Left: Klimt in the winner's circle. Winning trainer Bob Baffert said, "I was disappointed (with his first start) and thought that maybe he's just a grass horse. But he came back, won his next one, and he's worked really well here. He's always shown that he's a horse that's going to go farther. It was a good race, they didn't go too fast. The kind of race you want to see. The Futurity is next. That's the plan."

Right: Klimt in the paddock. Winning jockey Rafael Bejarano said, "This horse is strong. He's been working so well. I've been on him in the mornings and he was working great. He relaxed for me today and finished well. The way he finished, going to six and a half (furlongs) today (after earlier races at five and five and one-half furlongs), he'll definitely run on." 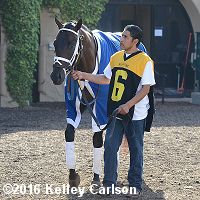 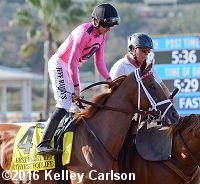 Left: Second place finisher Big League in the paddock before the race. Jockey Norberto Arroyo Jr. said, "I didn't even ask him last time (maiden victory in his first start July 30 at Del Mar). That was like a workout. I knew he'd have to face this moment today though (stiff competition) and he responded well to it. He got a little tired, but it was a good race for him. With this one under him, he'll run a lot better next time. That horse (winner Klimt) won't beat him next time."

Right: Third place finisher Thirstforlife in the post parade. Jockey Joe Talamo said, "It was a good race for him. He ran well. He'll want to run on. He showed that today."