The feature race on the Friday of Whitney weekend at Saratoga was the inaugural $750,000 Saratoga Oaks Invitational, for 3-year-old fillies going 1 3/16 miles over the Mellon turf course, the second leg of NYRA's new Turf Tiara, which started with the Belmont Oaks and ends with the Jockey Club Oaks on September 7 at Belmont. Conditions were excellent with sunny skies and temperatures in the low 80's. Concrete Rose was sent off as the 3-10 favorite in the field of 5, off wins in the Florida Oaks (G3), Edgewood (G3), and Belmont Oaks Invitational (G1). In to challenge her included 9-2 second choice Olendon, 8th in the Belmont Oaks after finishing 2nd in the Prix Saint-Alary (G1), and 6-1 third choice Happen, 6th in the Coronation Stakes (G1) at Royal Ascot. 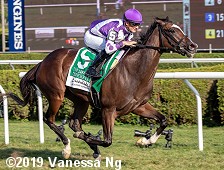 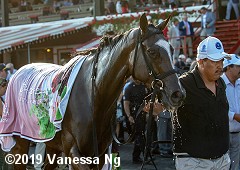 Left: Concrete Rose in the winner's circle. Winning trainer Rusty Arnold said, "It was a nice year for me to come up with a nice horse. We're excited. She's so easy. I'm just on for the ride. I was happy when they hung up a half-mile in :51 and three-quarters in [1:15.93]. She's a fast horse, and they turned it into a sprint home. She had done nothing when they hit the half-mile pole, so we were in a good spot.

Right: Concrete Rose heads back to the barn. Winning jockey Julien Leparoux said, "They gave me the race in the first part of it. We ran very slow, but she finished very strong. She's a very special filly and I'm very excited to be riding her. On paper, it didn't look like there was any speed. She's a very easy filly to ride, so I went for the lead and if someone else wanted to go, I could take back. It's one of those things where they let me go easy and that was it." 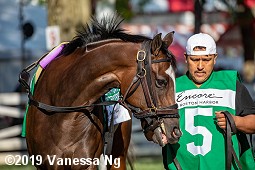 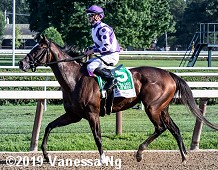 Left: Concrete Rose in the paddock. Arnold added, "She'll get one more 3-year-old race before it's over. We'll see what it's going to be. We feel good. She handled the month turnaround really well. The [Grade 1 Queen Elizabeth II Challenge Cup on October 12 at Keeneland] has always intrigued me a lot. That was the plan at the beginning of the year. However, it is going to be tough not to try to win these three races [of the Turf Tiara] the first year they have it. To win all three, that would be awful special, so there will be a lot of talking going on."

Right: Concrete Rose returns after the race. Leparoux added, "I was very confident the whole way around, and I knew she was going to kick home. I'm very happy for the connections, there's a lot of people here that love her." 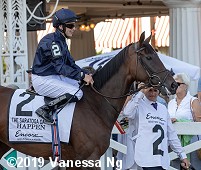 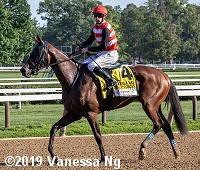 Left: Second place finisher Happen heads out to the track before the race. Jockey Wayne Lordan said, "She ran a good race, I was delighted with the way she ran. She's never that quick out of the stall, so we didn't want to change anything. I just let her find her feet. She came home nice. I think the winner is a good filly, so I was very pleased with my filly." 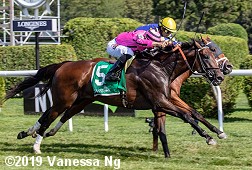 Kicking off the stakes action on Friday, the $200,000 National Museum of Racing Hall of Fame Stakes (G2) featured a field of 8 three-year-olds going 1 mile on the inner turf course. Penn Mile (G2) runner-up and Manila Stakes 3rd place finisher Casa Creed was the 2-1 favorite over 7-2 English Bee, 10th in the Belmont Derby Invitational (G1), and 4-1 Moon Colony, 9th in the Belmont Derby after winning the Penn Mile.

Jockey Jose Ortiz sent 6-1 fourth choice Award Winner to lead through fractions of 23.41 and 47.37 while pressed by 8-1 Sombeyay and stalked by Casa Creed. On the far turn, Sombeyay moved up to lead through 3/4 in 1:10.85. Entering the lane, jockey Junior Alvarado moved Casa Creed 4 wide for room and he collared Sombeyay at the 1/8 pole through 7f in 1:22.10. The pair battled the rest of the way as Casa Creed prevailed by a head in 1:33.72. It was another 1 3/4 lengths back to 9-1 Global Access third.
Results Chart 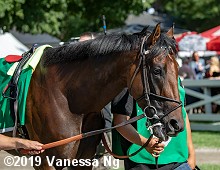 Left: Casa Creed in the winner's circle. Winning trainer Bill Mott said, "[Sombeyay] was running very game. It looked like we were going to get to him, and then he got away from us a little, but [Casa Creed] really showed us a lot of courage the entire stretch run. He was very courageous, and it looked like he gave it everything he had. We've run him pretty hard. I don't think we'll be running him back at the meet. It's probably over for him for this meet. He has given us a lot, so we'll probably give him a short little break."

Right: Casa Creed in the paddock. Winning jockey Junior Alvarado said, "I knew there were a few horses with speed. Some others didn't have that much speed, but they needed to be towards the lead, so I tried to get a good spot coming into the first turn and had luck. I had enough horse to hold myself together. I got a little worried at the three-eighths pole. I thought I had the race measured. I never thought [Somebeyay] was going to come through the rail at that point. I let the horse in front kind of go at a nice pace. Then the horse squeezed through the rail, it made things a little harder, and I had to start working a little early. But I knew turning for home that he's a fighter and he never gives up. " 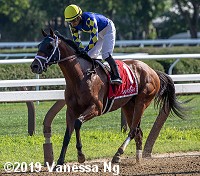 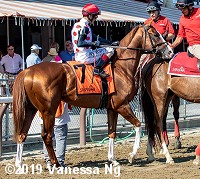 Left: Second place finisher Sombeyay returns after the race. Jockey Luis Saez said, "He tried. He ran big. When he came to the stretch, he was fine. He gave a huge effort." 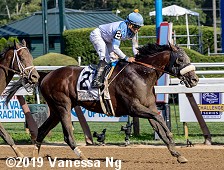 The $100,000 Alydar Stakes featured a field of 9 older horses going 1 1/8 miles on the main track. Stephen Foster (G1) third place finisher Tom's d'Etat was the even-money choice over 9-2 You're to Blame, 5th in the Brooklyn Invitational (G2), and 5-1 Candygram, second in the State Dinner Stakes. 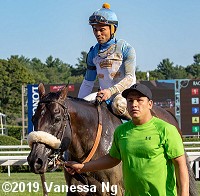 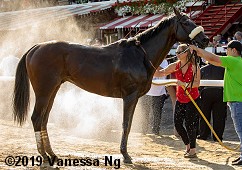 Left: Tom's d'Etat heads into the winner's circle. Winning trainer Al Stall Jr. said, "We were considering entering the Whitney, but ultimately we decided he could use some class relief and he gives us a lot to look forward to coming off this performance going forward. We kept him at Churchill to get ready for this race. He just does so well down there and doesn't need much to get acclimated. Everything just fell right into place. Joel [Rosario] got him off the fence a little bit, for him behind that fast pace and he just galloped. He galloped past those horses. Joel saved a lot of horse. It gives us a little confidence thinking about the Woodward."

Right: Tom's d'Etat gets hosed off after unsaddling. Winning jockey Joel Rosario said, "It looked like the race had a lot of speed and my horse has speed, too. I just let him break and we ended up following the leaders in the first part. They went very fast up front, but he was happy the whole time and when I called for him to go, he was there for me. He ran a good race."