On Saturday July 27th during opening weekend at Saratoga, two races for the "ladies" were contested: the Grade 2 Diana Handicap at 1 1/8 miles on the turf for the older fillies and mares, and the Grade 1 Test Stakes at 7 furlongs for the three year old fillies. Trainer Bobby Frankel and jockey Jerry Bailey did not disappoint their backers as they swept both races.

In the Diana, Bailey kept his 3.65-1 second choice Tates Creek in stalking position on the hedge for the first six furlongs. 9-1 shot Babae with Jorge Chavez rattled off fractions of 23.66, 48.60, and 1:12.72 on the front end with Snow Dance just to her inside. Then at the top of the stretch, Bailey and Tates Creek angled wide to charge to the front. Gaining a half-length lead in mid stretch, she held off the late-charging 3-2 favorite Voodoo Dancer to get the nod by the slimmest of margins, stopping the clock in 1:48.00 for the firm turf feature. Snow Dance would hold third while Babae stayed on to finish fourth. 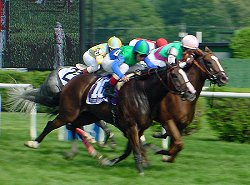 Another view of the finish from a different angle. Trainer Bobby Frankel said, "She had a real good trip. Jerry (Bailey) rode her perfect. Watching the head-bob, I wasn't sure. But when they slowed it down, it looked like she got it. Until I saw the `1' up, I wasn't that confident." 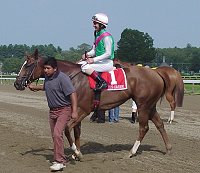 Tates Creek and jockey Jerry Bailey return after the race. Bailey said, "I didn't know if I had it. It was so close. We had a good trip. She has a few different gears, which helped. She really dug in." He has now won three of the last six Dianas, the other two being Memories of Silver (1998) and Perfect Sting (2000). 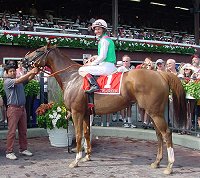 Tates Creek in the winner's circle. Frankel said, "She's a game filly. The other filly (Voodoo Dancer) got a head in front of her. For $500,000, I don't know if the word is `anxious' or `nervous.' This was her first time at 1 1/8, and she hung in there pretty tough. She should be undefeated." 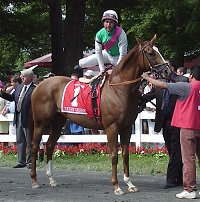 Jerry Bailey gets a leg up on Tates Creek from Bobby Frankel. This was Frankel's second consecutive Diana win. He won with Starine in 2001. 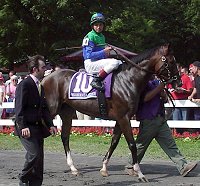 Second place finisher Voodoo Dancer with Jose Santos up. Santos said, "I thought I had it won. It was very close. It's a tough beat. I wouldn't do anything different." 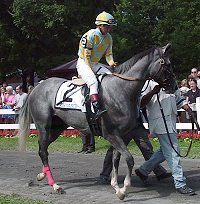 Third place finisher Snow Dance with Pat Day up. Trainer John Ward said, "She was a little more out of the bridle than usual. She finished really gamely. At the top of the stretch, it looked like she might be shuffled back to seventh. I have to try to figure out if she's matured and wants to settle back more. At least, she redeemed herself today."

An hour later, seven 3-year-old fillies faced the starter in the Test Stakes. Bobby Frankel trainee You was sent off as the prohibitive 9-10 favorite. However, she did not get the easy front-end trip like she had in her Acorn Stakes win last out. Starting sluggishly, she was last out of the gate and as far back as second-last down the backstretch as 3-1 second choice Carson Hollow set the early pace with fast fractions of 21.60, 44.27, and 1:09.68. Bailey hustled You on the far turn to split tiring horses, got to Carson Hollow in mid stretch and the pair raced as one, matching stride for stride in the final furlong. When the photo finish was posted, You had just gotten her nose on the line at the end of the furious duel, stopping the clock in 1:22.84. 14-1 longshot Spring Meadow had tracked the pace the whole way and finished third beaten four lengths, after encountering traffic trouble at the top of the stretch. 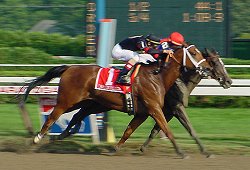 The two fillies hit the wire with You the winner on the inside by a slim margin. Trainer Bobby Frankel said, "When I watched it first, I thought she lost it. I didn't see her black nose; I just saw the other filly's head. When I saw the re-run, I thought maybe I had a chance. She had her head at the right place and Carson Hollow didn't." Losing jockey John Velazquez said, "[Carson Hollow] showed how good she really is. She was so game. That race didn't deserve a loser." 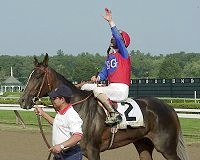 Jockey Jerry Bailey on You raises his arm in victory when the results of the photo are announced. Bailey said, "She couldn't keep up with them early. She's not a sprinter-sprinter like them. We started picking things up on the turn. There was a hole inside. I saw Chavez go for it and I beat him to it. She was so game and determined. I think being in tight like that made her fight even harder." 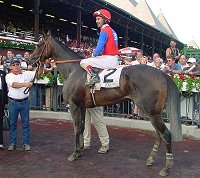 You in the winner's circle. Frankel said, "She didn't break as sharp as she usually does -- I guess coming out of those route races - and down the backside she ran up behind horses and had to steady. She ran a really courageous race. She didn't have a clear run all the way. We had to get lucky to get through, and that's what happened. I'm a lucky guy." 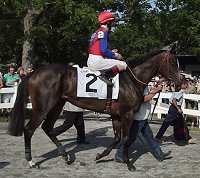 You with Jerry Bailey up in the paddock. Frankel said, "God bless Jerry Bailey. I needed him in both those stakes races (Test and Diana). You need the horses, but he helped them." You may make her next start in either the Ballerina on August 25, or the Alabama on August 17, both Grade 1 events. 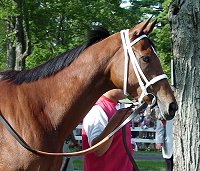 Second place finisher Carson Hollow in the paddock prior to the race. Trainer Richard Dutrow Jr. said, "She ran so big. I'm so proud of her. I thought You was going to go by on the inside, but our filly dug in so tough. She gave everything she had. I never felt so good losing a race. Bailey and Frankel are tough to beat. She ran a winning race. We've never seen her get tested before, and today she was tested." 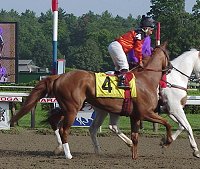 Third place finisher Spring Meadow with Jorge Chavez up in the post parade. Chavez said, "I thought my filly ran really well, despite what she went through. When we made our move at the top of the stretch, (fifth place finisher) Bold World banged into us, while You was coming up the inside. There was nowhere I could go. I couldn't do anything."