The feature race on Saturday at Santa Anita was the $200,000 Santa Monica Stakes (G2) for older fillies and mares sprinting 7 furlongs on the main track. Conditions were excellent with sunny skies and temperatures in the low 70's the 5,292 fans in attendance. Just five horses made the entry box with Hard Not to Love sent off as the 3-5 favorite off her win in the La Brea Stakes (G1). In to challenge her included 3-2 second choice Mother Mother, winner of the Kalookan Queen after finishing 2nd in the La Brea, and 7-1 third choice Lady Ninja, 2nd in the Kalookan Queen after finishing 8th in the Breeders' Cup Filly and Mare Sprint (G1).

Jockey Abel Cedillo sent Lady Ninja to the lead exiting the chute and she set fractions of 23.04 and 45.81 while pressed by Mother Mother and stalked by 28-1 Zusha. Turning for home, Hard Not to Love, last early under Mike Smith, came out 5 wide for room and swept to the lead through 3/4 in 1:10.07. Kept to task by Smith, Hard Not to Love drew off to win by 3 1/2 lengths over Mother Mother in 1:22.19. It was another 1 1/2 lengths back to Zusha third. 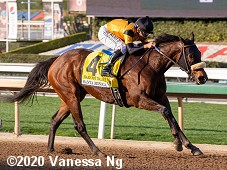 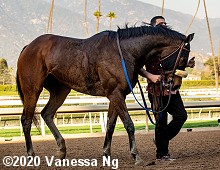 Left: Hard Not To Love in the winner's circle. Winning trainer John Shirreffs said, ôSheĺs getting better and better.á Sheĺs getting into those repeat performances.á The stewards allowed us to break from the post parade when she came out of the tunnel.á Her groom, Martin Lopez, walked her around the (Club House) turn and she stayed calm.á She never breaks, but she reacts very quickly.á Mike said he was waiting for her to relax and then he put her into the race.á I love Mike, we go back a long way and we think a lot alike.á Heĺs such a horseman, for him, itĺs all about the horse.á Thatĺs above winning or losing, itĺs always about the horse.á It looked like this was her best race.á Weĺre thinking about going into the Beholder Mile.á I think as long as she can (relax), with her style of running, it shouldnĺt be a problem."

Right: Hard Not To Love heads back to the barn after the race. The one-eyed half sister to Wonder Gadot lost her left eye in an accident as a yearling. 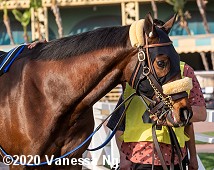 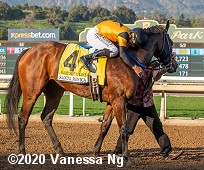 Left: Hard Not To Love in the paddock before the race. Winning jockey Mike Smith said, ôThere wasnĺt a whole lot of pace other than the filly in the one hole (Road Rager), she and the one next to me (Mother Mother) had some speed. I could have been up there as well but she has been running so well just settling off of it. It was nice to see her show her eagerness to be in the race early. It certainly made my job a whole lot easier."

Right: Hard Not To Love gets a hug after the race. Smith added, ôShe got into a really good rhythm once we passed over the gap at about the three quarter pole. She kind of put her head down and got into a really nice rhythm. I knew she was gonna run well at that point. I gotta take my hat off to John Shirreffs and everybody, the groom and the gallop girl that gets on her. She is a lot of work and they have done a lot to get her here and it is paying off." 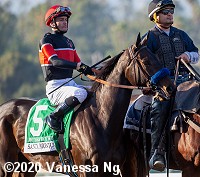 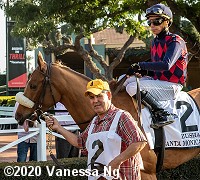 Right: Third place finisher Zusha in the paddock before the race. The Gary Mandella trainee improved her record to 2 wins, 2 seconds, and 7 thirds in 19 starts, earning $210,893 for owner Rafael Steinbruch. 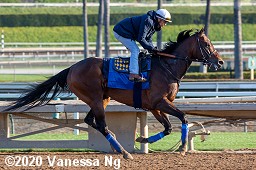 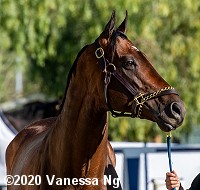 McKinzie went out for a morning gallop on Saturday after working 7f in 1:25.20 on Tuesday in preparation for the Saudi Cup. Trainer Bob Baffert said, "They ship out of here on the 18th. We're tightening the screws now. So far he looks great." McKinzie is unraced since finishing 2nd in the Breeders' Cup Classic. 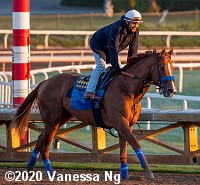 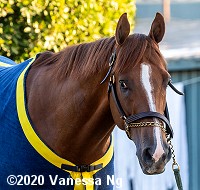 Mucho Gusto galloped on Saturday and then worked 6f in 1:11.80 on Sunday also in preparation for the Saudi Cup. Baffert said, "Mucho Gusto came out of his race great (winning the Pegasus World Cup), too."