Santa Anita's main dirt track has been closed since Tuesday, March 5, while they evaluate the safety of the surface and try to fix it. As a result, the Santa Anita Handicap (G1) card on Saturday, March 9, was cancelled, including the San Felipe Stakes (G2), which has been totally cancelled for 2019 as a result. NTRA president and CEO Alex Waldrop said, "The enhanced safety measures and protocols being undertaken by Santa Anita are among the most progressive in all of horse racing. We applaud track officials for taking these important steps which will lead to a safer racing environment for humans and equines."

Due to the closure, horses stabled at Santa Anita were limited to walking in the barn areas until the 6f training track reopened on Friday morning. Conditions were excellent during training hours Friday with sunny skies and temperatures in the mid 50's. Stronach Group CEO Tim Ritvo said, "We're looking forward to returning to normal, but it will be a new normal. The safety of our equine and human athletes remains our highest priority.  We need to work together and continue to create not only our own internal audits, but an open and honest dialogue with all of the stakeholders and evaluate best practices at other racetracks around the world." The Santa Anita Handicap will likely be moved to the Santa Anita Derby (G1) card on April 6.

Work continues on the track surface and management hopes to resume racing on Friday March 22. Ritvo added, "Everything is fluid. We're being both proactive and cautious. We want to give the horses enough time to build their fitness back up. If we don't like the way things are going, if we see some issues, we'll go an extra week [or longer]." 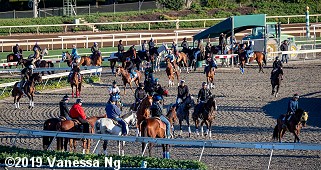 Santa Anita's one mile main track will reopen for limited training Monday morning at 5am. Training will be restricted to joggers and gallopers on Monday with 3 renovation breaks scheduled from 6am. to 6:30am, from 7:15am to 7:45am, and from 8:30am to 9am. "Over the past four days, we've been able to do a great deal in terms of amending the soil and inspecting it," said California-based trackman Dennis Moore, who has been charged with heading a group of track maintenance personnel that includes third-party experts investigating Santa Anita's main track. This group also includes representatives of the California Horse Racing Board.

"I think the most important thing with this track right now is that we closely monitor compaction levels," said Moore. "With all the rain, and this is the case in any wet winter, the 'fines,' silt and sand, can change very quickly and that affects the clays as well. Compaction, as well as dilution, of silt and sand, are all factors in the overall composition of the soil. More specifically, it's been very helpful that we have not had any significant rain since this past Wednesday. We've been able to harrow, roto-till and aerate the soil throughout each day in order to get a uniform track profile and that's helped Mick in his efforts. With all of this, the objective is to get the ideal composition throughout our six inch cushion." 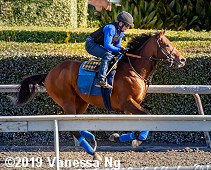 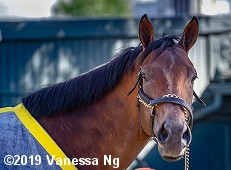 Game Winner went out for a gallop on the training track. The undefeated winner of the Breeders' Cup Juvenile (G1) is the 5-1 second choice (after the mutuel field) in Kentucky Derby Future Wager Pool 3. He was supposed to make his 3-year-old debut in the San Felipe. Trainer Bob Baffert may send him to Los Alamitos on Sunday for a timed workout, and with the cancellation of the San Felipe, he may have to go to the Rebel or the Sunland Derby. 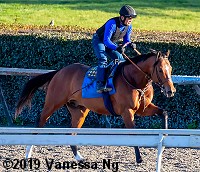 American Anthem has not raced since finishing 6th in the Bing Crosby Stakes (G1) at Del Mar in July after winning the San Carlos (G2) in June. 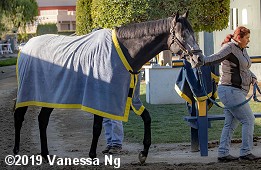 Roadster galloped on the training track on Friday. He won an allowance race at 1 mile on March 1 by 2 1/2 lengths in 1:37.53, putting him on the Triple Crown trail. Trainer Bob Baffert said, "I was relieved that we got a good race into him. We thought we had him pretty tight. He caught another gear when he turned for home. He passed the two-turn test." He will train up to the Santa Anita Derby (G1), and will need to finish in the top 2 in order to make the Kentucky Derby.