The most important race this weekend for horses aiming for the Kentucky Derby and the Triple Crown is the $300,000 Risen Star Stakes (G3) at the Fair Grounds in New Orleans. Originally, a full field of 14 three-year-olds were entered but two scratched the day before the race, leaving twelve to contest the 1 1/16 mile trip over the main track. Circular Quay, the runner-up in last year's Breeders' Cup Juvenile, was sent off as the 6-5 favorite over 3-1 Notional, shipping in from his California base after winning the San Rafael in his last start. 6-1 Zanjero rounded out the top three horses on the toteboard, off his second place finish in the Remsen last time out.

52-1 outsider Makeithapencaptain set the pace around the clubhouse turn and down the backstretch, battling with 102-1 longest shot Beta Capo through a quarter in 23.02 and a half in 46.90. Circular Quay settled near the back of the pack on a ground-saving trip along the rail, while Notional sat in eighth early, out in the 3 path avoiding traffic trouble. Turning for home, pacesetter Makeithapencaptain clipped heels with 82-1 Slew's Tizzy, causing the latter to toss his rider James Graham to the track. Zanjero put in his rally on the turn and took the lead with a furlong to go, but Notional, who had split horses on the turn, was closing well and easily passed him on the inside to win going away by 2 1/4 lengths. Imawildandcrazyguy rallied late as well to catch Zanjero for place money at the line. The running time was 1:44.18 over the fast main track. Favorite Circular Quay made his move for the lead on the turn but jockey John Velazquez had to swerve him outward at the top of the stretch to avoid the fallen jockey, causing him momentum. He did get back into stride but could only get up to fifth. Fallen jockey James Graham escaped injury and was able to ride the rest of his assignments on the card. 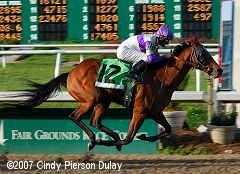 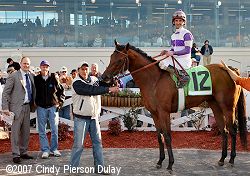 Notional in the winner's circle with trainer Doug O'Neill on the far left. O'Neill said, "Robby (Albarado) gave him a great ride. I'd like to thank my brother Dennis and Paul Reddam for picking (Notional) out. We shipped three days out, which was an acid test to see how he would handle it. To have him run the way he did is unbelievable." 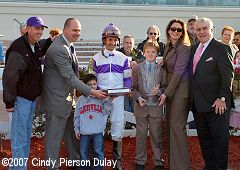 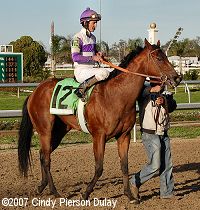 The trophy presentation with trainer Doug O'Neill in the gray suit and Risen Star's owner Ronny LeMarque on the right. (left)

Notional and Robby Albarado return after the race. (right) 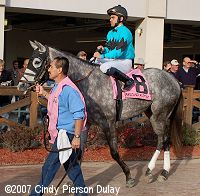 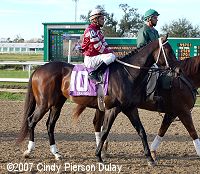 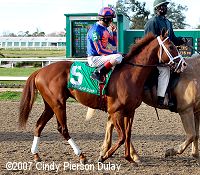 Beaten favorite and fifth place finisher Circular Quay. His Jockey John Velazquez said, "It (the spill with Slew's Tizzy) all happened right next to me. I said my prayers, I didn't go down. That's what I've got to say about this race." Trainer Todd Pletcher added, "He was flying by everybody at the end. Obviously, we were very unlucky today, but I wouldn't trade places with anybody now. There are troubled trips - but it would be hard to categorize exactly what this was today. The horse looks fine, and the Louisiana Derby would be likely."


The 3-year-old filly division competed in the $200,000 Silverbulletday Stakes (G3), also at 1 1/16 miles on the main track. Appealing Zophie was sent off as the lukewarm 2-1 favorite in the field of nine off her runner-up finish in the Delta Princess Stakes last time out. Local hope Total was the 5-2 second choice off a 3-race winning streak, with Tiffany Lass winner Get Ready Bertie the 3-1 third choice.

Jockey John Velazquez sent favorite Appealing Zophie to the front right away while off the rail, and she set a slow pace of 24.66, 48.93, and 1:13.60 while being stalked by Total to her inside the whole way. The pair continued to duel to the 1/8 pole, and then when asked by Velazquez, Appealing Zophie switched leads and shook off the stubborn Total, pulling away to win by 4 1/4 lengths in 1:44.13. It was another 1 3/4 lengths back from Total to late-running Get Ready Bertie. 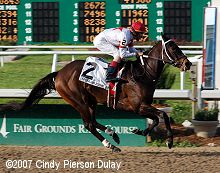 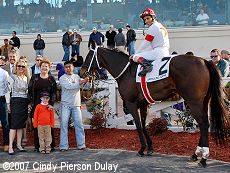 Appealing Zophie inthe winner's circle. Trainer Steve Asmussen is on the far left in the back with the beard. Asmussen said, "She's a good filly. She won a Grade 1 last year (the Spinaway). She didn't run her race at Delta. We stayed on it with her. We would have liked to run her in the Tiffany Lass, but we lost some time with her because of weather." 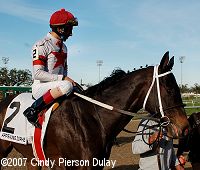 Appealing Zophie heads for the winner's circle after the Silverbulletday. Winning Jockey John Velazquez said, "It's good to be right with the other speed horse (#3, Total)and to slow it down like we did. When I hit her, she switched leads and got away from the 3." 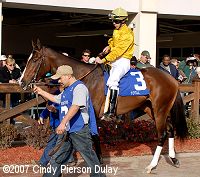 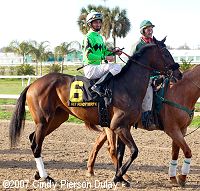 Second place finisher Total in the paddock. Her jockey Jesse Campbell said, "She ran a little green, but that may be because she never had a horse leave her like that. She got a little tired, but it was a bang-up race. I'm very proud of her." (left)