The juvenile divisions were featured on the undercard of the Cigar Mile. The 2-year-old colts competed in the $200,000 Remsen Stakes (G2), a 1 1/8 mile trip, one lap of the main track at Aqueduct. Eight were entered, with Nobiz Like Shobiz sent off as the 2-5 choice, coming off a close second place finish in the Champagne last time out, and a 10-length romp in his career debut. In to challenge the heavy favorite were 7-1 second choice Sightseeing from the powerful Phipps Stable, second in the Nashua last out after breaking his maiden at Belmont, and 9-1 third choice Zanjero, coming into this race off a two-race winning streak, in a maiden and then an allowance last out.

12-1 fifth choice Timber Reserve set the pace early on, hugging the rail through a quarter in 23.87 and a half in 47.65 while being chased by 11-1 fourth choice Marina Market. Favorite Nobiz Like Shobiz broke on top then sat back in fourth for the backstretch trip. Around the far turn, Timber Reserve continued to hold the lead by Nobiz Like Shobiz was coming up alongside him gaining with every stride, after 3/4 in 1:11.96. Nobiz Like Shobiz took over the lead at the top of the stretch and drew away to win by 6 1/2 lengths, easily holding off the late charge of Zanjero in a time of 1:48.82. It was another 1 3/4 lengths back to 20-1 outsider Kong the King in third, while Timber Reserve faded to fourth. 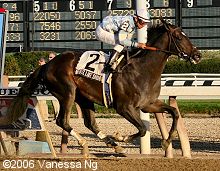 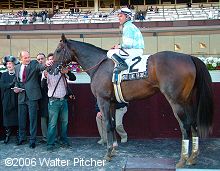 Winning trainer Barclay Tagg gives Nobiz Like Shobiz a pat on the nose in the winner's circle. He said, "I thought it was a great race. He was right there in second or third position the whole way. I thought he ran very professionally. That's what I was hoping for all along, that's why I gave him that extra month or five weeks or whatever. We worked on him a little bit. We trained him over the (Belmont Park) training track to help him work around tight turns. We felt things like that would help him mature a little bit. It looked like he was lugging in a little bit, but Cornelio said everything was fine." 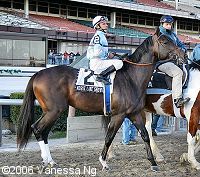 Nobiz Like Shobiz in the post parade. Winning jockey Cornelio Velasquez said, "The last part of the race, he won easily. I just had a lot of horse. I think he is the best two-year-old now. He was a little green the first couple of times, but he is getting better. He likes company and competition." 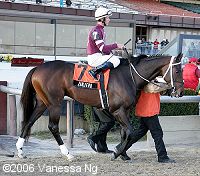 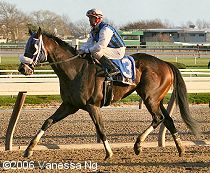 A field of nine 2-year-old fillies went to the gate in the $200,000 Demoiselle Stakes (G3), also at 1 1/8 miles on the main track. Successful Outlook was sent off as the 6-5 favorite off her win in the Tempted Stakes over the same track. Also in the field were 9-2 second choice Boca Grande, a runaway maiden winner in her last start, and 5-1 third choice Miss Goodnight, winner of the Blue Hen Stakes at Delaware Park.

Successful Outlook broke sharply out of the gate and quickly opened a clear lead down the backstretch along the rail through fractions of 23.70, 47.06, and 1:11.91 while as many as 5 1/2 lengths in front of 17-1 Rivanna River in second, who in turn was 2 lengths ahead of Boca Grande in third. Turning for home, Successful Outlook tired from her fast early pace and bore out away from the rail, allowing Boca Grande an opening to come through on the inside. Boca Grande passed the tiring favorite and took over the lead inside the 3/16 pole and drew away to win by 3 3/4 lengths over late-charging 7-1 Get Ready Bertie in 1:50.17. It was 2 1/4 lengths more back to Successful Outlook in third, who was just a neck ahead of 34-1 longest shot Grace Happens in fourth. 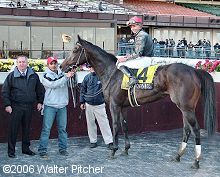 Boca Grande in the winner's circle. Winning trainer Shug McGaughey (on the left) said, "There is a lot to look forward to. We stepped her up a little bit quick, but her maiden race was a good race. She's a mile and an eighth horse, and I thought maybe the favorite might not be because of the way she's bred. Our filly loves it down inside. She cut the corner, was there and got through. She won pretty handy." McGaughey added that Boca Grande would ship down to Gulfstream Park for the winter. 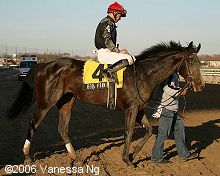 Boca Grande circles before entering the winner's circle. Winning jockey Mike Smith said, "(Get Ready Bertie) was making a good move down the backside. There was room for her to go out. I just let them all go. I wasn't quite ready to move yet. The filly stays really game when she's down inside, which is good. Most 2-year-olds, when they get down inside like that, tend to drop it. That was pretty much it. She's real nice and she'll go on." 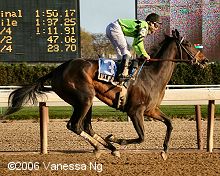 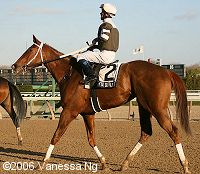 Second place finisher Get Ready Bertie runs out after the race.

Third place finisher and beaten favorite Successful Outlook returns after the race. Toby Sheet, assistant to her trainer Scot Blasi, said, "That's not where I wanted her to be. Those weren't the instructions. I'm not very pleased with that." Jockey Garrett Gomez, added, "She was a little headstrong going into the turn. I got her slowed down, then up the backstretch she was running real comfortable. At the 3/8 pole, it was just a matter of how far (she would win). When I turned for home, she just didn't go anywhere. She slowly dissipated on me and then I ran out of gas."

Back to the Cigar Mile results and photos