The final Grade 1 race of the year in New York is the $300,000 Cigar Mile (G1), a handicap for older horses going 1 mile around one turn of the Aqueduct main track. A compact but classy field of just five went to the gate in this year's renewal, with the undefeated 3-year-old Discreet Cat sent off as the heavy 1-4 favorite and making his first start against older company, as the highweight carrying 124 pounds. He won the Jerome by over 10 lengths in his last start, to go along with wins in allowance company at Saratoga and the UAE Derby in Dubai. In to challenge were last year's Breeders' Cup Sprint winner Silver Train, sent off as the 4-1 second choice making his first start since finishing a disappointing fifth in the Vosburgh. Before that race he won both the Tom Fool and the Met Mile. Breeders' Cup Mile third place finisher Badge of Silver was the 7-1 third choice, returning to dirt after making his last two starts over turf.

When the gate opened, Discreet Cat from post 4 bumped with 15-1 Sharp Humor breaking from the outside post, and then the longshot was hustled up to a clear lead by jockey Cornelio Velasquez. Sharp Humor got the initial quarter mile in a brisk 22.72 while Discreet Cat and Silver Train battled for second place 4 1/2 lengths back. At the end of the backstretch, Sharp Humor was already fading from contention as Discreet Cat cruised ahead to the lead while still being challenged by Silver Train to his inside after a half in 44.83. At the top of the stretch, Silver Train got a taste of the lead after 3/4 in 1:07.75, but Discreet Cat was just hitting his best stride. When shown the whip by jockey Garrett Gomez, Discreet Cat pulled away from the tiring Silver Train and easily held off the late charging Badge of Silver to win by 3 1/4 lengths. Badge of Silver finished a neck ahead of Silver Train, and it was a long 6 lengths back to 26-1 longest shot Dixie Meister in fourth. Sharp Humor tired badly to finish last. Discreet Cat's winning time of 1:32.46 was just 0.06 seconds slower than Easy Goer's track record set in the 1989 Gotham Stakes.

Also on the card Saturday were the Remsen and Demoiselle Stakes for the 2-year-olds. Get the results and photos for those races here. 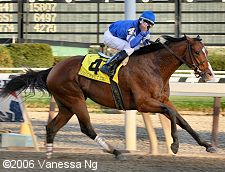 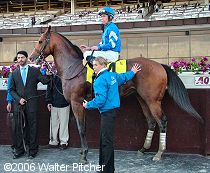 Discreet Cat in the winner's circle. He was quite fracious and didn't want to stand still for the photos. Winning trainer Saeed bin Suroor said, "The horse ran this time with older horses. This gives us confidence for the future to see if he is good enough to run in the Dubai World Cup. We'll keep out options open for next year. The horse is always improving in his races. When I saw the pace, it looked like it was really fast. The horse was sitting in nice position. I talked to the jockey before the race; he didn't need directions, really. The last two furlongs, it looked there were two horses coming close to him. But the horse has plenty of speed and class to make him win the race easy." 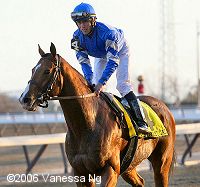 Discreet Cat returns after the race. Winning jockey Garrett Gomez said, "I wanted to be out in the clear, with him being the best horse. (Sharp Humor) was getting out pretty bad and I was stuck in the middle. Halfway up the backside, I decided to drop inside. My only concern was (Badge of Silver). I was giving up a lot of weight to the field. I guess the secretary weighted them right. I had plenty of horse in the stretch. I showed him the stick a couple of times and he went about his business. He's never been hit with it. I've been excited ever since I put a leg on him. To run as fast as they ran and the way he was doing it, he's just a nice horse." 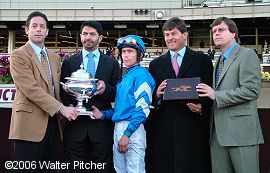 The trophy presentation for the Cigar Mile. Trainer Saeed bin Suroor (second on the left) said, "He's going to run in Dubai, maybe the Maktoum Challenge before the World Cup. There is also the Godolphin Mile, but we are looking forward to the World Cup. Next year, he will be an older horse. He'll be stronger and the distance will be fine for him. I'm sure he will improve. The way he won today was brilliant. He would be one of the best horses next year in the U.S. This is the best race he's ever run." 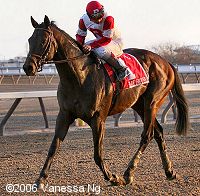 Second place finisher Badge of Silver returns after the race. His jockey Javier Castellano said, "I took advantage of the fast pace. He gave me everything he had. He really ran huge, he was just beaten by a super horse." 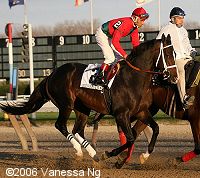 Third place finisher Silver Train in the post parade. His trainer Richard Dutrow Jr. said, "He's back on track. He ran big today. We don't have any excuses."

On to the Remsen and Demoiselle results and photos