The $200,000 Remsen Stakes (G2) features two-year-olds going 1 1/8 miles on the main track at Aqueduct. A field of 10 went to post on Saturday afternoon, with El Padrino sent off as the 5-2 favorite off a maiden win at Belmont Park. In to challenge him included 7-2 second choice Managed Account, winner of the Toccet Stakes last out, and 5-1 third choice Stephanoatsee off his maiden win at Laurel Park.

Jockey Jose Lezcano sent 8-1 Souper Speedy to the lead first time by and he set fractions of 24.38, 49.97, and 1:15.05 saving ground while pressed by 10-1 Our Entourage just to his outside, and stalked by 7-1 O'Prado Again another length behind. Entering the stretch, Souper Speedy stubbornly held the lead through 1 mile in 1:39.41, but O'Prado Again responded when asked by Kent Desormeaux and outfinished the pacesetter for a 3/4 length win in 1:52.07 over the fast track. It was just a head back to late-running favorite El Padrino third. 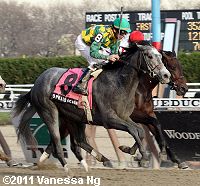 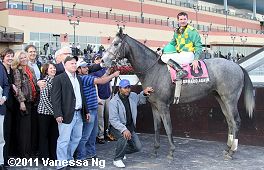 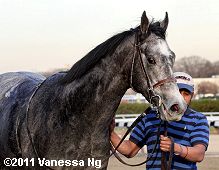 Left: O'Prado Again in the winner's circle. Trainer Dale Romans said, “The further he goes, the better he gets. We pointed to the Remsen not so much because of how he ran in his last race, but because of the way he trained into the last race and way he trained after it. The light really came on for him. He was training so well that we thought he would run a big race, so we decided to run in the Remsen. Kent rode him with a lot of confidence. He really liked him a lot too, which is why he gave up a lot of mounts in Kentucky to ride him at Aqueduct. We’ll ship him to Florida and he probably won’t race the rest of the year. We think he is a Kentucky Derby horse so we will treat him like that.”

Right: O'Prado Again heads back to the barn after the race. His jockey Kent Desormeaux said, “He’s a horse you can move into a spot and sit again, which is characteristic of a serious horse. He’s got gears. He’s silky smooth, like Fusaichi Pegasus was. You can’t tell his feet hit the ground. He’s really, really smooth.” 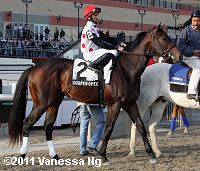 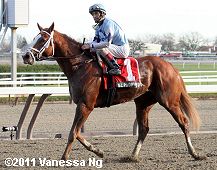 Left: Second place finisher Souper Speedy heads out for the post parade. The 8-1 shot led through the first mile under jockey Jose Lezcano, but failed to contain the winner. The Tom Albertrani trainee improved his record to 1 win and 1 second in 2 starts, earning $76,000 for owner Live Oak Plantation.


Kicking off the stakes action on Cigar Mile day was the $200,000 Demoiselle Stakes (G2) for 2-year-old fillies going 1 1/8 miles. Disposablepleasure was sent off as the 5-4 favorite in the field of 10 (9 betting interests), off a maiden win at Belmont last out. In to challenge her included the 2-horse Live Oak Plantation entry of Wee Party and Lady Cohiba, coupled in the betting at 4-1, and 5-1 third choice Wildcat's Smile, second in the Joseph A. Gimma Stakes after winning the New York Breeders' Futurity at Finger Lakes.

Entrymates Wee Party and Lady Cohiba contested the early pace with Wildcat's Smile between them through fractions fo 23.85, 48.31, and 1:13.77. Entering the lane, Disposablepleasure, who was last early, came out for room after a ground-saving trip and gained a short lead mid-stretch through 1 mile in 1:40.01. She battled with Wildcat's Smile through the final furlong, and prevailed by a nose in 1:53.10. It was another 2 3/4 lengths back to late running 32-1 Bourbonstreetgirl third. Jockey David Cohen aboard Bourbonstreetgirl claimed foul against Ramon Dominguez aboard Disposablepleasure for interference on the turn, but the objection was disallowed. 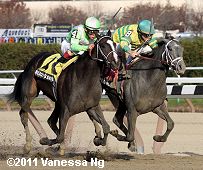 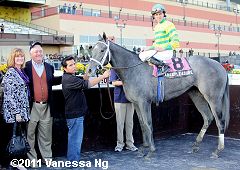 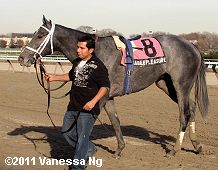 Left: Disposablepleasure in the winner's circle. Her trainer Todd Pletcher said, “The only thing I thought (when she stumbled at the start) is maybe it’s Rags to Riches again. That was bad to start with, but she really started her run on the turn, picked up some momentum, and had to stop again. It was a very courageous effort for any horse, but especially a 2-year-old filly. She’s got a lot of natural ability, but she showed she’s got some heart and desire to go along with it. For any horse to win and overcome all that first time going 1 1/8 miles was impressive, but you don’t see too many 2-year-old fillies do that.”

Right: Disposablepleasure circles during the objection. Her jockey Ramon Dominguez said, "She stumbled to her nose and got back up, and I was already concerned about her chances from there. She was taking me nicely and they were backing up in front of me, and both (David) Cohen (aboard Bourbonstreetgirl) and I went out to avoiding colliding with the fillies in front. Then I had to take a hold, go back inside, and regroup.” 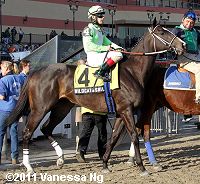 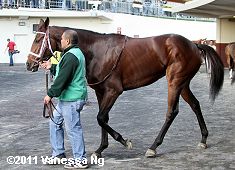