The $250,000 Cigar Mile Handicap (G1) features top older horses going 1 mile around 1 turn of the Aqueduct main track, and does have some influence on Eclipse Award voting for Older Horse and Horse of the Year. A field of just 6 (with 5 betting interests) went to post on Saturday before 7,762 fans, on a sunny Saturday afternoon with temperatures in the mid 60's. To Honor and Serve was sent off as the even-money favorite, winner of the Pennsylvania Derby (G2) before finishing a disappointing seventh in the Breeders' Cup Classic (G1) last out. In to challenge him included the Repole Stable entry of Calibrachoa and Caixa Eletronica, coupled in the betting at 5-2, and 7-2 third choice Haynesfield, winner of the Empire Classic last out at Belmont Park.

Jockey Jose Lezcano sent To Honor and Serve to the lead exiting the chute and he clicked off an opening quarter mile in 23.05 over the fast track before Calibrachoa moved up to challenge, holding a short 1/2 length lead through a half in 45.61 and 3/4 in 1:09.52. Entering the lane, To Honor and Serve regained the lead from the tiring pacesetter. 10-1 Hymn Book, last early, closed on the far outside but had too much ground to make up as To Honor and Serve cruised past the post 1 3/4 lengths in front in a time of 1:33.89. It was another 1 1/4 lengths back to Calibrachoa third. 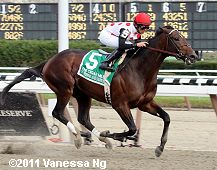 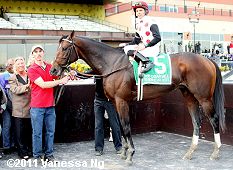 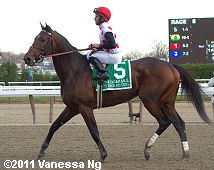 Left: To Honor and Serve in the winner's circle with owner Charlotte Weber. She said, "I thought he was professional before this race, but this certainly puts the right markings on his calendar. He's going to go home to Live Oak (Florida) and rest for a little bit. I can't see any reason not to race him next year. Having fun is what this game is all about. I don't think it's about retiring them as soon as you can to get your maximum dollars. That's nice too, don't get me wrong, but it also is about racing and continuing on and having good older horses show what they're made of with stamina."

Right: To Honor and Serve returns after the race. Winning trainer Bill Mott said, "Had he won the Classic, maybe we wouldn't have come here, but he looked like he came out of it good. It didn't look like we hurt his feelings too much in the Classic, he came back very sound and feeling good. I think (1 mile) is an ideal distance for him; I think he's a very fast horse as the 1:33 and change would indicate. He came up here and he worked well and did everything right. Actually I think he's put on a little bit of flesh since the Classic, if you could imagine that." 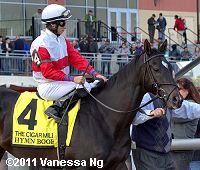 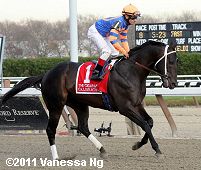 Left: Second place finisher Hymn Book in the post parade. His trainer Shug McGaughey said, ""I thought maybe there was a chance they might go a little bit quicker, especially the first quarter. I thought he ran a good race. The winner is a good horse and is a deserving winner; today, we were second-best." Jockey Alan Garcia added, "I think he wanted a little more speed, but everybody slowed down the pace. My horse was in a great spot. Mister Shug said to me 'Make one run and take your time on the backside'. He was going soft the first part and finished well."


The last Grade 1 race of the 2011 New York racing season is the $250,000 Gazelle Stakes (G1) for three-year-old fillies going 1 1/8 miles on the main track. Awesome Feather was sent off as the 3-2 favorite in the field of 8, undefeated in 7 career starts including the Le Slew Stakes at Belmont after winning last year's Breeders' Cup Juvenile Fillies (G1). In to challenge her included 9-4 second choice R Gypsy Gold, winner of the Real Prize Stakes last out, and 6-1 third choice Savvy Supreme, second in the Remington Park Oaks after winning the Monmouth Oaks (G3).

Jockey Cornelio Velasquez sent 11-1 Love and Pride to the lead immediately and she set fractions of 24.93, 48.97, amd 1:12.41 while pressed by Awesome Feather. Entering the lane, Awesome Feather took over the lead from the tiring pacesetter. 8-1 Draw It, 4th early, put in a late rally but Awesome Feather drew off to an impressive 5 1/4 length win in 1:50.01. Draw It nosed out paesetter Love and Pride for second money. 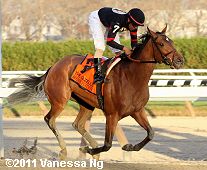 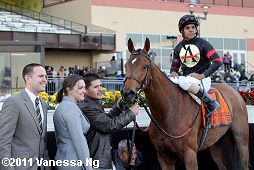 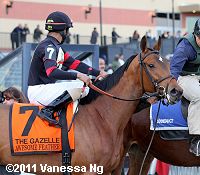 Left: Awesome Feather in the winner's circle. Winning trainer Chad Brown said, "She's got the heart of a champion. We just try to stay out of her way in the morning training her and just try to take care of her, day-to-day. She does the rest every day. It was a pretty special win. She trained so well in the morning, I'm not surprised. You just never know going to race speed, with everything she has been through, what's going to happen. But with the way she's training, it doesn't surprise me she's capable of uncorking a run like that. As long as she's 100 percent healthy, we'll probably see her in the Sunshine Millions at Gulfstream. That'd be the plan, but we're going to see how she is first, but if she's OK, that's where I'd go."

Right: Awesome Feather heads out to the track before the race. Her jockey Jeffrey Sanchez said, "She is unbelievable. When I breezed her the first time, I said, 'This is the best filly.' In Florida, when she won the first time, I told them, 'She is the best filly.' She is little, but she is unbelievable. I didn't go to the lead, I sat there, took back. At the half-mile pole, I knew I was going to win the race. I had a lot of confidence in her." 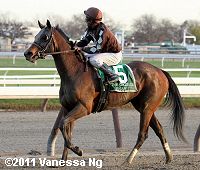 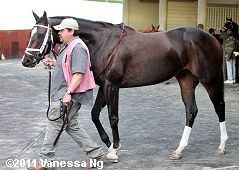 Left: Second place finisher Draw It returns after the race. The 8-1 fourth choice stalked the pace in fourth under jockey Rajiv Maragh, put in a strong rally but was no match for the winner. The Tom Albertrani trainee improved her record to 1 win, 6 seconds, and 0 thirds in 8 starts, earning $134,340 for owners David and Marylyn Randal.

Right: Third place finisher Love and Pride in the paddock before the race. The 11-1 shot set the pace under jockey Cornelio Velasquez, but tired in the final furlong to finish third. The Todd Pletcher trainee improved her record to 3 wins, 0 seconds, and 3 thirds in 7 starts, earning $157,760 for owner Green Hills Farm.

Also n the card were the Remsen and Demoiselle Stakes.