There were 5 graded stakes races at Belmont Park on Saturday afternoon, three of which were run over the 1 1/2 mile main track. Conditions were typical for mid May on Long Island, with overcast skies and temperatures in the high 60's, with the main track fast and the turf courses firm.

The $200,000 Peter Pan Stakes (G3) featured a field of 8 three-year-olds going 1 1/8 miles around one turn of the main track, in this local prep for the Belmont Stakes. Santa Anita maiden winner Set Sail was sent off as the 2-1 favorite over 11-4 second choice We the People, 7th in the Arkansas Derby, and 3-1 third choice Electability, winner of 2 allowances.

Jockey Flavien Prat sent We the People to the lead exiting the chute through fractions of 23.66, 47.24, and 1:11.25 while pressed by Electability and stalked by 33-1 Cooke Creek. Turning for home We the People opened up a 7 length advantage through 1 mile in 1:35.63, and cruised the rest of the way to win by 10 1/4 lengths over late-running 9-2 fourth choice Golden Glider in 1:48.27. It was a nose back to Electability third while favorite Set Sail checked in 6th beaten 20 1/4 lengths. 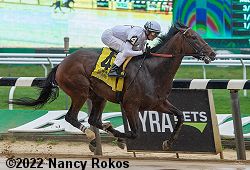 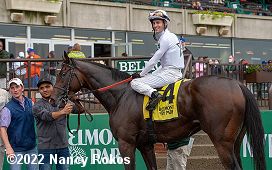 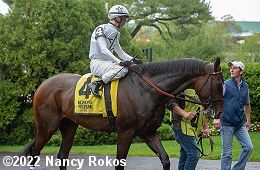 Left: We the People in the winner's circle. Winning trainer Rodolphe Brisset said, "We know how good he is, he's just his own enemy sometimes just because he's a little cocky. Today was good. He got a little warm in the paddock and we gave him a shower and you could see he kind of relaxed and was drying up. I thought the warmup was good compared to Arkansas. Obviously, We the People passed the test (to go in the Belmont."

Right: We the People heads out of the paddock. Winning jockey Flavien Prat said, "Before [the Arkansas Derby] I thought we had a good draw. Everyone broke well and all sent [for the lead] so I found myself wide and had to take back, drop in, and he didn't understand what I wanted from him from that point on. Today, he broke well and got me into the race. I wanted a clean trip and to be in the clear and see what he could do from there. He responded really well." 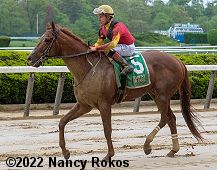 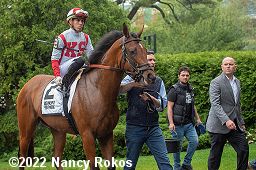 Left: Second place finisher Golden Glider returns after the race. Jockey Dylan Davis said, "I was very happy with his run. It was his first time on a sealed track and he handled it well for me. I was just bottled up inside for a little longer than I would have liked, but I liked what I saw. He really responded once I got a spot for him and opened up. He ran hard and I was happy to manage second. The winner looked like much the best. I was happy with the performance and I think he'll have a good future ahead of him."

Right: Third place finisher Electability heads out of the paddock. The Chad Brown trainee improved his record to 2 wins, 0 seconds, and 1 third in 4 starts, earning $114,100 for owner Klaravich Stables.


Kicking off the Saturday stakes quintet, the $150,000 Vagrancy Handicap (G3) featured a field of 5 older fillies and mares sprinting 6 1/2 furlongs on the main track. Breeders' Cup Filly and Mare Sprint (G1) fourth place finisher Bella Sofia was sent off as the 2-5 favorite over 3-1 second choice Frank's Rockette, second in teh Carousel at Oaklawn, and 7-1 third choice Miss Brazil, an allowance winner at Aqueduct last out.

Jockey Eric Cancel sent Miss Brazil to the front through an opening quarter of 22.67 before Bella Sofia took over on the turn under jockey Luis Saez through a half in 45.88. Frank's Rockette came out 3 wide to challenge, setting up a duel to the line through 6f in 1:09.69. Bella Sofia dug in late to prevail by a nose in 1:16.02. It was a long 9 3/4 lengths back to 20-1 longest shot Assertive Style third. 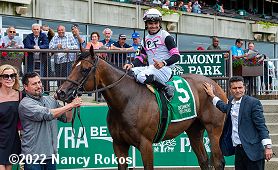 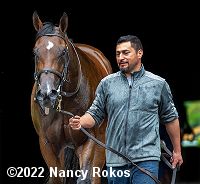 Left: Bella Sofia in the winner's circle. Winning jockey Luis Saez said, "I knew I had it. She was coming off the layoff and I didn't want to take too much from her. We knew she's a Grade 1 winner and a great filly. She did what she was supposed to do. I was a little worried about the layoff, but she proved that she can come back and she's tough. She grew more. She's bigger and she's powerful."

Right: Bella Sofia heads back to the barn. Winning owner Vincent Scuderi said, "I was a little worried about the break between three and four if she'd come back okay, but Rudy (Rodriguez, trainer) said she's back on her game, she put weight back on. We now have to make a campaign, so hopefully we'll be able to run in the Ballerina. The Breeders' Cup is the ultimate goal. We were going to go in the Bed o' Roses but Rudy said she was ready so we ran her now. We want to space her out and we have big goals for her going forward." 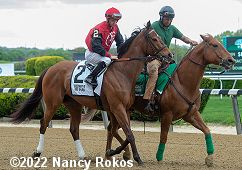 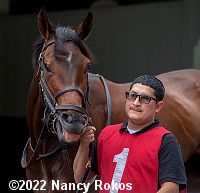 Left: Second place finisher Frank's Rockette in the post parade. Jockey Flavien Prat said, "I had a good trip. She ran really well. She was really game. When I dropped down to the inside she really gave me a good kick. I thought I was going to surprise the winner, but she just fought back."

Right: Third place finisher Assertive Style in the paddock before the race. The Thomas Morley trainee improved her record to 5 wins, 1 second, and 4 thirds in 17 starts, earning $193,814 for owner Flying P Stable.


The $150,000 Runhappy Stakes (G3) featured older horses sprinting 6 furlongs on the main track. After one scratch a short field of 5 went to post with allowance winner Repo Rocks sent off as the 9-4 favorite over two horses at 11-4, Chateau, second in the Tom Fool Handicap (G3) and Officiating, winner of the Tom Fool.

Jockey Kendrick Carmouche sent Chateau to the front through fractions of 22.61 and 45.57 while pressed by Officiating and stalked by Repo Rocks. Turning for home Chateau continued to lead by 3 1/2 lengths through 5f in 57.75 but 3-1 fourth choice Drafted, last early under Jose Ortiz, came out 6 wide and rallied late to win by a length in 1:10.84. It was another 3/4 length back to Officiating third, and 3 1/2 more to favorite Repo Rocks fourth. 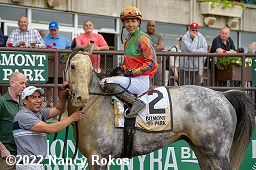 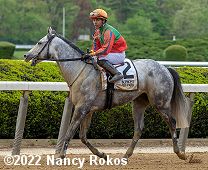 Left: Drafted in the winner's circle. Winning trainer David Duggan said, "He's pace dependent. We always though he wanted to go 7/8 because it gave him a chance if they didn't go fast enough that he'd be able to run them down. At the 3/16 pole I was a little concerned, but I knew he had momentum and dead aim on him. Jose rides him with so much confidence. He trained well going into this race and he backed up the last two [Beyer] numbers. You couldn't ask for more than that."

Right: Drafted returns after the race. Winning jockey Jose Ortiz said, "I was a little worried when the pace didn't develop like I thought. Chateau broke really well and Repo Rocks didn't, so Chateau was able to get away with an easy lead. He went fast enough, but by himself, which was good for him. I'm happy we were able to run him down. He's showing us he can compete." 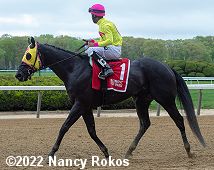 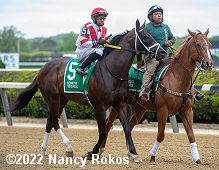 Left: Second place finisher Chateau returns after the race. Jockey kendrick Carmouche said, "He ran his race. That's his thing to let him roll. He did everything perfect. The turns over here [at Belmont compared to Aqueduct] kind of take away from us, but overall he ran his race." 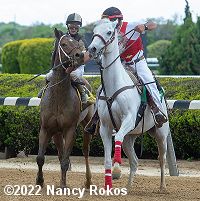 Outrider Ivan San Juan catches Answer In after his left rein broke. His left rein broke just inside the three-eighths and he went out six wide through the latter portion of the turn before going seven wide into upper stretch under a hard protective hold, got eased through the stretch and was nearing the finish when aided by the outrider inside the final seventy yards and was escorted to the wire.