There were 5 graded stakes races at Belmont Park on Saturday afternoon, two of which were run on turf. Conditions were typical for mid May on Long Island, with overcast skies and temperatures in the high 60's, with the main track fast and the turf courses firm. However late showers did downgrade the main track to "good" (sealed) for the Peter Pan, which was the last main track race of the card.

The feature race was the $700,000 Man o'War Stakes (G1), a 1 3/8 mile trip around 2 turns of the inner turf contest for older horses. After one scratch just 5 went to post with Breeders' Cup Turf (G1) winner Yibir sent off as the 1-2 favorite off second place finishes in the Dubai Sheema Classic (G1) and Betfair Jockey Club Stakes (G2). In to challenge him included 5-2 second choice Gufo, winner of the Pan American Stakes (G2) at Gulfstream, and 5-1 third choice Abaan, second in the Pan American.. 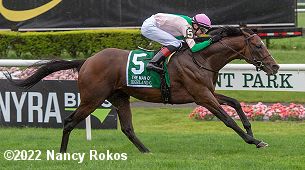 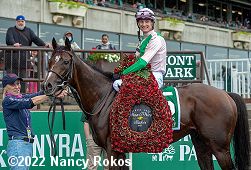 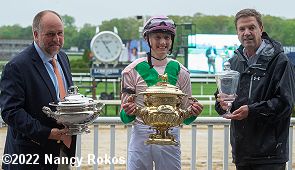 Left: Highland Chief in the winner's circle. Winning trainer Graham Motion said, " "In fairness, Alex Cole, the manager for the owners, told me that if he runs back to his European form, he's very competitive with these horses. He won a race at Ascot. That's not easy to do. Trevor had a strategy – he knew he couldn't leave him too much to do. He broke better today, which made a difference because he wasn't so held back at the start or too much ground to make up."

Right: Trophy presentation for the Man o'War Stakes. Winning jockey Trevor McCarthy, celebrating his first Grade 1 win said, "I wanted to get a good break, that was the most important thing. He broke well last time, but he just got annihilated at the break. Today, he was really handy the whole way for me. The pace was pretty slow but the whole time he was just carrying me, carrying me, carrying me. At the five-sixteenths pole I let him go and started to make an early move. I just wanted to get away from the other guys and it sure paid off. He made up a ton of ground the first time he ran in America and got shut off really bad at the break, but he made a good rally." 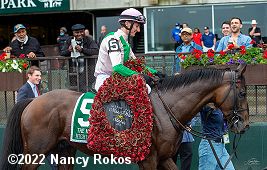 Highland Chief takes his walk down Victory Lane. Motion added, "We'd have to think about the Manhattan, but it was mentioned to go to Europe after this race if he ran well. Originally, they talked about running in the Dubai World Cup and I knew he just wasn't ready for that. [The owners] think very highly of him. (McCarthy's first Grade 1) was kind of emotional. Trevor has ridden for me since he was 16. We go back a long way." 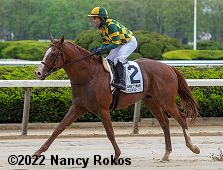 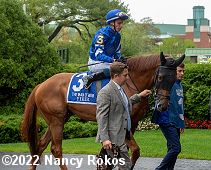 Left: Second place finisher Gufo returns after the race. Trainer Christophe Clement said, "I thought he ran a very good race. I thought he moved a little bit earlier than we wanted to in the race because Yibir (No. 3) was moving early so Joel [Rosario] did not want to be boxed in, which I understand. He ran a very game race and ran all the way to the end. I hope to go to the Manhattan. Yet again, he has to give so much weight all the time which is very frustrating. I need to think about that. There are some other races where he keeps level weight and we might go that route."

Right: Third place finisher and beaten favorite Yibir leaves the paddock. Trainer Charlie Appleby said, "That's him. He [missed the start] here last year. That's his style. He did it in the Sheema Classic as well. We intentionally not want him to be as slow out but his run style is to come off the pace. Unfortunately, we had rain here last night and rain again today and it's just on the slower side of where he likes to hear his feet rattling. For his acceleration, it just blunts it slightly. Take nothing away from the winner, he held decent form back in Europe in his 3-year-old career there and he had to be respected. We ran our race, but in an ideal world if you asked me what I'd like to have had, it would be no rain."


Closing out the Saturday stakes action was the $150,000 Beaugay Stakes (G3) featuring a field of 7 older fillies and mares going 1 1/16 miles on the inner turf course. Rougir, unraced since seventh in the Breeders' Cup Filly and Mare Turf (G1) at Del Mar, was sent off as the 3-5 favorite. In to challenge her included 9-2 second choice Lemista, unraced since third in the Beverly D (G1) at Arlington, and 11-2 third choice Plum Ali, winner of the Plenty of Grace Stakes at Aqeuduct.

Jockey Manny Franco sent Plum Ali to the lead out of the chute while pressed by 15-1 High Opinion and stalked by 17-2 Stolen Holiday and 28-1 Our Flash Drive. Turning for home, Plum Ali tired badly allowing Our Flash Drive to inherit the lead in midstretch. Rougir, last early under Flavien Prat, came out 5 wide for room and rallied by to win going away by 3 lengths in 1:43.40. It was a nose back to High Opinion third. Due to a teletimer procedural error, fractional times are unavailable and the final time was hand timed. 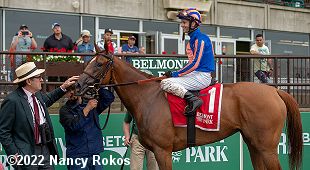 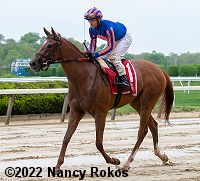 Left: Rougir in the winner's circle. Winning trainer Chad Brown said, "I was thrilled with her race. She showed a nice turn of foot that she shows us in the morning. It certainly looks like she'll stretch out fine. She's proven at a mile and a quarter previously and I think that's where she's headed. We'll take a look at running her back in the New York Handicap. There was an easy pace and such and she was still able to overcome and run well. I'm the lucky recipient of some nice fillies [owner Peter Brant] bought [in Europe]. Me and my team are very grateful for all the horses Mr. Brant sends us. It looks like we're off to a great season. This is his tenth graded win already this season."

Right: Rougir returns after the race. Winning jockey Flavien Prat said, "I had the chance down the backside and got myself outside the slow pace and it felt like it wasn't going to be any good to stay on the inside. So, I gave myself the chance to go around and it was a big help for me." 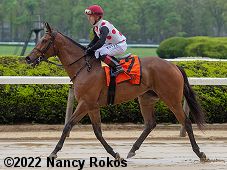 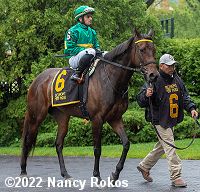 Left: Second place finisher Our Flash Drive returns after the race. Jockey Dylan Davis said, "Shane [Tripp, assistant to Mark Casse] asked me today what my thoughts were going into this. I told him that we wouldn't be able to out kick them or out close them so we'd have to put her in the game early and go from there. I loved my position – they slowed the pace down. I got into her early, thinking maybe I could get her to run away from the field before Flavien got to me. He had much the best horse, but she ran a great race and I was happy with her."

Right: Third place finisher High Opinion heads out of the paddock. Jockey Eric Cancel said, "She ran a huge race. There wasn't much speed, so I wanted her to break comfortably and get in a good spot. She was very comfortable where she was and I took advantage of it. This is the distance she likes to run, we just had to get a race into her last time. She was ready to run today."