There were 5 graded stakes races at Belmont Park on Saturday afternoon, three of which were run over the 1 1/2 mile main track. Conditions were chilly for mid May on Long Island, with overcast skies and temperatures in the low 50's, with the main track fast and the turf courses good after light rain in the morning.

The $200,000 Peter Pan Stakes (G3) featured a field of 5 three-year-olds going 1 1/8 miles around one turn of the main track, in this local prep for the Belmont Stakes. Tampa Bay Derby (G2) last place finisher Promise Keeper was sent off as the 3-2 favorite over 2-1 second choice Nova Rags, 4th in the Florida Derby (G1), and 7-2 third choice Wolfie's Dynaghost, unraced since winning his debut in November. 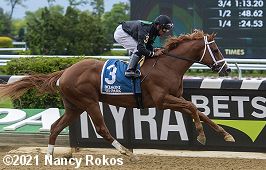 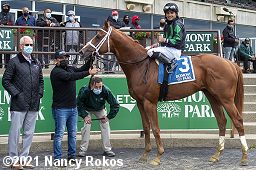 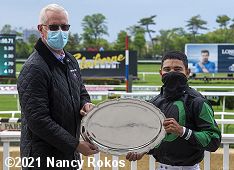 Left: Promise Keeper in the winner's circle. Winning trainer Todd Pletcher said, "He's a big mover and Luis was able to do a perfect job putting him in a stalking position and let him take advantage of the rhythmic stride he has. Luis said he had a lot of horse in the end, so that's encouraging. I thought tactically that Luis rode a smart race and put him into a good spot and got into a good rhythm. When that horse came to him, he found some more and finished up well. He's got a big bouncy, reachy stride and it seems like the further he goes, the better he gets.

Right: The trophy presentation for the Peter Pan Stakes. Winning jockey Luis Saez said, "We were working with him trying to get him into the Derby but he had a bad start that day in the Tampa Bay Derby [running 12th]. I know he's a nice horse and he's always been improving, Today, he did it so easily. He broke from the gate and found a perfect spot. When I let him go, he just took off. Last time he missed the break a little bit, but he always fights. He's a good horse to ride. He was going nice and beautifully. He can run any distance. He loves the competition, so when he felt the other horse, he gave another gear. He did it pretty easily." 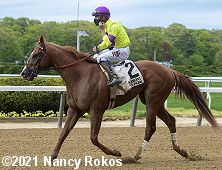 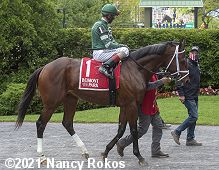 Left: Second place finisher Nova Rags returns after the race. Jockey Junior Alvarado said, "I thought he ran a great race. It was a tricky race with a five-horse field. The winner had a better trip and he kind of drew away from me at the last sixteenth. We know where we are at least with him. He's a good horse and we're going to keep trying. Hopefully, we get one sooner than later."

Right: Third place finisher Overtook heads out of the paddock. Trainer Todd Pletcher said, "He put in a decent run but probably would have benefitted from more pace."


The $150,000 Vagrancy Handicap (G3) featured a field of 5 older fillies and mares sprinting 6 1/2 furlongs on the main track. Inside Information (G2) and Hurricane Bertie (G3) winner Pacific Gale was sent off as the 3-2 favorite over 2-1 second choice Victim of Love, last year's winner and 2nd in allowance company last out, and 3-1 third choice Honor Way, 3rd in the Distaff Handicap (G3).

Jockey Kendrick Carmouche sent 5-1 fourth choice Sadie Lady to the lead through fractions of 23.01 and 46.54 while pressed by Victim of Love and stalked by Pacific Gale. Turning for home jockey Joel Rosario moved Victim of Love to the front through 3/4 in 1:10.50. Kept to task by Rosario, Victim of Love drew off late to win by 2 1/4 lengths in 1:17.27. It was a nose back to favorite Pacific Gale third. 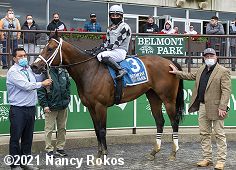 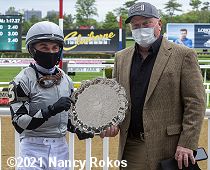 Left: Victim of Love in the winner's circle. Winning trainer Todd Beattie said, "Last year when she came here, she was a big price because she ran badly in the Nellie Morse when we tried her going longer. I tried to rate her, but she wasn't happy about that. She wants to be up there and involved early. That's her number. The distance is perfect. Six and a half or seven furlongs is ideal. She can go a mile, but not at this level."

Right: Trophy presentation for the Vagrancy Handicap.. Winning jockey Joel Rosario said, "She came home really nicely and exploded at the end and I was really proud of that effort. She put in a really nice race. She's fast and it was a very good performance. It's nice to have days like this (with 4 wins). I take it as a blessing and I'm really thankful for the trainers and owners for supporting me. It's special to have people here cheering for you and it's really exciting." 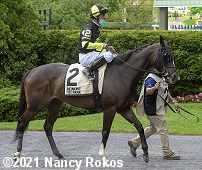 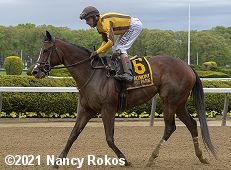 Left: Second place finisher Sadie Lady heads out of the paddock. Jockey Kendrick Carmouche said, "My horse ran wonderful. We needed just a furlong shorter. I thought the horse that won was the horse to beat."


Kicking off the Saturday stakes quintet was the $150,000 Runhappy Stakes (G3) for older horses sprinting 6 furlongs on the main track. A short field of 5 made final entry with Firenze Fire, winner of this race in 2019, sent off as the 9-10 favorite off a close second in the Mr. Prospector (G3). In to challenge him included 7-5 second choice Chateau, 4th in the Carter Handicap (G1), and 11-2 third choice Stan the Man, 5th in the Toboggan (G3)

Jockey Kendrick Carmouche sent Chateau to the front through fractions of 22.59 and 45.51 while pressed by Firenze Fire and stalked by Stan the Man. Turning for home, Firenze Fire took over the lead through 5f in 57.48. Kept to task by Irad Ortiz Jr., Firenze Fire drew off late to win by 3 1/4 lengths over Chateau in 1:09.76. It was another 3/4 length back to late-running 15-1 Town Classic third. 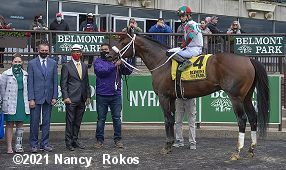 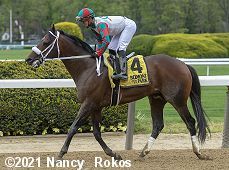 Left: Firenze Fire in the winner's circle. Winning trainer Kelly Breen said, "The horse wintered well in Florida. They took good care of him. He shipped up here and got to breeze a couple times right out of his stall. We didn't have to ship. Everything worked out to plan and it doesn't always work out that well. In the paddock, he looked very picturesque. Maybe a tad bit heavy. That happens to us when we get older. He broke well. He sat right there and ran a very professional race. [Chateau] is a nice horse and has been running well and is in form. We're coming off a layoff and I was definitely concerned about him getting away from us, but we showed up."

Right: Firenze Fire returns after the race. Winning jockey Irad Ortiz Jr. said, "I knew [Chateau] was going to go and no one else was going to be close with him, so I decided to be close and not have to be in a rush. It's only six furlongs. I didn't want to let him relax too much and then make a run from the 3/8 pole. I just let him be closer and waited as long as I could to start going. When I asked him, he responded really well. The tank was full. He kept coming and kept moving forward. He feels great. 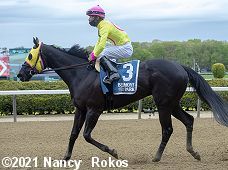 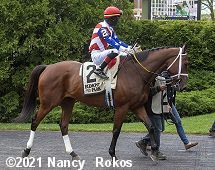 Left: Second place finisher Chateau returns after the race. Jockey Kendrick Carmouche said, "He ran his race. The best horse beat him today. My horse broke well and ran good on the surface and did well today, we just got beat."

Right: Third place finisher Town Classic heads out of the paddock before the race. The Saffie Joseph Jr. trainee improved his record to 6 wins, 20 seconds, and 10 thirds in 50 starts, earning $342,633 for owner Mercy Man Racing.