There were 5 graded stakes races at Belmont Park on Saturday afternoon, two of which were run on turf. Conditions were chilly for mid May on Long Island, with overcast skies and temperatures in the low 50's, with the main track fast and the turf courses good after light rain in the morning.

The feature race was the $700,000 Man o'War Stakes (G1), a 1 3/8 mile trip around 2 turns of the inner turf contest for older horses. Gufo was sent off as the 3-2 favorite in the field of 8, winner of the Belmont Derby (G1) then third in the Hollywood Derby (G1). In to challenge him included 2-1 second choice Sovereign, 3rd in the Bahrain International Trophy after finishing 8th in the QIPCO Champions Long Distance Cup (G2), and 6-1 third choice Field Pass, 4th in both the Mathis Brothers Mile (G2) and Maker's Mark Mile (G1).

Field Pass was quickest away through an opening quarter of 22.69 before 8-1 Channel Cat took over on the clubhouse turn through fractions of 47.53, 1:12.45, and 1:37.49 pressed by Field Pass and stalked by 90-1 longest shot So High. Turning for home Field Pass tired badly as Channel Cat continued to lead through 1 1/4 miles in 2:01.45. Favorite Gufo, 6th early under Joel Rosario, put in a strong 7 wide rally but Channel Cat, confidently ridden by John Velazquez, held him off to win by a nose in 2:13.34. It was a neck back to 13-2 fourth choice Moon Over Miami third. 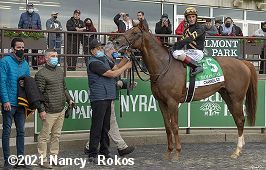 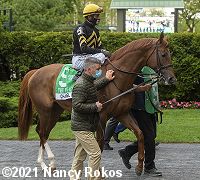 Left: Channel Cat in the winner's circle. Winning trainer Jack Sisterson said, "I left [the trip decision] in Johnny Velazquez's hands. I told him last weekend [winning the Kentucky Oaks and Kentucky Derby] was pretty incredible. I didn't sleep last night. I wasn't nervous about Channel Cat, I was nervous about letting John Velazquez down because I didn't want to ruin last weekend's celebrations."

Right: Channel Cat heads out of the paddock. Winning jockey John Velazquez said, "I didn't think we went that fast. I knew we were going fast, but not quite 22 and change. I gave him loose reins and he was a happy horse up front. I was happy with the way that he was doing things. I felt [Gufo] coming when I was asking him to run." 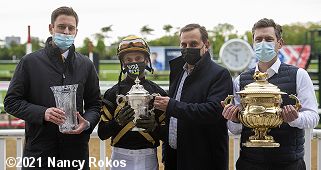 The trophy presentation for the Man o'War Stakes. Winning trainer Jack Sisterson added, "He was coming into the race in great shape. He ran a great race in the [Grade 2] Elkhorn off the layoff and finished up good, closing into fast fractions. We'll see how he is. I'm not ruling (the Manhattan) out. Maybe the United Nations [at Monmouth]." 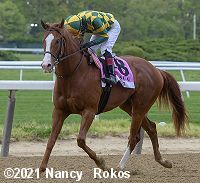 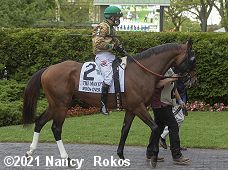 Left: Second place finisher and beaten favorite Gufo returns after the race. Trainer Christophe Clement said, "I'm delighted. Whenever you get beat first race off the layoff like that with such a good race, it's disappointing because I love the horse. Especially considering we were giving six pounds to the winner. But I tip my hat to the winner, he ran a good race. Gufo will improve from the race. We'll go to the Manhattan and just hope we don't have to give six pounds to everyone else, and go from there."

Right: Third place finisher Moon Over Miami leaves the paddock. Jockey Junior Alvarado said, "He's such a cool horse. He always gives you a good run. He always tries and no matter where you put him, he's always there for you. Eventually, I think he'll win a big race. He deserves it. He can do a lot of different things. He's been knocking on the door in some big races this year. He's definitely one with a future ahead of him." 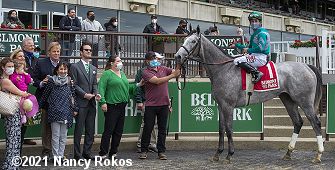 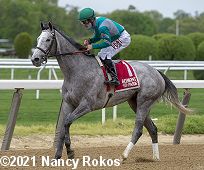 Left: Harvey's Lil Goil in the winner's circle. Winning jockey Junior Alvarado said, "I'm glad she's back and that she pulled out the win today. I still feel that she wasn't 100 percent, but she was good enough to beat this group today. She's an awesome filly to have back again and I'm looking forward to this year with her. There was a point around the half-mile pole where I checked to see where I was with my filly. At that point, I figured out when I was going to pick it up. If I was going to be worried, it was going to be from someone from behind. This was a nice race for her comeback."

Right: Harvey's Lil Goil returns after the race. Winning trainer Bill Mott said, "It's the way we thought it would play out on paper. [Platinum Paynter] figured to be on the lead. When she felt those horses coming from behind her, she held them safe. It looked like she still had something in the tank. It's a distance she's effective at, but I don't know if it's her perfect distance. Of course, I don't know that it was the perfect distance for [Civil Union] or the [Lemista] who finished second. She's been working consistently well. I'm very pleased with her works. I've seen some maturity and that's what you would expect." 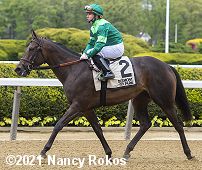 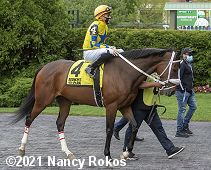 Left: Second place finisher Lemista returns after the race. Jockey Irad Ortiz Jr. said, "The pace was too slow. She's a nice filly. I think she'll move forward off of this."

Right: Third place finisher Platinum Paynter heads out of the paddock. Jockey Luis Rodriguez Castro said, "She always tries hard. We got a good second last time and now she finished third. I thought she did everything right. The other horses just fired up. I'm really happy with the way she ran. The trainer [Juan Vazquez] did a great job with her. She's running really well and I think she can win one of these races."