The $400,000 Ogden Phipps Handicap (G1) features some of the best older fillies and mares of the east coast going 1 1/16 miles around one turn at Belmont Park. Santa Margarita (G1) winner Joyful Victory was sent off as the even-money favorite in the field of 6 over 4-1 second choice Disposablepleasure, winner of the Sixty Sails Handicap (G3) at Hawthorne, and 9-2 third choice Tiz Miz Sue, second in the Apple Blossom (G1) after winning the Azeri (G3) at Oaklawn.

Jockey Rosie Napravnik sent Joyful Victory to the lead exiting the chute and she set fractions of 22.82 and 45.41 while pressed by 7-1 Authenticity just to her outside. On the far turn, Authenticity took over the lead from the tiring pacesetter, getting 3/4 in 1:09.57. Tiz Miz Sue, fourth early, moved up to challenge at the 1/8 pole, and after a brief duel to the line, Tiz Miz Sue prevailed by 1/2 a length in 1:40.81 over the fast main track. It was a length back to late-running 20-1 longest shot Centring third, while favorite Joyful Victory checked in fifth. 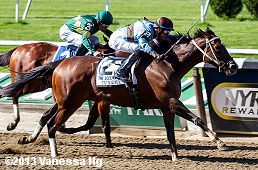 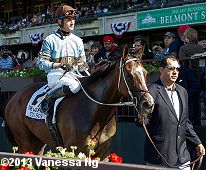 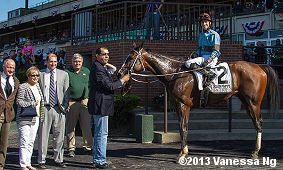 Left: Tiz Miz Sue takes her walk down Victory Lane. Winning trainer Steve Hobby said, "It's wonderful when it works. I was loving the fractions and Joe looked like he had an armful of horse all the way sitting back there. He just waited. He knows her very well. She was within range, that was the big thing. Sometimes she gets too far behind and can't quite make up the distance, but she was within range and they were cooking. She deserved a Grade 1 so bad and I was really going to be upset if she didn't get one before she retired." 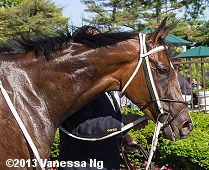 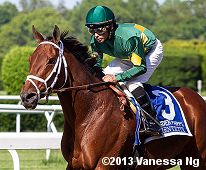 Left: Tiz Miz Sue returns to the barn after the race. Winning jockey Joe Rocco Jr. said, "When I saw Rosie have to lean forward (aboard Joyful Victory) on the turn and I was following (Authenticity), I got pretty confident, but this mare has fooled me a couple of times where I thought I was going to get past them. Once she ran by them, then I was confident. I'm friends with the trainer, and I've ridden this mare long enough that I've gotten to be friends with the owners. This win means a lot to everyone."

Right: Second place finisher Authenticity returns after the race. The 7-1 shot stalked the pace early under jockey Mike Smith, bid for the lead on the far turn, but was outfinished. The Todd Pletcher trainee improved her record to 3 wins, 3 seconds, and 1 third in 8 starts, earning $393,362 for owner Padua Stables. 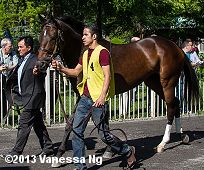 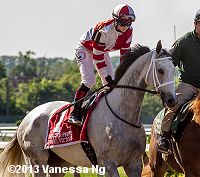 Left: Third place finisher Centring in the paddock. The 20-1 longest shot was last early under jockey Joel Rosario, then rallied to get third beaten 1 1/2 lengths. The Tom Albertrani trainee improved her record to 2 wins, 4 seconds, and 1 third in 10 starts, earning $194,102 for owner-breeder Darley Stable.

Right: Fifth place finisher and beaten favorite Joyful Victory in the post parade. The even-money choice set the pace for the first 5/8 mile under jockey Rosie Napravnik but tired in the late stages to finish fifith beaten 11 1/2 lengths. The Larry Jones trainee has a record of 6 wins, 5 seconds, and 3 thirds in 18 starts, earning $1,102,679 for owner Fox Hill Farms.

The $300,000 Acorn Stakes (G1) featured a field of six 3-year-old fillies going 1 mile around one turn of the main track. Sunland Park Oaks winner Midnight Lucky was sent off as the 11-10 favorite off her 5th place finish in the Kentucky Oaks (G1). In to challenge her included 8-5 second choice Kauai Katie, winner of the Old Hat (G3) and Forward Gal (G2) at Gulfstream, and 3-1 third choice Close Hatches, seventh in the Kentucky Oaks after winning the Gazelle (G2).

32-1 Momentary Magic was sent to the lead and set fractions of 22.53 and 45.28 while stalked by Midnight Lucky and Kauai Katie. On the far turn Midnight Lucky passed the pacesetter to gain a short lead through 3/4 in 1:10.02. Through the stretch, Midnight Lucky drew away from the rest of the field to finish 6 1/4 lengths in front of late-running Close Hatches in 1:35.11. It was another 3/4 length back to Kauai Katie third. 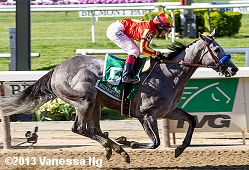 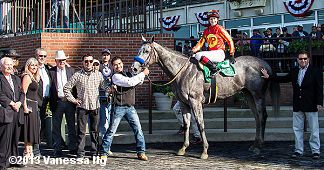 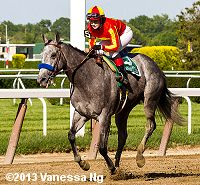 Left: Midnight Lucky in the winner's circle. Jim Barnes, assistant to trainer Bob Baffert said, "I was expecting (Kauai Katie) to be on the lead, not (Momentary Magic), but other than that it shaped up as I expected. I wanted to be sitting anywhere from 2 to 2 1/2 lengths off the pace, which we were. They were moving right along, and at no point did it look like she was struggling with the racetrack. She's just a really nice filly and we're so happy to train her. The plan right now is day by day. We'll go back to Churchill and go from there."

Right: Midnight Lucky returns after the race. Jockey Rosie Napravnik said, "We had a great trip. I really liked the post position and we were able to sit off the speed. Kauai Katie actually kind of had to sit back, so it was good for us, too. This filly just did it very easily and she's a very nice filly." 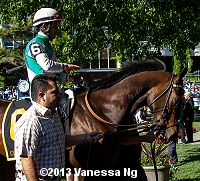 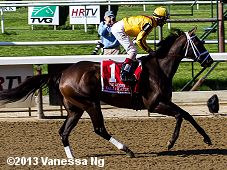 Left: Second place finisher Close Hatches in the paddock. The 3-1 third choice was last about 4 lengths off the pace early under jockey Joel Rosario, then rallied late to get second beaten 6 1/4 lengths. The Bill Mott trainee improved her record to 3 wins, 1 second, and 0 thirds in 5 starts, earning $271,300 for owner Juddmonte Farms.

On to the Met Mile and Sands Point Stakes also on the card.